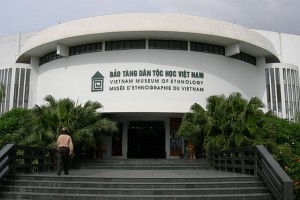 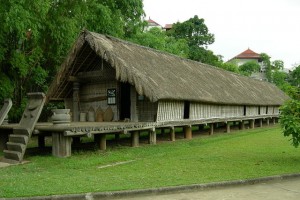 The Vietnam Museum of Ethnology (VME) in Hanoi is a place to preserve and exhibit the collections of the 54 ethnic groups who live in Viet Nam.

In 1978, the Museum Department was established within the Ethnology Institute that belonged to The Vietnam Social Sciences Commission (now the Vietnam Academy of Social Sciences). At that time, The Museum Department was assigned to prepare the future Museum of Ethnology. The Museum Department received 3000 objects from the National Museum of History, most of them costumes. In 1986, the Viet Nam Government approved a 3.27 ha area on which to build the museum. In 1990, the construction of the museum started and the office buildings were finished in 1995. In 1997, the exhibition building was completed with a total of 2,480 m2, including 700 m2 for collection storage. From 1978 to 1995 the Museum Department collected only some 100 objects. Since 1995 more objects could be collected and the museum now has over 25,000 objects and 30,000 films and videos. On November 12th 1997, the permanent exhibition was inaugurated. Exhibitions are arranged geographically and by language groups. In 1998, construction of traditional houses in the Open Air Exhibition started and the museum now has 10 traditional houses from different ethnic groups, representing the North, South and Centre; the Delta, the Mountains and the Central Highlands of Viet Nam. The Museum has had several international cooperation projects with the Musee de l’Homme in Paris, The Royal Tropical Museum in Amsterdam and the Osaka National Museum of Ethnology. It regards international cooperation as an important activity. Copyright of VCM Images courtesy of Wikipedia Wikipedia.