‘The exhibition Human Frames is dedicated to the human being, the condition humaine and the various states of mind that accompany man on his journey through life.’ This formed the introductory text in the Human Frames catalogue and the central theme during its premier exhibition and official opening at Kunst Im Tunnel (KIT), Düsseldorf.
http://www.flickr.com/photos/human-frames/5833284191/
Curator Silke Schmickl began her collaboration with Gertrud Peters, Museum Director of the KIT Museum, working around the concept of screening ten film programs in loop while displayed on tunnel walls and television screens in the context of an exhibition. The objective is to enable the works to interact with one another through the contrasting aesthetics in visual-audio language and wide diversity of perspectives, each a representation of the artist self expression, to form a sentimental portrait of human emotions and human sensibilities.
http://www.flickr.com/photos/human-frames/5833313351/
One particularity of the exhibition was the juxtaposition between space and content. A dim underground tunnel once utilized as a motorway today facilitates a traffic of ideologies, psychologies and cerebral activity through the medium of contemporary experimental film and video art.

The unconventional space takes the viewer out of his everyday routine and surrounds him with ideas that challenge his own understanding of the spectrum of human emotions experienced throughout life.
http://www.flickr.com/photos/human-frames/5833386355/
Highlighting of the opening night was a live performance of Black to Comm improvising the sound design to Ho Tzu Nyen’s film 'Earth' through a combination of ethereal and pulsating soundscapes. This paid tribute to the inter-connectivity of visual and audio that has the ability to integrate and stimulate a multi-sensorial response that transcends the applied information of the films into a greater tonal experience.

The success of the exhibition is shared together with associate curators Masayo Kajimura, Stephane Gerard, Victric Thng and Francois Michaud. 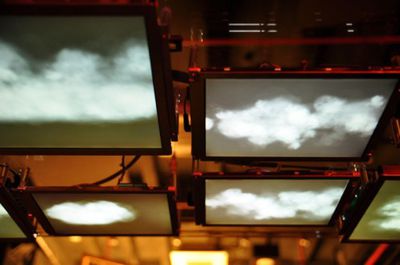