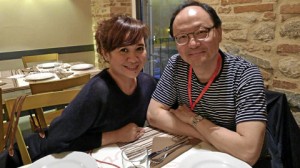 The 10th Hong Kong Asia Film Financing Forum (HAF) from March 19 to 21 is like a big “blind-dating” event where filmmakers meet with investors, producers, sales agents and distributors—hopefully to secure deals for their dream projects.

Roger Garcia, executive director of the HK International Film Festival Society (HKIFFS), said the pitching forum “matches” filmmakers with possible partners and allows them to hang out and hook up with colleagues all over the world. The forum, organized by the HKIFFS, is considered “one ofAsia’s most important film-financing platforms.”

“Getting in is tough,” Garcia noted. “Very competitive. This year we received 250 submissions, narrowed down to 32.” He said HAF prioritized projects that showed both artistic merits and financial viability: “A project should look promising on paper, but shouldn’t be unrealistic and expensive to produce.”

During the HAF, set at the Hong Kong Convention and Exhibition Center, each filmmaker will have a booth for half-hour meetings with investors, round-robin style.

But it’s not literally like a blind date, Garcia said. “A business matching division first studies the projects and looks for people who may be interested.” HAF considers the track record and previous films of both parties, he said.

“This year, for the first time, Fox Studio will give HK$100,000 as first-look deal for Chinese-language films,” Garcia added.

Garcia advised Filipino filmmakers to study the scene carefully before applying for next year’s HAF. “Visit our website. Ask yourself, ‘Will my film benefit from a co-production deal?’”

“They should not worry about what foreigners would think,” Garcia said. “They should concentrate on the films they want to make and craft it the best way they can. If you make a good film, the buyers will come.”

(by Bayani San Diego, Jr. from the Philippine Daily Inquirer, with permission from the author)