At federal level, film grants are awarded in two ways: Department 3 of the Arts Division covers the area of film and media art (avant-garde and experimental film, artistic documentaries and innovative projects by young talents); under its auspices, but organised as a public-law corporation, the Austrian Film Institute (Österreichisches Filminstitut) is responsible for supporting full length feature films and full length television films. Since 1981, grants in the latter area have been subject to the Film Grants Act, which has most recently been amended in 2004.

In keeping with technical and artistic progress, the support of artistic and experimental films by Department 3 is not strictly restricted to the medium of film, i.e. a production can also be on magnetic tape, since film, magnetic tape and digital recording media are no longer completely separate which is true both of experimental films and of professional full-length feature films. The grants programme distinguishes between grants for non-profit associations and institutions, grants for events and investment grants. The Department grants contributions towards printing costs, work scholarships, and travel grants, supports the writing of screenplays, and contributes to production and/or distribution costs. Grants are of particular importance in the area of film and photo archiving, research and mediation.

Another grants option was created by the amendment of the KommAustria Act and the establishment of the Austrian Television Grant administered by RTR-GmbH. As of 2004, Euro 7.5 million will be taken from the subscription income and earmarked for the production of television films, series and documentaries by independent producers. The measures are designed to provide a new impetus for the Austrian film industry. 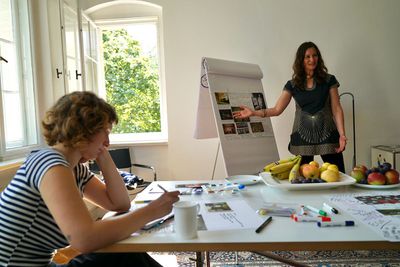