Magazine > The importance of preserving, restoring and promoting film heritage 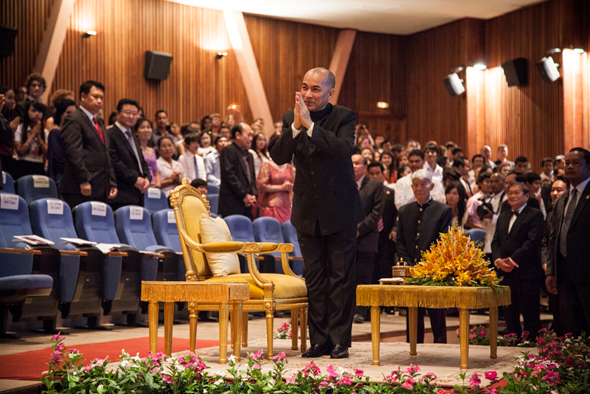 The Asia-Europe Foundation (ASEF) through its programme film.culture360.org, was one of the supporters of the Festival which was opened on 1 June with the screening of “La Joie de vivre”, a 1969 movie by the late King of Cambodia, Norodom Sihanouk. The opening event was attended by his son, HM King Norodom Sihamoni.

Both the Technicolor Foundation and the Bophana Center are involved in the preservation and promotion of film and audiovisual heritage as a reflection of the history and the culture of a country.


Today, over 90% of films around the world made before 1929 are lost forever. In many regions such as Southeast Asia, heritage films can be at risk: unstable political situations, lack of film archives and training in preservation, climate conditions (humidity and heat control) as well as lack of awareness are among the most common reasons.

The Memory! Film Heritage Festival was the occasion not only to screen restored films but also to bring together film archive professionals and organisations involved in film heritage to share their experiences and challenges and to encourage joint initiatives to better preserve film archives and make them available to the public.

On 2 June, the Bophana Center hosted the first conference of the Festival, titled “Film Heritage: risks and stakes”. The Audiovisual Centre was founded in 2005 by world known Cambodian Film Director, Rithy Panh. Incidentally, Panh had just come back from the Cannes Film Festival where he was awarded the top prize for his latest film “The Missing Picture”. Bophana collects the images and sounds of the Cambodian memory to make them available to a wide public. It also aims at creating capacity building and training for young Cambodians in this field.


Who is taking care of film heritage? What is more important, to preserve or to make these films accessible to wider audiences?

These were the main points that came up in the discussion among the speakers and participants. Some like Rithy Panh and Severine Wemaere of the Technicolor Foundation, stressed the necessity of making restored films accessible to audiences.  What is the point of having the film restored in the archives if the public can’t see them? In their opinion, these films can be considered the memory of a nation and apart from preserving them, they play a very important role in educating young generation to the history of their country.

Benedict Olgado from the Film Development Council of the Philippines pointed out that almost no films have survived from before the dictatorship of Marcos and that a lot of work still has to be done in terms of preservation of what has survived.

Chalida Uabumrungjit of the Thailand Film Archive was also concerned more about preserving than accessing. In Thailand, the number of films, documentaries and audiovisual material owned by the film archive is extremely large but still a good part of it has not been identified and catalogued. In her opinion at the moment, the priority should be given to restoration over accessibility. It is still vital to identify and catalogue the audiovisual material before it can be made accessible to the public. And this is often complicated by the lack of trained professionals available and the limited financial resources.

The lack of professional training for film restoration especially in Southeast Asia, seems to be a concern shared by many of the organisations and speakers. One of the new initiatives presented during the conference looks at establishing a Film Restoration School in Asia. It will be a six day school hosted in Singapore by the National Museum of Singapore, in collaboration with the Cineteca di Bologna, L’Immagine Ritrovata and Martin Scorsese’s World Cinema Foundation. The school will provide film preservation and restoration training to help safeguard shared cinematic heritage.

The programme of the school will replicate the successful model offered in Italy by the Cineteca di Bologna and L’immagine Ritrovata laboratory, who have designed the programme in Europe in the last 5 years. The Film Restoration Summer School in Italy fosters and promotes understanding and shared knowledge in the field of film restoration and preservation since 2007.

Overall, the conference provided a good platform to bring together film archives and film restoration professionals to discuss how to better synergise the restoration process with the importance of accessibility and reach to wider audiences.

Through its support to the Memory! Film Heritage Festival, ASEF continues to fulfill its mission of promoting exchanges and capacity building in film and among professionals in the field of film restoration and preservation.