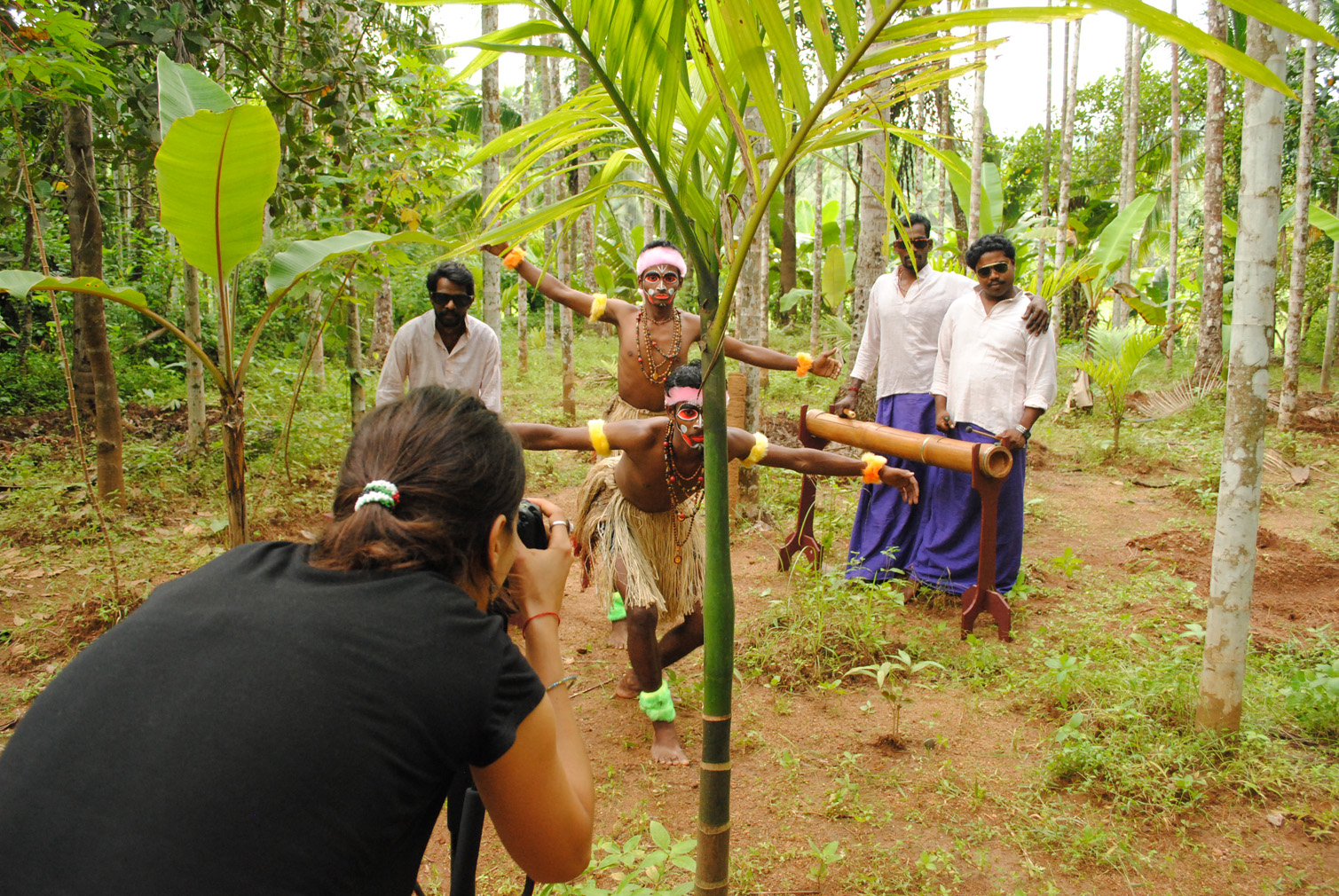 You might have bought back souvenirs from your last vacation, but re-creating a jungle when you return from Kerela – this is definitely a first anyone has seen in this part of the world. In a unique project hosted in South India, Reloading Images (a Berlin based art association) and Maraa (a Bangalore based artists collective) collaborated with the support of the Asia-Europe Foundation (ASEF) and Arts Network Asia (ANA) in the organisation of a month long residency where multi-disciplinary artists from different parts of the world, traveled on a experimental journey to understand notions of mobility, tourism, and hospitality.

Approaching mobility as an artistic process, reflection on the polarity between artist-tourists, understanding travel as a method of learning as well as a space for creative collaboration were the key questions that the artists asked in the initial phase of the residency, at a four day workshop in Kolar Distr 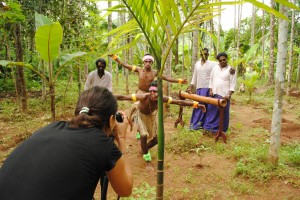 ict of Karnataka. This started the journey of the artists and organizers, which included a launch event in Bangalore, 13 days of travel around Nila River in Kerela and Anegundi in Karnataka, and a three day Open Studio, back in Bangalore which condensed the experience of the residency into a public art exhibition.

Reflecting on their journey, the group of artists representing countries from three continents - India, Italy, USA and Canada - were all exhilarated as well as awed by the activities they participated in and the locations they traveled to for the entire month. “This was an experiment for us to see if different artists can collaborate and work while traveling in different and sometimes difficult circumstances. The interaction within the group was very human, not only artistic,” described Carla Tommasini, the critical observer from Reloading Images, who produced ‘Passaging’ an experimental video that captured the conversational narratives that emerged during the journey. 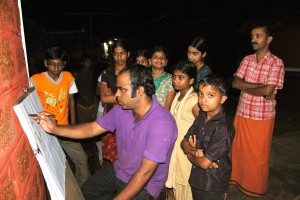 In the Open Studio, held at 1 Shanthi Road – an alternative art space in Bangalore the collective work of the artists took the shape of a satire graphic novel, an video of the journey, a Shadow Puppetry performance, a book on Politics and Aesthetics, a Wall Installation and text, two audio-visual installations, a collage exploring mobility and a three minute performance.

“I don’t think I have had as much coconut in my life as I have had on this journey”, quips Bhagwati Prasad, the Delhi based graphic illustrator. He adds, “During the traveling residency, ‘Jungle’ became the scene and ‘Tender Coconut’ was the recurring thematic. Thus it was easy to arrive at these subjects for points of common collaboration – even our lives in cities are urban concrete jungles.” Becoming Monkey - a video and installation that Bhagwati has pieced together with Enrico Sgarbi and Martina Moor creates a portrait of reality that is difficult to interpret unless one gives up the notion of understanding entirely. 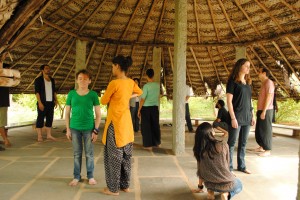 In another fascinating collaborations, artists Harsha Vinay from India and Louise Rose from Canada put together a puppetry show that enthralled the audiences. “We were inspired by the Tolpava Koothu group of Koonathara in Kerela, who organized a one day puppetry workshop for use. The stories of the puppeteers themselves – are a fascinating mix of myth, legend and fiction. The puppeteers in Kerela helped us put together the stories and shows, and this was about coming and working together across different cultures and languages,” says Louise who relished her second trip to India with this residency.

Looking at tourism within the context of art, was never easy and the participants were prepared to self critique their own notions and perspectives. “One of the words that emerge out of a short 18 day visit by European artists to rural India is ‘Superficial’. Harsha’s collage for example tried to explore the superficiality by reflecting on visual mobility on surface of things. Much of our work incorporated these similar conflicts that emerged from our journey,” explains Kaya Behkalam of Reloading Images. 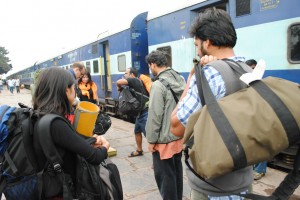 “There are some important learning’s we take out of this project – in terms of ambition, the manner in which questions can be posed and what can actually be achieved in a collaborative traveling residency, “ says Ram Bhatt from Maraa, who also traveled along with the artists. “We have interacted with these communities earlier – but this time it was in a completely different art context. The local communities were both puzzled and also forthcoming to share their culture and art with the artists,” adds Ram. “We see a lot of artists coming India, but a traveling residency which brings together so many different perspectives from around the world, is a first for us in many ways,” says Ekta Mittal from Maraa. “When we started the journey, we had a lot of questions. After coming a full circle – we haven’t answered everything but have even more questions,” she summarizes her experience on organizing this project. Over three days, as concerns and ideas around sustainable tourism, food cultures, language barriers, the gaze, polarities and mobility dotted the exhibit, both artists and organizers agreed upon a longer commitment to this project – through revisiting the local communities in the future, an interactive website and a publication.

Siddharth is a Bangalore based film maker and researcher. He is currently working with ALF - Sarai on an international project titled, "Towards Detente in Media Piracy", aimed at unraveling the cultural life of pirate practices and transforming urban media networks. He has been associated with Community Media for the past five years, having worked with marginalized groups on over 20 Participatory film productions in Gujarat, Maharashtra, Andhra Pradesh and Karnataka. He has also worked as producer for the US based Current TV and News 9, a Bangalore based news network. His current projects include the Bangalore Wonderwall, a public art project where he paints murals on public walls in city. 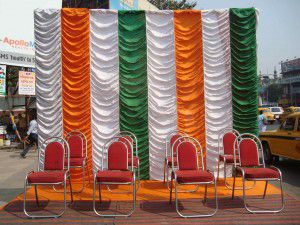 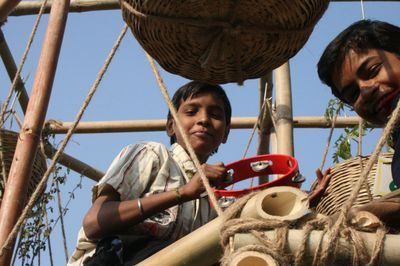 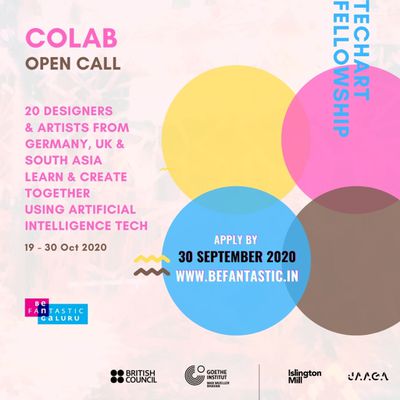