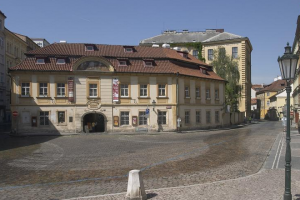 In 1862, prominent Prague cultural figure Vojta Náprstek, assisted by his mother Anna, established the museum in his private house with the aim to provide documentation of handicraft and industrial production and to promote technological progress and enhance the standards of Czech industry, crafts and trades.

His museum´s first exhibits were modern machines and equipment purchased in England during Náprstek´s visit to the World Exhibition held in London in 1862. That his initial aim had been different from the institution´s subsequent course – namely, that he had intended to build a Czech industrial museum – is evidenced not only by its original name, but also by the fact that he presented his own American collection, gathered in 1857 during an expedition to the Lakes and Dakota Indians, to the Museum for the Kingdom of Bohemia. It was to be moved from there to the Náprstek Museum only in 1921, as the latter institution´s programme of collections took its definitive shape. At the same time, Vojta Náprstek, with the remarkable support of his wife Josefa, endeavoured to promote and broaden the general scope of knowledge and opened his library to the general public. Náprstek, personally, and his museum soon became centrepoints around which the Czech intellectual élite concentrated. Frequent visitors included Czech researchers and explorers who would come to Náprstek´s home to get information, as well as to obtain understanding for their projects, often coupled with material assistance. They returned to share impressions from their voyages and expeditions, and they brought in their own collections. Thus came into existence the first systematic collections gathered in the field. Even though these artefacts form only a smaller part of the museum´s present-day collections, they do represent its foundation stones and a kind of gold treasure. In 1887, Náprstek erected a new building in the back section of his estate to house the growing collections. After Náprstek´s death (1894), his widow, Josefa Náprstková, was assisted in the museum´s administration by a board which operated under the aegis of the city of Prague and which ran the museum using a foundation that had been set up by Vojta Náprstek for that purpose. After Josefa Náprstková´s death, the board realized that the task of following the general development of the industries was beyond the capacities of a private endowment. Consequently, it slimmed the museum´s acquisition programme down to completing what was by then its most important section – the ethnographic collection. Clearly defined groups of objects were reposited to specialized institution (e.g. a collection of European arms to the Military Museum, collection of art and applied art to the National Museums´s Historical and Archaeological Departments and to the Museum of Applied Art, industrial items and technological equipment to the National Technical Museum, ethnographical items of Bohemian provenance as well as the collection of Slavic ethnography to the National Museum´s Ethnography Department etc.). In 1932, the museum was handed over to the administration of the Land of Bohemia and had assumed a new name, becoming the Náprstek Museum of General Ethnography. After the World War II, the museum was incorporated into the National Museum where it enjoyed a special autonomous status. Finally in 1962, on the occasion of the centenary of its foundation, the museum´s, thus far predominant, accent on ethnographic approaches was extended to embrace non-European fine arts, applied art, archaeology and numismatics, and the change of conception was projected into its new name: the Náprstek Museum of Asian, African and American Cultures. After World War II, came a new period of expanding the collections: since then the museum has acquired about two-thirds of its listed items collected or purchased by its curators, a trend which has been accompanied by a significant upgrading of the collections´composition, typological structure and documentation. For the sake of adequate storage of its collections and to make them widely accessible to the general public, the museum completely reconstructed Libichov Chateau near the town of Milník as the home for its permanent exhibition of Asian cultures and reserves (1977). The museum´s Prague building houses its permanent exhibitions of traditional indigenous cultures of North and South America, Australia and Oceania, as well as galleries for short term thematic exhibitions. In August 2002 Chateau Lib_chov suffered severely from floods but the collections could be rescued just in time. In preparing an overall reconstruction, the collection had been removed to reserves kindly lended by the National museum of Natural History, with the hope they would return soon to a new exhibition and upgraded depositories. The hope did not come true. In 2004, the chateau has been restituted and in 2005 handed over to the family of heirs of a former keeper of the estate. The museum is searching for new premises in Prague for its Asian and Ancient collections. Copyright of VCM