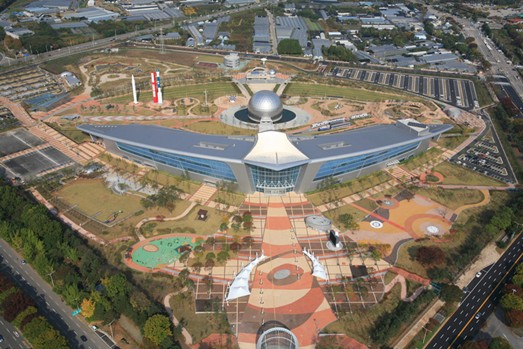 The Gwacheon National Science Museum (GNSM), the largest science museum in Korea, first opened its doors to the public on November, 2008, to enhance interest in science and foster creativity in children in Korea. The GNSM is fully supported financially by the Ministry of Education, Science and Technology.

There are five Science Halls in the GNSM, of which the Korean Traditional Science Hall has various hands-on exhibits including ‘Sundial’, ‘Daedongyeogido’ (a map of Korea in the 19th Century), ‘Hanok’ (a Korean traditional house), ‘Girigocha’ (a semi-automatic machine for the measurement of distance from 1441) and ‘Bigeo’ (Korean traditional flying vehicle from the 16th Century). Museum visitors can witness the wisdom and traces of Korean ancestors in science.

‘Saryogwan’ and ‘Hall of Fame’ also belong to the Korean Traditional Science Hall. Saryogwan, the Korean traditional library, holds permanent collections of Korean traditional literature, maps, and Korean archaeological artifacts including ‘Cheonsang Yeolcha Bunyajido’ (astronomical chart that copied constellations in the sky on paper in 1687). The Hall of Fame is to show the accomplishments of Korean scientists who have contributed to the development of Korean Science and to honor them.

Collection size: Over 40 artifacts Collection: Korean traditional literature, maps, and Korean archaeological artifacts including ‘Cheonsang Yeolcha Bunyajido’. Of what value is the ASEMUS network to your museum?

ASEMUS is a cross-cultural network of ASEM member museums. ASEMUS helps to promote mutual understanding between the people of Asia and Europe. Likewise, the GNSM has the same motto as ASEMUS, which is to pursue cultural diversity. The GNSM joined ASEMUS hoping that ASEMUS will help to spread more information and service of the GNSM’s collections to the public more easily.