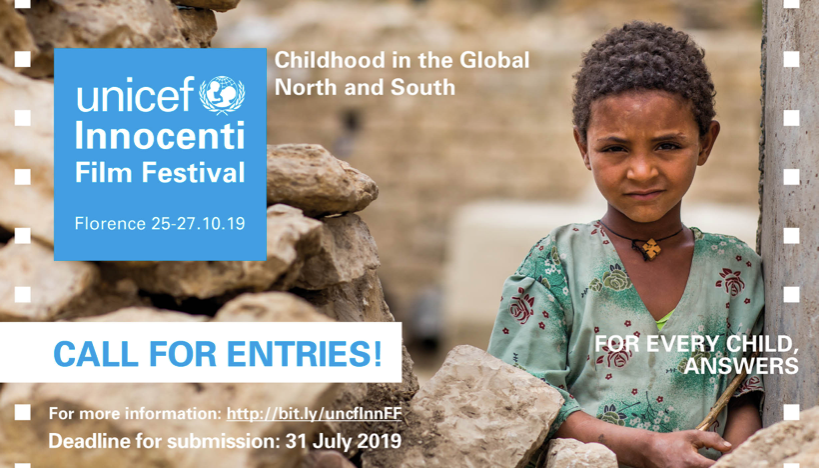 The inaugural UNICEF Innocenti Film Festival will be held in Florence, Italy 25-27 October 2019. A call for entries is open for the world's best current film video, multimedia with emphasis on young artists and the Global South. NOTE new deadline is 15 JULY.

Three anniversaries of global significance for children will align with important implications for the city of Florence in 2019:

To commemorate these "triple anniversaries," the inaugural UNICEF Innocenti Film Festival will be held in Florence 25 - 27 October 2019. The festival will showcase the world’s best current film, video, multi-media, with emphasis on young artists and the Global South.

IMPORTANT NOTICE: DUE TO THE OVERWHELMING NUMBER OF FILMS THAT HAVE BEEN SUBMITTED WE HAVE BEEN FORCED TO BRING OUR DEADLINE FOR ENTRY FORWARD TO 15 JULY 2019.

The aim of the UNICEF Innocenti Film Festival is to showcase the best world film and video on childhood. Entries to be included in the festival will promote deep reflection on narratives of childhood and the experiences that shape them – in the child’s individual life, in the family, the community, in institutions and societies of both the Global South and North.

The festival can only consider entries in English or with English sub-titles.
No film will be accepted for consideration by the UNICEF Innocenti Film Festival without the date of birth of the primary filmmaker(s).