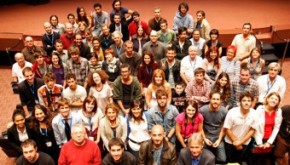 The International Film Students Meeting  will take place on Wednesday 26, Thursday 27 and Friday 28 September 2012 as part of the 60th San Sebastian Festival.

The International Film Students Meeting, organized by San Sebastian Festival and Tabakalera-International Contemporary Culture Centre of San Sebastian, proposes an exchange of audiovisual experiences and knowledge at one of the most important movie events in the world.

The Meeting has the backing of San Sebastian European Capital of Culture 2016 given that it is an obvious exponent of the scenarios and forms of work that this initiative wishes to promote.

Youngsters can show their short films, attend meetings with professionals and to the Master Class. The selected short films will be screened at showings open to the general public and Festival guests attended by professionals from the audiovisual industry who can chat to the students presenting their work. Their teachers will also have the opportunity to explain the audiovisual teaching methods employed at their centres.

Each candidate school can present three short films. Around 14 schools will be chosen to participate in the Meeting with screening of the works chosen from the three presented for selection.

A specific jury, consisting of students from the participating school and chaired by a personality from the world of film will choose the winner of the prize going to the director of the winning short.

This same Jury will also choose three directors who will have the opportunity to participate with their works in the next Cannes Festival Short Film Corner.

Projects can be registered from June 6. The registration form and other information on the International Film Students Meeting will be available from June 6 on www.eiecine.net. It will be available also on the official Festival website www.sansebastianfestival.com and on the oficial Tabakalera website, www.tabakalera.eu. The deadline for receiving short films is July 2.