A total of 14 projects from 10 countries have been recognized in this year’s UNESCO Asia-Pacific Awards for Cultural Heritage Conservation.  Awards went to projects as diverse as a boatshed in New Zealand, a lane in Lahore, a Singapore shophouse, a 19th century timber cottage in suburban Sydney and a Dutch modernist house in Bandung.

A panel of international conservation experts met in June to review 46 entries from across the Asia-Pacific region.

“Although there was no Award of Excellence given this year there was an overall increase in projects awarded which gives hope for a general rise in the standards of heritage conservation by non-state actors within the Asia-Pacific region,”  said Tim Curtis, Chair of the Jury and Chief of the Culture Unit, UNESCO Bangkok.

The restoration of the Saryazd Citadel, Yazd, Islamic Republic of Iran has been honoured with an Award of Distinction. The award recognized the commitment made by private sector partnerships to protect a unique historic desert complex, while providing significant socio-economic benefits for the local community through renewed employment opportunities.

The UNESCO Asia-Pacific Awards for Cultural Heritage Conservation programme recognizes the efforts of private individuals and organizations that have successfully restored and conserved structures and buildings of heritage value in the region. By recognizing private efforts to restore and adapt historic properties the awards aim to encourage other property owners to undertake conservation projects within their communities, either independently or by seeking public-private partnerships.

The winners were selected based on how the projects reflected a clear understanding and application of various criteria, such as the articulation of the spirit of place, technical achievement, appropriate use or adaption, and the project’s contribution to the surrounding environment as well as the local community’s cultural and historical continuity.

The Call for Entries for the 2015 UNESCO Heritage Awards shall be made in October 2014, and further details will be available on the awards website. 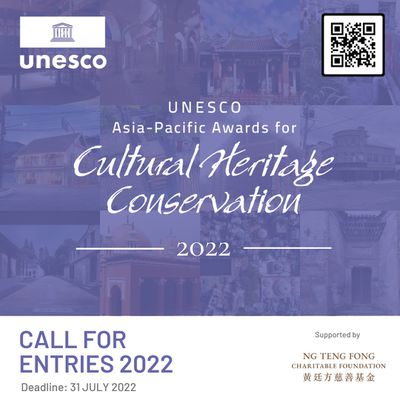