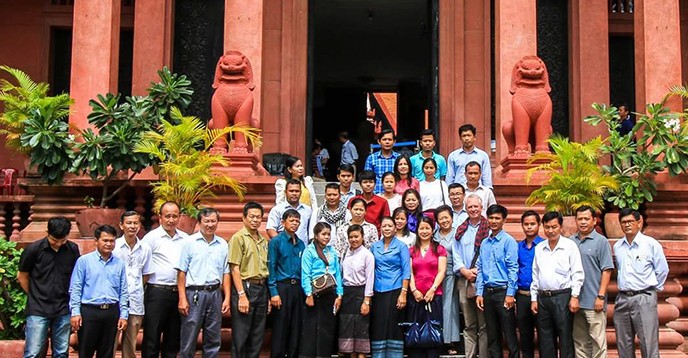 Continuing a partnership with the government of Cambodia that extends back to the 1990s, UNESCO recently organised a series of consultation meetings to support Cambodia in its efforts to document its cultural heritage, including it numerous museums, archaeological sites and the World Heritage properties of Angkor, Preah Vihear and Sambor Prei Kuk. Organised in cooperation with the Cambodian Ministry of Culture and Fine Arts, these meetings were held in Siem Reap and in Phnom Penh, notably at the National Museum of Cambodia, an ASEMUS member, on 27-28 July. This meeting gathered representatives from major museums and archaeological sites to evaluate the progress made since the last nationwide technical training, organised in 2009, and to identify persistent challenges and new issues. During this meeting, H.E. Mr CHUCH Phoeurn, Secretary of State of the Ministry of Culture of Cambodia, remarked that the documentation of museum collections and archaeological artefacts is fundamental to heritage safeguarding, as well as to maximising its potential for education and knowledge sharing. The consultation meeting concluded that the remaining challenges to heritage documentation in Cambodia could be overcome through the continued technical support provided by the National Museum of Cambodia, as well as through the nationwide training to be organised for all public museums in Cambodia in November 2017. Ms Nao HAYASHI, UNESCO’s Museums Programme Coordinator and moderator of the national consultation session, stated that the Cambodian initiative aligns with the 2015 UNESCO Recommendation concerning the Protection and Promotion of Museums and Collections, their Diversity and their Role in Society. The Recommendation underlines the important roles that museums play in society and invites Member States of UNESCO to comply with international standards regarding the documentation of natural and cultural heritage. The Recommendation’s mandatory implementation report is due in 2018.
For additional information about the consultation meetings organised by UNESCO in Cambodia, please visit http://en.unesco.org/news/unesco-supports-cambodia-documenting-its-heritage