Dance New Air festival takes place in Tokyo 1-10 October 2016, the 7th edition of the event, launched in 2002 as Dance Biennale Tokyo. It will feature performances of six dance works by Japanese and foreign choreographers and artists, as well as dance film screenings, a book fair and other events. Three premieres will introduce artists from the Czech Republic, France and the Netherlands to Japan. Before the start of the festival, there will be showcases and other programs introducing Japanese dance artists to foreign presenters in the second International Dance Network Program (IDN).
In the Dance ZAMAI Program for the festival opening, Kim Itoh’s Physical Theater Company GERO presents a new work titled The Game Named Family; KENTARO!! And his TOKYO ELECTROCK STAIRS company present their new work The Tether Going Round and Tying Front and Back Together; and Un Yamada’s solo piece Dictee (premiere: 2011) will be performed.
On the program of invited foreign works are three Japan premieres. Appearing in Japan for the first time the Czech Republic’s VerTeDance company performs Correction, a fusion of dance and live performance by a clarinet quartet; the Adrien M / Claire B Company (France) presents HAKANAÏ, a work combining digital art and dance performance; the Netherlands-based pianist Tomoko Mukaiyama presents her latest work, La Mode, which takes fashion as its subject. 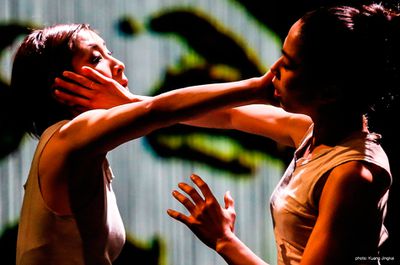