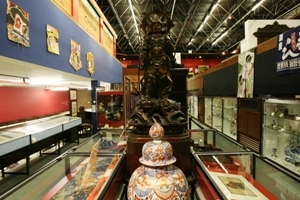 British Culture Minister Ed Vaizey has announced that the Oriental Museum will be one of 36 museums from across the UK to receive funding from the Department for Culture Media and Sport/Wolfson Foundation Museums and Galleries Improvement Fund. The grant, totally more than £80,000 will be used to help fund the next phase of the museum's redevelopment programme - new galleries dedicated to Japan and Korea.

The museum's Japanese collections are very rich and diverse. Most of the collection dates from the Edo Period (1603-1868 CE) and Meiji Era (1868-1912 CE) but there are also important pieces which date to earlier periods.

The Korean collection is much smaller, numbering only just over 300 objects and as a consequence the Oriental Museum has never had a Korean gallery. Despite its small size, this collection includes a wide range of objects from musical instruments to textiles, coins, weapons, ceramics and furniture. Some objects date back as far as the Koryo Period (935-1392 CE). The Oriental Museum has recently obtained funding from the ArtFund to create a new collection of contemporary Japanese art. This grant will allow the museum to purchase new contemporary material that can also be included in the new gallery. Planning and research for the galleries is now underway. Building work will commence in the galleries in January 2013 with the aim of opening the new displays in autumn 2013.