From 11 April to 10 July, the Croisements Festival of arts, culture and heritage from France plays host to 100 events in more than 40 Chinese cities, and invites nearly 1000 artists engaging in encounters with over a million people. The Croisements Festival aims to dazzle to Chinese audiences with the vitality and creativity of the French artistic and intellectual scenes, encompassing various disciplines such as cinema and theatre, dance and music, visual arts incorporating new media, literature and performances geared toward younger audiences.

The year 2014 is a fruitful one for the relations between France and China, as they celebrate the 50th anniversary of their diplomatic relations, a testimony to half a century of friendship, cooperation and mutual respect.

For the occasion, numerous events will be organized in China and France, reflecting the vitality and excellence of the relationship between our two countries. The Croisements Festival is one of the flagship occasions commemorating this 50th anniversary in China. Consult the full Croisements Festival programme with music, dance, theatre, circus, cinema, new media, literature, visual arts and debates taking place in over 40 cities across China, during the 3-month festival. Read more about the France-Chine 50 programme of events 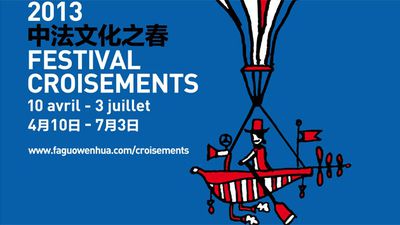