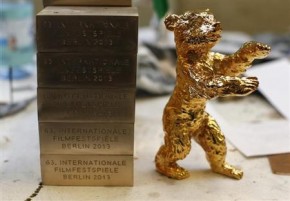 The 63rd Berlin International Film Festival came to a splendid close with presentation of awards this week! In a fantastic gala attended by over 1600 guests, the winners of the Golden Bear and Silver Bears, International Short Film Jury and the Best Feature Film were announced. Following the ceremony, the winner of the Golden Bear - Child's Pose by Calin Peter Netzer was shown as the closing film of the Berlinale. Festival Director Dieter Kosslick and the International Jury - President Wong Kar Wai, Susanne Bier, Andreas Dresen, Ellen Kuras, Shirin Neshat, Tim Robbins and Athina Rachel Tsangari presented the awards to the winner.

This year’s Berlinale has again been very popular with the public. A total of some 300,000 tickets were sold – that is, almost all the tickets available for the Festival. The “Berlinale Goes Kiez” initiative was also received with enthusiasm again: movie-goers used the opportunity to experience the Berlinale, which travelled with the Flying Red Carpet to seven arthouse cinemas in their neighbourhoods.