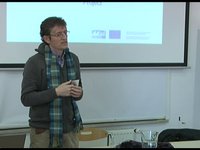 Culture and Economics: a counterintuitive pairing?

In Pau Rausell Köster’s words, culture has become more important than ever in addressing questions of sustainability and crises of the social and economic. Köster, an economist serving as faculty at University of Valencia (Spain) speaks of culture as a pioneering sector of innovation. While trying to delineate how policy focus on culture could contribute to economic growth, Köster presents culture as a better descriptor of phenomenon- since culture reflects “what is human of the human being” and aids in finding more holistic, applicable, tangible solutions or processes. Pau Rausell Köster’s emphasis is that culture contributes to fields like economy and governance by guiding our understanding of necessities in human living.

“I do not belong to the new religion, one that believes that culture can save the world”, Koster says and emphasises that a movement with cultural focus is not to be hyped as avant garde, but be poised in facilitating cross-sectoral dialogue. Being involved in the Sostenuto project supported by the EU, Köster referred to it as somewhat of an academic approach, one that hoped to study models of culture in development through economic and social innovation. For crucial cultural engagement in sectors of decision-making and governance, Köster mentions the need to demonstrate this relationship between culture and development, as it has been most inadequately studied and documented. Making references to the likes of Amartya Sen and Richard Florida, proponents of economic studies who differently marry cultural factors to economic growth, Köster describes the current status of cultural practice as a black box.

Culture as growth in Russia 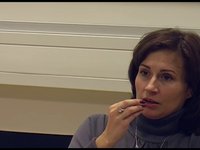 Pretty much set in this context, various academic and political inquiries hoping to probe the role of culture are exploring complementary threads but from different disciplinary standpoints. Surprisingly enough, new governance models in various European parts as well as post-soviet countries like Russia seem to be experimenting with culture at the core of regional development. For example, Natalya Velikaya, (head of Department of Political Science of Russian State University of Humanities) speaks of cultural intervention in certain culturally excluded Russian provinces.

Russian regional governance has been currently devoted to a new cultural policy where culture is considered to be a main resource for regional development. A radical approach in post-socialist Russia where culture has traditionally been financed last of all and considered an unimportant area for investment. A cultural policy focus in the Perm region of the Russian province is a three-year labour of love of a famous gallery curator & manager from Moscow, and a suave state senator, Velikaya shares.

Stating that cultural intervention was important in rejuvenating culturally neglected regions and for creation of new cultural spaces, regions that were excluded from cultural life were focused on. The aforementioned policy delineated re-building spaces, infrastructure, activities, funding, spaces and performances. One of the main areas of focus was the rebuilding of riverside station and transforming it into museum of contemporary art. Stating this as a first for Russia, Natalya Velikaya presents how Russian politics began to take seriously, culture for effective social intervention and inter-regional dialogue.

Pau Rausell Köster and Natalya Velikaya’s academic and field-based experiences bring is understanding of how culture is being linked to non-traditional disciplines like economics and governance, both in understanding and practice. Thus, cultural discourse is beginning to encompass initiatives, which work to better regional development by facilitating contemporary regional expression. Yet, going beyond betterment of cultural production, the role for cultural practice in trans-disciplinary milieux is also being discussed.  What performance artist Anika Barkan, has to say in this context seems to come from a place of practice and complements the above perspectives by calling for direct participation of artists in non-conventional areas like governance. 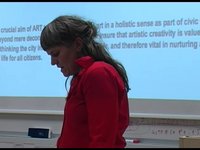 Anika Barkan, a performance artist, cultural activist and investigator from Denmark makes a point about a place for the artist to directly chair as core and participate in governance processes. Barkan argues for the abilities of artists to engage directly in processes, without being sidelined as producers of creative products or artworks alone. Anika Barkan, has been asking how artistic creativity can be more of a resource in a collaborative sense, and not just about producing artwork. If so, how could the artist engage in micro and macro processes of policy, decision making and governance? Barkan of course, mentions this in context of urban cities and urban space, and says that, ironically, the advertisement of the city as a phenomenon of expansion towards more togetherness paradoxically leads to cities of isolation. Given this, how does placing the artist at the center of planning and decision making aid toward a more sociable and habitable city? Barkan claims that to place the artist in the center of the process would demonstrate that art is not a luxury but an “indispensible mural for public debate that challenges and gives the citizen something to be proud of”.

Visual artists have always been involved in certain aesthetic decision making stages of executing plans for a city, but Barkan has asked and crucially so, how her performance practice could bring elements of experience, kinaesthetic experience into early planning stages. And how has this worked? Barkan currently continues dialogue with her municipal corporation in Copenhagen to experiment with this idea.

There seem to be multiple new, critical, and alternative experiences in the recent past, such as the experiences described above, from fields of art, activism and academia that document, discuss and share radical ideas, experiments and models. However, there are limited voices that are critical, emerging from state bodies. The need of the hour is to closely critique dominant models of growth and development and to seriously draw from alternative practices and lesser visible cultural maps.  More inclusive and qualitative methods of assessing regional, community centric, inclusive and sustainable growth need to emerge. Perhaps in this context, some interesting voices are speaking up.

Hélène Combe is sociologist and political scientist with the General Directorate of the Observatory for Public Decision (France). Speaking on Governance and New Indicators of Wealth, Combe argues that the forum needed to seek newer ways of understanding and expressing indices of wellbeing and meanings to wealth.

Speaking critically of wealth indicators like the much popular and only used Gross Domestic Product (GDP index), Combe called GDP an old tool for control which was invented in 1934, just to analyse financial circulation. Combe critiqued GDP also because of its technicality; it converted everything that was in financial flux to be a positive indicator of market. Suggesting newer starting points like the 1990-UNDP created index for social health, Hélène Combe comments on the very restricted notion of capital, and argues that an Indicator must have a social component.

Combe and others are crucial voices emerging from within the system, ones which seem to engage deeper than the dominant activist discourses that have been critical of industrial and hyper-urban modernity. In hearing such perspectives, experiments and their results, where culture seems to transcend disciplinary imaginations and hold cross-disciplinary negotiations, one sees hope. However, there lies a mammoth task- adapting and implementing relevant discourses and models in diverse pockets across the globe. These alternative views and models also need to be available more for public engagement, and appropriate and cultural media strategies allowing such examples to enter public discussion need to be planned.

The resources mentioned here attended and presented at the Ready for Change? Forum held in Ljubljana late 2010. This writer was in attendance. 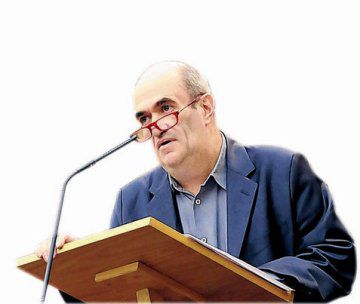