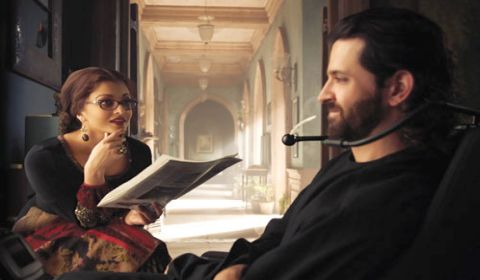 Presently, the Indian Film Industry occupies a position where a new gateway or dimension has opened. The Bollywood film industry is now creating movies based on rare diseases. Escaping from former genres, the directors are eager create new trends. Movies related to rare diseases now possess a place of great acceptance which makes it easy to disseminate information for all. This new approach, both conceptual and experimental, opens a wide range of unknown reality.

By providing information, these films help increase the awareness of a public normally ignorant of such diseases –causing them to treat the affected people badly and which, in turn, have a major impact on both the health and mental state of the patients. These conditions include “Alzheimer’s Disease”, “Anterograde Amnesia”, “Progeria”, “Asperger’s Syndrome”, “Dyslexia”, “Autism”, “Dissociative Identity Disorder”, “Paraplegia”, “Mental Retardation” , to name a few. Due to unawareness of the symptoms, we generally ignore the initial problems. This negligence can create a big problem for these patients, affecting their surroundings. Proper treatment and care can cure the patients and allow them to return to their regular lives. These informative movies help India move a step ahead towards new endeavors.

The film that introduced this new trend is “Koi Mil Gaya” (I Found Someone) by Rakesh Roshan, which was released in 2003 and dealt with the issue of mental retardation. A young man, mentally underdeveloped, tries to continue the work of his scientist father who died in an accident. Because of his condition the young man was unable to pass the qualification tests. Later in the film, he meets a creature from outer space which cures him of the disease. This is the first science fiction film in Indian film history. But this is also the first Bollywood effort to center on a character with a psychological problem. 2005 saw the release of “Black” by Sanjay Leela Banshali. The story is about a blind girl affected with Alzheimer’s disease, causing her to be sometimes too rigid in nature. Undisciplined, she sporadically loses control of her behavior. Her parents hire a private teacher for her studies. Initially, she does not accept him. But through persistent endeavor, the teacher helps her to develop manners, allowing her to eventually graduate. This feat was a great achievement for both of student and teacher. This film became very popular and was accepted by a lot of people, especially those who are mentally and physically challenged.

In 2007, “Taare Zameen Par” (Stars on Earth) by Aamir Khan was released. This work focused on Dyslexia. Being not up to the mark, studyw-ise, with like his elder brother, a boy is forced to tolerate the massive pressure of being constantly compared with his brother by their parents. This results in, despite his potentials, his regressing in both his studies and extracurricular activities. His parents never tried to find out the causes behind his poor performance and send him to a dormitory. Instead of getting support and sympathy, the boy is neglected. Fortunately, a teacher in his new school notices and takes great care of him, resulting in his recovery. This year, another movie named “Bhool-Bhulaiya” (The Maze) by Priyadarshan was released. It was about “Dissociative Identity Disorder”. It is a ‘psychological thriller comedy horror’. This is a disease that affects the person’s own identity. The film is about a little girl who loved to listen to fairy-tales told by her grandmother. Because of her imaginative mind, she gets so involved with the characters of these tales. This results in confusion between these characters and her own identity, and leads to her condition. Even after marriage, she continues to act beyond the norm, forcing other family members to treat her as mad. But it is also a curable disease.

In 2008 released “U Me Aur Hum” (You, Me and Us) by Ajay Devgan. This was also related to “Alzheimer’s” and “Brain disorder”. A girl with Alzheimer’s gets pregnant. The problem is pregnancy only exacerbates her condition. This year another movie “Ghajini” by  A.R.Murugadoss was released. It was adopted from an English film “Memento” (directed by Christopher Nolan) which was released in 2000. The original concept was inspired by Nolan’s film and the director made it twice, both in 2005 and 2008. It is related to amnesia and a character who is afflicted with both forgetfulness and a short-term memory lasting only for a few minutes. Previously, he was a normal, intellectual businessman. Due to a severe head injury, his condition arose. As the person does not remember the names and identities of other people around him, he invents a method to recall them. At home he writes the names, information and phone numbers of these people on the walls, as well as in his own body. He eventually gets cured.

In 2009, “Paa” by R. Bulki was released and dealt with Progeria, an accelerated aging disease. Progeria ages the body many times faster than normal without affecting the individuals intelligence,. Affected people become extremely frail with bodies that look a hundred years old, despite being in their teens. With this condition no cure has been known. In the end, the affected person dies. In the year 2010, “My Name is Khan” by Karan Johar was released. It was focused on “Asperger’s Syndrome”, a neurobiological disorder akin to autism. Here, the patient also became very rigid. This year saw the release of “Guzaarish” (Request) by Sanjay Leela Banshali on a person suffering from Paraplegia. The entire lower half of the character’s body is completely paralysed, usually caused by damage to the spinal cord. Despite this condition, and being imbued with great mental strength, the patient communicates with other people using shadow image/.

In the above-mentioned examples we note that these diseases are related to either mental or brain disorder. Many times we do not try to notice the psychological problems. Another main reason is most people are not even aware about of its symptoms. Because of the information these movies impart, the Indian film industry now gets strong support from NGOs, mostlt social workers and physicians. This can be called a turning point. A new era is going to begin. These movies are very sensitive in nature and become super hits in both the Indian and global market. All of these works are commercial movies. Escaping from the romantic genre, these directors are able to help the industry become a profitable business centre. Using an entertaining mode, social reforms can also be done.

These films are made after a long-term research about the diseases. Each film has received many nominations and awards such as National Awards, Filmfare awards, Stardust awards, IIFA awards, and so on. Also recipients of international awards, these films have done record business in India. With these honours, screenings continue a long time in cinemas.

Therefore, it can be said that audiences are now more aware of these rare syndromes -after their release, many people responded to their reviews in the print media. Many articles have been published regarding these syndromes. Even television soaps have started to detail these symptoms, as well as their related cures and solutions.. Thus, these films prove that the Bollywood film industry has been able to create a turning point in its history with this new trend.

Ms. Sudipta Sinha in an avid film enthusiast based in West Bengal, India.