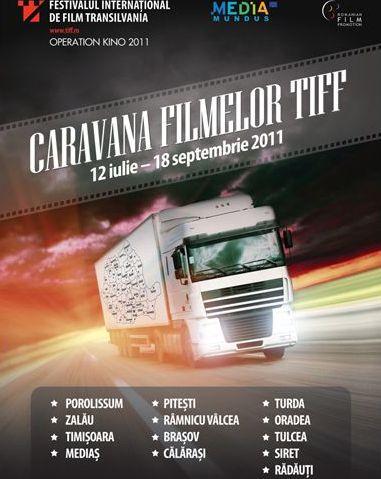 Operation Kino 2011 is a film-caravan action lasting till September 2011. The caravan crosses Romania, Bulgaria together with other neighboring countries in an attempt to bring the audience's attention back to cinema. The organisers of the Transilvania International Film Festival initiate this experiment, which is much more than an entertaining initiative. It is an action embed in the country's audiovisual distribution landscape where the opportunities to screen quality feature films are fast disappearing.

For this third edition, the operation received support from the new MEDIA MUNDUS funds, which help the distribution and circulation of European audiovisual works in non-European markets and vice-versa. With the film-caravan action, the Romanian organizers also aim to strengthen one of their festival sidebar: the EducaTIFF programme – an initiative in film education and media literacy.

Earlier, in 2007, the Romanian Palme d’Or winner Cristian Mungiu decided to organise a similar film-tour to reach the audiences in cities where no movie-theatres are left.


THE FILM THAT MADE YOU PROUD OF BEING ROMANIAN IS COMING TO YOU WHEREVER YOU LIVE, said the accompanying campaign.

Romania may be a country with a flourishing film production, but the cinema infrastructure is far from being adapted to a population of 22 million people. On a total of 400 cinemas at the end of the Socialist era in 1989, only 35 are still operating in the present.

The decline of cinema-houses, wherever it happens, is generally associated to the changes in social attitudes. These include the uses of new audiovisual tools, which allow interacting, transforming, and sharing films. For Cristian Mungiu, this is wrong:


The Caravan proved that if people don’t come to see films in cinemas, it is because there are no cinemas left, and not because they don’t want to go to cinema.

A large community of film events organizers shares Mungiu’s opinion. There was a variant of the Film-caravan organized last May on a train during the Czech Children Film Festival of Zlin. A Cinetrain is now calling young filmmakers to explore the Russian winter from Murmansk to Siberia. Screenings and film workshops are organized at schools, at hospitals and in prisons. In this regard,  the lack of adequate film distribution structures forces film event organizers to find new means to approach their audiences and as a consequence they are contributing to increase its film literacy.

In Europe, Media education was introduced at schools in the 1980s. But its importance in the formal and the non- formal education varies from one country to another. Yet, the debate on the role of the governments in Media Literacy has never been as important as today, considering that Internet brings children closer to the moving images in a much more interactive way than back in the eighties. The latter tend to learn manipulating digital tools two years before learning to read a text.

In this context, as part of the European Commission action to develop a sustainable media literacy policy and in the framework of the discussions about a future MEDIA Programme after 2013, the European Commission is currently looking at the situation of film literacy throughout Europe. Therefore it is calling for assistance in the form of report-mapping the current practices in film literacy in Europe. The Commission has launched an invitation to tender for a study and the deadline is 16th of September 2011.

For more details on the call for tender, please follow the link bellow:

The European Union adopted a new MEDIA Mundus Programme, a broad international cooperation programme for the audiovisual industry to strengthen cultural and commercial relations between Europe's film industry and film-makers of third countries.

KINOMATOVLAK – Films on Train at the Zlin Children Film Festival