“THE MALTESE FALCON” written by Dashiell Hammett (1929), was for long the only title where Malta was associated to cinema. Since the last decade however, the tiny Mediterranean group of islands is positioning itself as an attractive film location where new titles are now shoot on a yearly basis. Malta has recently joined in the European Union, which facilitates some of the production procedures. How did the integration of Malta facilitated the move of big productions such as “TROY”, “MUNICH”, “DA VINCI CODE”,” and EICHMANN” in January 2007 to the island? The Maltese authorities together with the Malta Film Commission are evaluating the development

Filming in Malta was attractive already before the integration to the enlarged Europe. Filmmakers have enjoyed what makes the island specific; Malta is an ancient British colony where English is still widely spoken. The working environment is said to combine the Anglo-Saxon precision to the warm Mediterranean-style of relationship. These advantages are appreciated by filmmakers from around the World. The others specific advantages of Malta come from its sun-light quality, with long hours and dry climate during the summer. Good natural elements are also found in the island limestone, which allowed selecting Malta as a unique doubling location in movies such as “MIDNIGHT EXPRESS”, and more recently in “EICHMAN”

“EICHMAN “is the last EU co production shoot in Malta in January 2007. The UK-Hungarian independent feature film production goes on the capture and the trial for genocide of the high-ranking Nazi Adolf Eichmann. The production arrived in Malta from Hungary. The interiors for the scenes of the trial and for the Buenos Aires apartment of Eichmann have been successfully carried-out in the Hungarian newly-open STERN large-film studios. For the exterior scenes, the East Street in Valletta (the Maltese capital) was covered by Israeli flags, doubling a Jerusalem road on a public holiday. Producers have been satisfied with the shooting saying that it went on perfectly well.

Finding a doubling location for Jerusalem was an obligation and not an easy task. With the principal photography set to start in Budapest in November 2006, and the film preparation scheduled during the summer 2006 Israeli-Hezbollah war; the insurances and the agents would have hardly accepted the project. Beside of the insurances questions, another important element had to be taken into account "You cannot cheat about Jerusalem; People know what it looks like!” recalled the line-producer. It is apparently the experience with Steven Spielberg’s film “MUNICH”, shoot in Malta the previous summer that convinced the all team to pack to the island.

SECURING THE FUTURE OF THE LOCAL FILM INDUSTRY

Filming in Malta was often associated to blockbuster productions that came on the island mainly for the use of its world-famous water-tank facilities located in Rinella. The Mediterranean Film Studio were known to provide a large range of special effects machinery that reproduce sea storms or apocalyptic hurricanes. If these mega-productions brought a considerable amount of MTL (Malta Liri) to the country, it appeared also that these productions alone would not help further developing a competitive local film industry.

A recent article published in the Times of Malta, by (PCP ) The Producer's Creative Partnership, points-out seven measures which are vital for the development of the Maltese film industry. Measures are needed to fill some lack in equipment facilities that obliges foreign companies to look abroad. Among others, Malta needs the construction of competitive sounds stages.  The increase of foreign films shoot in Malta requires the training of local staff.  Subsidizing of training schemes is one of the other pointed measures. The government launched a series of tax incentives and film rebates that need to be adapted.

Summarizing three main orientations for the smooth growth of a film business in Malta, the PCP proposes; the building of a national infrastructure, the training of the crews and the promotion of Malta abroad. These domains are all equally important “Neglect one of these three factors and the others will suffer.”

The message was apparently understand by the Maltese authorities. Speaking on February the 6th 2007 at the launch of the new revamped website of the Malta Film Commission, Minister for Investments, Industry and IT Austin Gatt said that 2007 is expected to be a bumper year for small and medium productions, which had been specifically targeted by the government, he said.

On the shooting in the Hungarian Stern studio

Malta doubling for the EICHMAN movie

A PCP report on the priorities for Malta's film industry 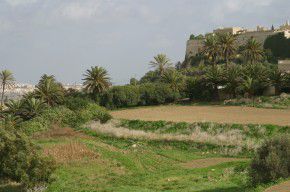 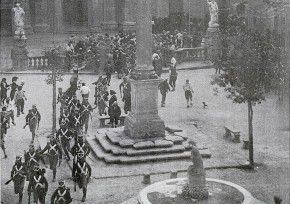