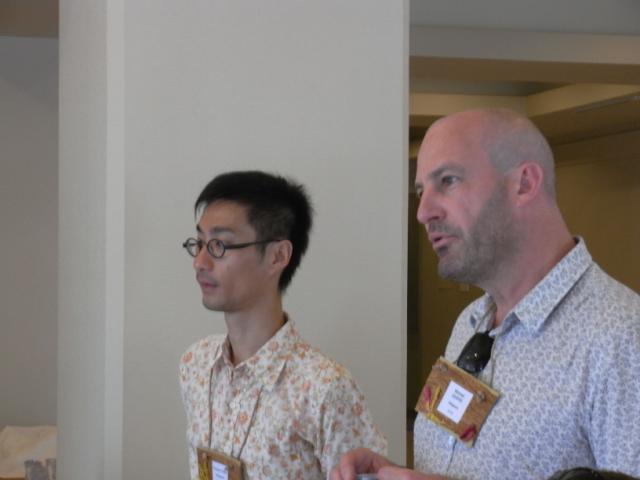 Since 2005, IETM, (The International  Network for Contemporary Performing Arts), has been instrumental in facilitating a dialogue between Asian and European cultural operators in the performing arts when it organised its first meeting in Asia in Singapore. Based in Brussels, Belgium, IETM initiates and facilitates opportunities for performing arts professionals to exchange information and learn about good practices.

Through organising more meetings in China (2006), South Korea (2007), Japan (2008) and Indonesia (2010), it has helped to contribute to a growing Asia-Europe and Asia-Asia network of like-minded arts professionals, often independent creative producers.

The recent IETM-TPAM Asia Satellite Meeting in February 2011 in Japan continued conversations started at the Creative Producers Initiative Network (Asia-Europe) which took place in the heat and heart of Jakarta alongside the Indonesian Dance Festival (IDF). The Asia-Europe Foundation (ASEF) supported the first IETM meeting in Asia in Singapore and the one in Indonesia. ASEF’s Assistant Director for Cultural Exchange Katelijn Verstraete talks to Michel Quéré, IETM Meetings Coordinator, to find out more about their initiatives in Asia.

Why has IETM been active in Asia since 2005 by setting up satellite meetings on different topics in different locations?

We perceived a need to bring together young, emerging, socially-engaged, smaller-scale, more risk-taking or pioneering individuals and organisations in Asia and Europe (i.e. not the big festivals or presenters). We call these people ‘creative producers’. They are usually independent producers who focus on emerging practices which link simple producing/presenting with more proactive artistic practices of dramaturgy and curating.

As is the case in Europe, Asia has many big cultural institutions. And the danger is that only big institutions can build up projects. We want to look at how we can support young, fragile, creative individuals to work together with these institutions to nourish them with fresh ideas and connect them to emerging practices.

IETM has a lot of creative producers in its network. We see a trend that more and more work is done on a project basis in the cultural sector in Europe. We assume that this could also be the case in Asia, but on a smaller scale and in the independent scene. People who are not from big institutions are linked more directly to artists, and act as independent producers, with artistic and curatorial affinity. Connecting such people from Asia and Europe is what we aim to do, so that they can mutually inspire and support each other and discover different models of creative producing.

How did the meeting in Indonesia come about and what were the results?

The meeting resulted from long discussions between independent creative producer Tang Fu Kuen, IDF and IETM. We invited around 30 creative producers for four days of discussions in Jakarta and three days of artistic visits in Yogyakarta. We wanted to create an experience which would serve to ‘bond’ the participants.

We experimented with a new format to avoid the ‘talking heads and listeners’ phenomenon and use the group’s own skills and experiences as learning materials. This ‘open space’ format gave the participants the responsibility to shape the agenda. 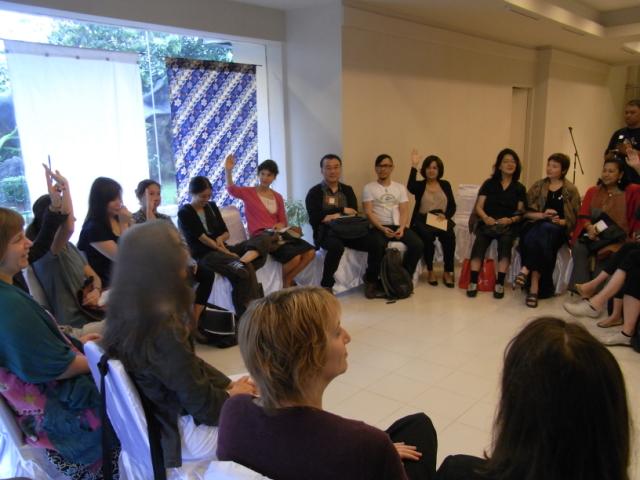 The topics we discussed were very diverse. They covered practical issues such as necessary skills, need for training and mentoring, networking, forming partnerships and co-production. Many discussions centered also on the social, political, economic and ecological contexts in which they work. Issues such as social intervention, creative resistance and the importance of taking ownership of public space are very different in Asia and Europe. A few of the producers also presented case studies which were discussed in detail.

An interesting result of the meeting was that the intention of the Asian creative producers to continue building an Asian network for the more independent producers, creators and presenters in Asia, who are able to have a dialogue on an equal level with similar networks in Europe. The idea for an Asian network started in the IETM meeting in Japan in 2008. They all decided to explore the opportunity further by coming to IETM-TPAM Asia Satellite in Yokohama in 2011.

How were the discussions further developed in Yokohama?

With the help of the Japan Foundation and TPAM, many people who attended the Indonesian meeting were invited to participate at Yokohama. Fu Kuen, Kyu Choi (director of Asia Now Productions) and Hiromi Maruoka (director of TPAM) were really instrumental in ensuring the discussion amongst Asian creative producers continued. It is important for Asians to meet in different Asian countries to break the isolation for people who can't travel. There is also a strong need to define their own contexts without the Europeans being involved.

An Asian Creative Producers Network (including Australia) was initiated by Kyu Choi and took place in conjunction with Performing Arts Market Seoul (PAMS). It is an informal network of people and very different from most existing Asian networks which are still being driven by government institutions. The Asian Creative Producers Network is a bottom up movement which uses existing events (performing arts markets, festivals, etc.) as occasions to meet and share.

The problem of funding Asia-Asia exchanges also surfaced and was further discussed in a session on mobility funds in Asia. There were a lot of participants from Asia who were not aware of what other funding schemes exist in Asia. Tay Tong, the director of the Arts Network Asia (ANA) talked about what they do to enable Asian-Asian collaboration through a small re-granting programme.

Some people said that TPAM Yokohama should become a yearly Asian Performing Arts Meeting. There is an idea to organise the next one alongside a performing arts platform in autumn 2011 in South Korea. It will be good to continue the discussion on funding in Asia then.

What are IETM’s future plans in Asia?

IETM wants to continue discovering Asia and connecting with this informal network of creative producers. We are considering setting up a “caravan” research visit to discover places the IETM network members don’t know yet. This could very well be Cambodia, Thailand, Taiwan or India.

But importantly, Asia needs to meet Asia. I agree with festival maker Frie Leysen that Asians should stop focusing only on Europe for opportunities and instead focus on themselves. If Europe can bring something, that is fine. But if Asians can get to know each other better, that will in the end also strengthen Asia-Europe collaborations.

Of course, it’s not so easy to connect in Asia as funding for regional mobility is lacking. This is very different from Europe where there is a political movement to connect Europeans to each other.

For Europeans, these IETM Asia Satellite meetings are interesting. They can learn about the diversity of Asia through the perspective of the country in which the meetings takes place. We also hope that more Asian producers can use IETM or other networks to come to Europe and discover more of its diversity.