Magazine > Between and betwixt: questioning Jogjakarta as a film community city

Between and betwixt: questioning Jogjakarta as a film community city There are lots of reasons for writing on Jogjakarta and its film culture: in Indonesian cinema history[i], Jogjakarta was listed as the second set-locations after Jakarta;  there was a special program called “Jogja on My Mind” in March 2008 for celebrating National Film Month[ii]. It not only consists of films shot in Jogja from 1951-2007, moreover, it’s a homage program to the city in functioning as a social setting.

Since digital video-making emerges in 2000, Jogjakarta has taken on the lead. Certain facts explain this phenomenon very well.  The majority numbers of Konfiden short film festival[iii] participants were students from Jogja, so were the winners. People from the industry acknowledge the influences the programme had in expanding their creativity and auto-didactic experience as countless events happen every year: workshops, productions, special screenings and a festival. As an attempt of internal critical review regarding the film community as an agent of change form, I will follow a talking journey with film communities’ pivotal person that casted the first stone in every film community field exists in Jogjakarta.

Back in 1999, we clearly understand that film is a communal work, each in its own sense. Yosep Angginoen, initiator of 56films, a community of high school alumnus formed in 2001, thought that it was an era where collecting living and opinion leader are necessarily needed. S/he usually is a creative field person, responsible for developing a strategy in finding and leading others to the green pasture. As for Nugraheni (Heni), the founder and director of Documentary Film Festival, dealing with new people every year is likely drawing a different picture of community with and among each others. The festival and the community must be connected, as the first performs its prophetical duty in spreading documentary as a film form.  According to Dyna Herlina, program director of Rumah Sinema[iv], being in a group who valued themselves through cinema work, is totally new way of life. Moreover, independent video making grew as a movement, where people experience film making not just as possible,  but as easy and affordable!

A major difference of fusing process brings the concept as in times, a changing. The earlier form consists of hang-out peer without job description neither form of objective; thus artistic preference and technical skill comes as result of trial and error series. Ferdiansyah Thajib, researcher for Kunci Cultural Studies Center, once wrote that “having the mutual interests to make film could easily fuse different individuals into a community as it can also be easily dispersed once these needs are no longer relevant.”[v] Team work replaces communal working concept. It requires individual skill performance; technical skill develops incredibly in this form but in consequence foreshorten the artistic process. 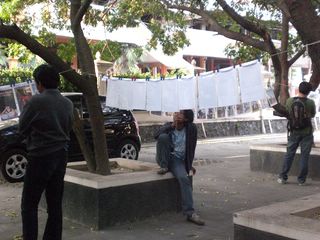 
This ontological change nonetheless boldly connects with earth quake in 2006, paralyzed city activities and took almost three years to get the feel back. Flooded with NGO policies, Jogja habitants celebrated video-making in varies form: participatory, video diary, community video, etc; introduced as trauma healing program. They leave main equipments behind; as some of their final aim is to empower video as an auto critic media[vi]. In terms of number, short video productions increase drastically. Internally, since they weren’t well equipped with distribution lines, people are getting tired of making and watching amateur video; longing to do something real filmic and extending eyes to somewhere less familiar then their own surrounding.

Video making and the City: what to deal about

Needless to say, along with its entire friendly ambience a city could offer, Jogja faces its limited stake: hardware availability and man power. At one point one should quits the town to gain new experience. Ifa Isfansyah one of FourColours Films[vii] founders, agrees with me. “It could be as simple as when cameraman has a strong urge to learn even touching, a 35mm camera, it’s not available here. How could people deal with that but quitting the town?” Some film communities’ members tricked it through working as production crew for big studios in Jakarta. Experiences then shared within circle then usually, practices on the next project. Ismail Basbeth and friends try a radically new format of team work named, Hide Project. Ismail questions the significance of being around the block for four years for his existence as director. In consequence, he needs friends whom possessed same requirements as he does; defined as peer ages or experiencing about same time span in community hood. Altogether they design one year project for developing themselves in whatever field they want to be fit in. Shalahuddin Siregar, unlikely most directors, wasn’t coming out of any community process. As for him, a finalist of documentary competition held by a TV station in 2005 then builds step from there, “It’s not with whom you work moreover how you see yourself while working in a certain circumstances. It’s the mentality that matters”.

This searching ends at a perpetual question. Does Jogjakarta film scene “only” deal with reputations, numbers of intertwine people and activities? Early December, Ifa made his home coming for Idul Adha and sms magic brought old folks together; twisted two reunion nights into intimate extradition forum for new films and work in progress. New program launched by FourColours Films “Belajar Bikin Film, di Jogja!”[1]punctuates the year 2010. Ifa admits the “In Jogja” as operational strategy: speaking of sources, knowing which strings to pull!  When I offered participation by giving film literacy class he realized lacked that knowledge in his early learning period. As time goes by, Jogja provides.

The two last conversations mark the substance both for this writing moreover for the scene’s future. Thought it sounds as paragon of virtue, how every generation existence set by forming peculiar initiatives according to each zeitgeist or specification as an act of “paying forward” of good vibes endowed by Jogjakarta; it pays the deal even though once flaming then rests in everyone’s memory.

[1] Film Making Course, In Jogja! is a short course of film making for public initiated by FourColours Films and going to be launched in Jogja in June 2011.

[iv] Rumah Sinema is a voluntary run based community, devoted in film and media literacy. Their ongoing program  is developing audience research and has been conducted for five years

[vi] By giving the basic skills and leaving equipment behind, the program wish to empower people in using video to see problems and find the solution within’ what is captured; an idyllic objective for maximum a year of process.

[vii] One of the first film communities in Jogja, born in year 2000,  FourColours Community counts for both their time existence and art achievements.

Berlin | In India and Far Beyond exhibition 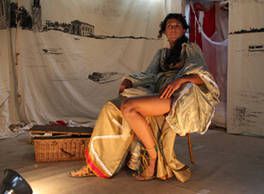