In a market driven by foreign blockbusters and where soap operas saturate local cinemas and TV channels, there seems to be little room for local film productions that are not likely to be commercially successful in Mongolia.

It was in this context, therefore, that the Arts Council of Mongolia, with the support of the Asia-Europe Foundation (ASEF) and the Open Society Institute organised the East Meets West Film Forum and Festival, in Ulaanbaatar, Mongolia, from 5 to 8 October. The event provided an opportunity for exchange and networking for Asian and European film makers and producers, especially those from Central Asia.

The Festival saw directors, producers, scriptwriters, production companies, film critics, nonprofits and policy makers as well as the public taking part in three key events. The Forum, which was moderated by two international film advisors, Mr Jeremy Segay (France) and Ms Gulnara Abikeyeva (Kazakhstan), reflected on “Challenges and Solutions for Better Filmmaking in Asia and Europe” and “International Co-productions and the Role of Festivals and Distribution”. In the day-long workshop Access to Success, emerging Mongolian film makers had the chance to interact with their international colleagues. And the free public film screenings highlighted international independent films and showcased innovative Mongolian ones.

As Mr Segay said, “The relevance of this project is very high. Mongolia is geographically isolated and its cinema is not distributed and showcased in international festivals. It takes an event such as this festival to provide exposure for Mongolian cinema.”

Differing Realities in Asia and Europe

In the Forum, the core of the debate focused on the importance of film education in Asia and the lack of support from governments for independent cinema. Before the mid-nineties, the Mongolian film industry mostly produced movies portraying patriotic, rural life and ideology-driven themes. The contemporary film industry in Mongolia is facing three issues, according to Mr B. Tumen-Ulzii, film critic and director of NTV Mongolia: “professionalism, copyright and distribution”.

“After 75 years of film production, the challenge is to adapt to digital film making. The young generation of film makers has limited access to laboratories and learning opportunities in film post-production, especially in sound and editing”. Cinema theatres showing 35 mm films have disappeared and film makers have switched to the digital form to better attract the public.”

The high number of young people who are producing video clips and advertisements for companies and organisations started to make film making an attractive profession in which to earn a higher income, pointed out Mr Tumen-Ulzii. The expectations were, however, not met and the consequence was that the sector absorbed many bad influences and talented people lost their chance to affirm their own artistic expressions.

In the absence of a strategy for national film policy and because of high piracy rates, copyright has become another obstacle for young film makers to participate in local film festivals to showcase their work, including the East Meets West Film Forum and Festival. “How can a person witnessing violation of copyrights every day be able to understand the importance of copyright?” questions Mr Tumen-Ulzii.

Closely connected with these challenges, the issue of distribution, which has become the responsibility of those who make the movies, needs to be addressed as well. According to Mr Tumen-Ulzii, fifty percent of the budget goes to distribution costs and the costs charged by the movie theaters is, most of the time, too large for film makers to bear.

Looking at other Asian and European countries highlighted more differences: Korean cinema, for example, is dominated by television shows and pop music videos, said Mr Segay. A quota system was introduced in 1972 which set aside 140 days of screenings in a year for local films, but it was recently cut by 50%, meaning 70 days per year. Nevertheless, between 1997 and 2006, one local film every year achieved a box-office record and caught the attention of the foreign media. Festivals like Pusan International Film Festival have also played a major role in introducing the Korean film industry to the world.

However, “out of 1,000 films, 30% are low budget, independent movies and 70% commercial films. There are no middle budget films”, states film director Min Kyu-Dong (South Korea). The industry has seen a rapid adaptation to new technology, sustaining the production of digital film. Actors are asking for bigger fees and films projects are sustained exclusively by the incomes generated by showcasing them in theater halls and distribution abroad.

In Thailand, on the other hand, there is an emerging independent film movement, pointed out Ms Anocha Suwichakornpong. Movies are shot in digital format and then translated to 35 mm films. In order to raise the profile of their films, directors invite famous local actors to play the parts. The industry has an imbalance in distribution of supporting funds: 50% of the Thai cinema budget went to sustain the production of just one movie.

Whereas in Europe, countries like France and Germany favour film co-productions and facilitate national or regional funding systems. In Germany, following a federal system, most of the film companies have offices in different parts of the country making funding opportunities more accessible to film makers.

Co-producing and the role of international film festivals

The Mongolian movie, State of Dogs (1998), directed and written by Peter Brosens and Dorjkhandyn Turmunkh, was identified by Mongolian film director Mr Byamba Sakhya as a good example of co-production with a foreign country. “It is the only film made in Mongolia and on a Mongolian subject” he stated. Co-productions like Mongol (2007), The Stone Council (2006) and Babies (2010) are examples of foreign film companies coming up with the idea and making the movie with Mongolians being only assistants in the whole process.

Co-productions are many times a matter of survival, pointed out Mr Daniel Khamdamov, commissioning editor, Documentary Films ARTE (France/Russia), “the only way to give a longer life to a movie struggling due to lack of financial support”.

But it is also challenging to find a suitable partner. “Trust is essential” added Mr Luca Rosant, producer and consultant, Mandra Films (France) and reinforced that co-productions are important because they assure a proper budget, a creative collaboration and a higher promotion of the film.

Film festivals were identified as important channels of distribution to showcase both feature films and documentaries that usually would not be shown anywhere else. Referring to documentaries, Mr Maciej Nowicki commented that festivals on human rights in particular rely on the sensitivity of the people towards human rights issues and they serve as a tool to raise awareness in order to influence perceptions and change the status quo. They also constitute a platform for young film makers to approach contemporary issues like air pollution, the consequences of the mining industry on the lives of the young in Mongolia as well as women’s role in society.

Mr Zagarjav Bayanzul from the Department of Culture and Art of the Ministry of Education, Culture and Science, Mongolia, who attended the Forum, expressed his interest in coordinating with the Arts Council of Mongolia in incorporating the Forum recommendations into a new policy strategy the Ministry intends to outline in the coming years.

The question-and-answer session that followed each screening reflected the lack of opportunities for the young Mongolian public to view highly artistic films inspired by real-life contemporary issues and demonstrated their desire for knowledge and liberation from blockbuster movie stereotypes.

During the Access to Success workshop, 10 young Mongolian film makers had the opportunity to present and discuss their projects with international film industry professionals in a pitching and mentoring session. The film ideas presented proved that an emerging generation of Mongolian film makers is mature enough to deal with current topics in their society such as the divide between the two worlds that dominate their country’s landscape: the nomadic culture, still strongly visible, and the influence of the western world on Mongolian people’s lifestyle, especially in urban regions. Other topics included a critique of the political class and society and an analysis of the consequences of a corrupt system on the development of society from political and social points of view.

The same eagerness to address political, social and economical changes was expressed by civil society representatives who were invited to attend the documentary film screenings in order to encourage deeper discussion of the issues presented in the selected films.

Summing up the event, Mr Rosant said, “The highlight of the festival for me was discovering the creativity of Mongolian talents as well as the state of the Mongol film industry. I also believe that our input was also valuable in terms of information and feedback on the international market. Yes indeed. I discovered great films (old and contemporary) and was able to understand better a country and its population. Thanks a thousand times for the given opportunity to discover Mongolia and its cinema. I can only look forward to go deeper into it.” 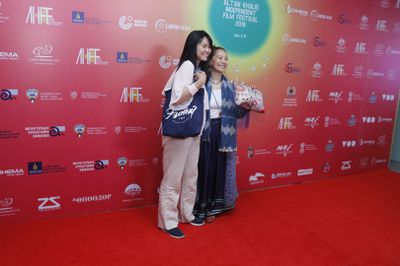