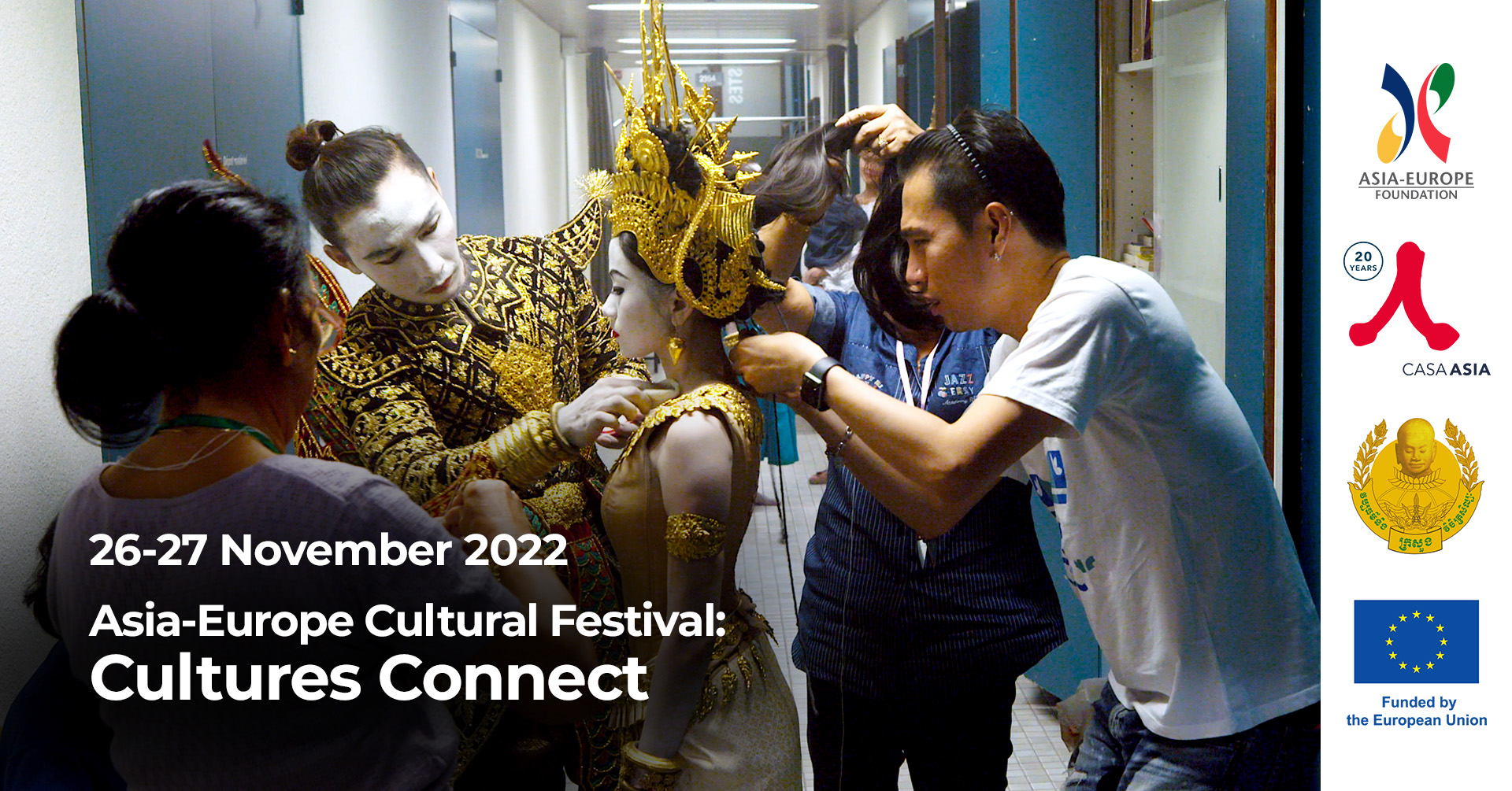 The Asia-Europe Cultural Festival titled Cultures Connect took place on 26 & 27 November 2022 at the Centre for Fine Arts-Bozar in Brussels, Belgium. The title of the festival, Cultures Connect, is embodied in ASEF's work as the organisation continues to support enhanced cultural connections between the peoples of Asia and Europe. Presenting film, dance, music, and dialogue, the festival is a platform for continued exchange and cooperation.

Amb. Toru MORIKAWA, Executive Director - ASEF, Amb. Nong Sakal, Mission of the Kingdom of Cambodia to the EU, and Mr Gunnar Wiegand, Managing Director for Asia and the Pacific at the European External Action Service (EEAS) joined the opening of the festival.

On the first night, the festival hosted the avant premiere of the documentary film The Perfect Motion that traces the creation of a production by Cambodia’s royal dancers called “Metamorphosis” and the history of the Royal Ballet since 1906. Infused with a sacred and symbolic role, the Royal Ballet dance form from Cambodia embodies the traditional values of refinement, respect and spirituality. Bringing Asian and European perspectives together, the film underscores the importance of appreciation for different cultures and celebrates the resilience of artists who firmly believed in their artistic expression. Xavier de Lauzanne, Filmmaker along with HRH Prince Tesso Sisowath, who was the Advisor for the development of the film, joined the screening and participated in a lively discussion with the audience.

On 27 November the public forum, What Future for Arts Festivals?, brought together leading practitioners from Indonesia, Italy, Singapore, Sweden and Switzerland. Festivals have been a powerful force in encouraging international artistic endeavours, showcasing cross-border cultural expressions, and fostering creative dialogues. Yet, today, arts festivals stand at a crossroad. In a post-pandemic world, they are faced with unprecedented social and economic challenges. What is the future of arts festivals as we look ahead? In the current landscape – one that will be defined by economic constraints, the continuing climate crisis, and structural inequalities – questions of equity, inclusion, responsibility and empathy arise. How will festivals adapt and cope with these altered circumstances? What responsibility do festivals have towards the environment? Festivals are challenged to change, perhaps for the better, and to re-examine their mission and their value, rework their systems of operation, and think outside the box.

The festival closed with the dynamic duo from Spain, Vignesh Melwani, singer-musician, and Carla González Ferrer, a singer-musician, who performed a free form improvisation piece with influence of diverse musical genres. Improvisuals is a unique piece of performance created with minimal and transcendental music blending influences from Indian classical to western classical, jazz, pop and Catalan music.

The festival will continue online in December, stay tuned!

The Asia-Europe Cultural Festival: Cultures Connect is a public arts festival, co-organised by the Asia-Europe Foundation (ASEF) and the European Union with the support of Casa Asia (Spain) and the Ministry of Culture & Fine Arts of Cambodia.