Magazine > The Art of Bestseller Adaptation and the New Bulgarian Cinema 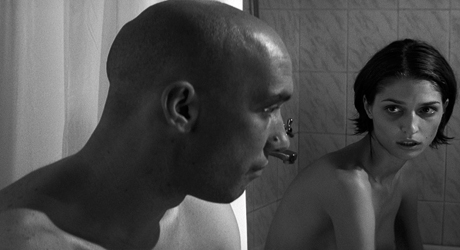 It would not be too much of an exaggeration to say that Chavdar ‘Chavo’ Tolomanov, a character in the novel, play and film Mission London, is representative for Bulgarian cinema of post-communist era. Having achieved some national recognition as a film actor, he has moved to London is search of international fame, only to become a petty swindler and end up as a street actor paid by a food company. Likewise, Bulgarian cinema has created some national icons, taking its share in the glasnost and perestroika process, and then attempted to adapt to the changed political, cultural and economic situation and go international, only to end up supporting second rate Hollywood productions and fulfilling state commissions. Luckily the last few years have witnessed the appearance of a new generation Bulgarian filmmakers. Though coming from varied backgrounds, they are all open to popular culture, advertising and international lifestyles, struggling to bring to terms their cosmopolitan identity with the strong audience demand for ‘national’ topics and positive self-esteem.

Not surprisingly, quite a few of these (relatively) young producers and directors seek inspiration in contemporary Bulgarian fiction, particularly in novels that have achieved market success and/or critical acclaim. Such is the case with Zift and The World is Big and Salvation Lurks around the Corner – Bulgaria’s 2009 and 2010 Academy Awards official submissions to Foreign-Language Film category respectively, as well as with the already mentioned Mission London (2010) – arguably the greatest commercial success in recent Bulgarian cinema.

Zift is perhaps the least typical of the three. It is a neo-noir, black-and-white, sophisticated tale of a young man called Moth convicted for murder and robbery in the early 1940s and released from prison in the 1960s, only to be poisoned by his former accomplice Slug, now influential member of the Communist Party. The film is permeated with allusions to themes elaborated by the alternative humanitarian culture of the late 1980s, of which the scriptwriter Vladislav Todorov was a prominent member. Classic postmodernism meets late Soc Art on every level – topical, narrative, verbal and visual – to create an ironic, anti-utopian reflection on freedom, identity and love.

A more organic conceptual unity between scriptwriter, director, scenographer, and cinematographer could hardly be imagined. In an interview Javor Gardev admits that Vladislav Todorov has been a major influence on him during his years as a philosophy student (parallel to his theatre direction training). On the other hand, Todorov has received a formal education in theatre studies and histrionic overtones dominate his writing. It is noteworthy that Todorov, a professor in cultural studies at the University of Pennsylvania, developed the script and the eponymous novel simultaneously, incorporating director’s ideas in both texts. Though there exist some differences between the book and the final script (including the story’s ending), the script is remarkably true to the novel (or the novel to the script?) in all respects.

As for the scenography, Nikola Toromanov has co-founded the Triumviratus Art Group together with writer Georgy Tenev and Javor Gardev and has designed the stage set of most of latter’s theatre works. Cinematographer Emil Hristow is not only the best and most innovative Bulgarian cinematographer but also close to members of the same Synthesis circle, co-founded by Vladislav Todorov, who introduces philosophical and aesthetical postmodernism in Bulgaria in the late 1980s.

It is no wonder such a philosophically and aesthetically challenging film received critical acclaim. Quite surprisingly however it is also appealed to the general public. The reason for this is the perfectly measured dosages of politics, history, philosophy, action and intrigue mixed in a plot that is all too familiar and yet abstract enough for most Bulgarians to be neither boring, not too demanding. The same mixture made it ‘translatable’ to younger or international audience who could enjoy the story without necessarily understanding all the political and philosophical allusions.

Easily recognisable cast and crew also contributed to the film’s success. Although it is their film debut, both Vladislav Todorov and Javor Gardev were already well know for their work (including in the US and Western Europe respectively) as well as for their clear political stand. The leading male part is played by Zahari Baharov, already popular for his roles in theatre, and the supporting actors are all familiar and loved in Bulgaria. An internationally famous model and society person (Tanya Ilieva) was engaged for the leading female part, contributing to the film’s appeal. 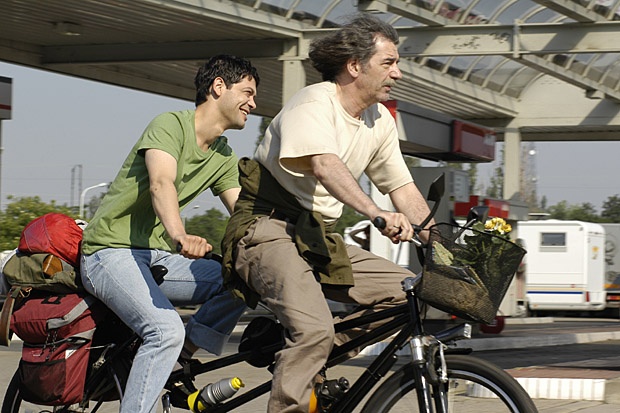 The World is Big and Salvations Lurks around the Corner shares a lot of features with Zift: it is a novel adaptation, it (partly) turns back to Bulgaria’s communist past, it was shot by Emil Hristow, it won a lot of awards, and it competed (even more successfully) for the Foreign Film Oscar. Its other features however make it representative for the current trends in Bulgarian cinema.

First and foremost, the writer collaborated with the director and professional scriptwriters in developing the script and the plot was significantly altered to become more compelling for the screen. Again it tells the story of a young Bulgarian-born German man who, assisted by an older male relative, makes a journey to his birthplace in order to rediscover his own identity. However, a lot of secondary characters and brilliant episodes from the novel have been omitted in the film, and the characters’ relations simplified. The political and psychological drives of the story have also been toned down, as well as the overwhelming irony and absurdity of the original. Thus the screen story becomes much more predictable, politically correct and even sentimental – none of which is characteristic of Ilija Trojanov’s novel. The ‘East-meets-West’ clichés play a strong role in the film, and most contemporary Bulgarian filmmakers obviously feel that these are the keys to international recognition and success.

In line with this view the film was co-produced with Slovenia, Germany and Hungary with an international cast on locations around Europe. Even the leading actors (playing Bulgarian émigré and his grandfather) are not Bulgarians and throughout the film several European languages can be heard. In fact it is likely that some of the plot changes might have been the result of co-production opportunities and financial restrictions rather than actual need for simplification, focus or ‘translatability’. All in all, the result is grander and more professional looking than any other film shot in post-communist Bulgaria.

With one exception. Mission London, based on the eponymous 2001 novel by Alek Popov has been undoubtedly the first ‘superproduction’ (of national significance) in Bulgaria in years and it introduced new funding and promotion patterns in the country’s cinema. Like The World is Big and Salvations Lurks around the Corner it is a co-production (of Bulgarian, UK, Hungary, Republic of Macedonia and Sweden), with international cast and filming locations. Like The World is Big… it is multilingual (English, Bulgarian, Russian, and Serbian). Like The World is Big… it relies heavily on the ‘East-meets-West’ clichés. Like The World is Big… the writer of the adapted novel collaborated with a professional dramaturge and the film’s director on the script. Unlike The World is Big… however Mission London is a comedy and it does not have an optimistic ending. It does not suggest ways to bridge the cultural and chronological gaps its characters are facing. Most importantly, its production team does not seem to share the view that any Bulgarian film should be A) funded by the state; and B) primarily aiming at being a work of high art. 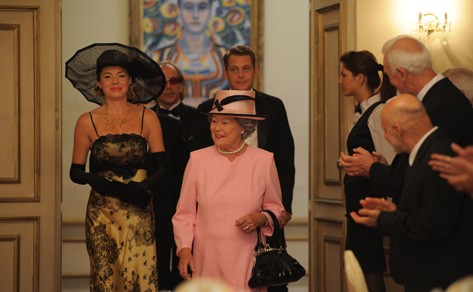 SIA, Mission London’s production company, is one of the largest producers of television commercials and popular TV programmes in Bulgaria, its portfolio including the national versions of Big Brother, Deal or No Deal, and Who Wants to Be a Millionaire. Director Dimitar Mitovski – a co-founder of SIA Advertising – has shot over 500 TV commercials. At the same time he is a leading Bulgarian avant-garde artist, just as scriptwriter Delyana Maneva is a noteworthy theatre director. As for Alek Popov, he has worked in the Bulgarian embassy in London, and has made a name for himself as a writer, editor, columnist and intellectual. Turning back to Mission London, it is the first feature film funded by a Bulgarian commercial TV channel (bTV) with the assistance of airline, beer and fast-food companies. The advertising background of the director combined with the fast-food company’s sponsorship in fact produced the major story flow of the film: the script was altered so that one of the fast-food company’s London restaurants to become significant place for the major male and female characters.

Despite this ‘gaffe’ all adaptations of Mission London – as a stage and a radio play, as well as a film – are exemplary. Being a political satire, the novel is both readily and risky transformable into another medium. At the time of its first edition the novel’s major characters were clearly recognisable. Even their names parodied the names or nicknames of public figures or were purely descriptive. Almost a decade later the meaning has shifted from the problems of the day to the unresolved issues of Bulgaria’s cultural integration in the European Union. A lot of details have been changed and a few story lines have been abandoned already in the theatrical version and they changed even more to better suit the screen. Again, the story lost characters, tangles, and literary references, becoming more straightforward and less politically charged. Dimitar Mitovski’s advertising touch made the film unusually fast paced and communicative. To top it all, a unparalleled promoting campaign, worthy of an advertising agency plus commercial TV channel, was launched and weeks before its official premiere Mission London was Bulgaria’s hottest topic.

So, what might a recipe for a Bulgarian film success be? Its major ingredient is perhaps a multilayered transition: in space, time, political and personal situation, preferably involving references to the country’s communist legacy without being overtly political. It should be wrapped up in an international, multicultural and multilingual net, preferably involving some international cast and an ‘East-meets-West’ story line. It should all be spices with a little (just a little) love, humour and a few literary and film references. A touch of theatre, photography or art seems to be a must, as well as a renowned cinematographer. If all goes well, the film then wins a couple of awards abroad, receives good media coverage and finally settles back at home, just as Banicharov, another of Mission London’s characters, where it lives happily ever after as a DVD release.

Lora Shumkova has completed a PhD programme in Bulgarian Studies at the New Bulgarian University (Sofia, Bulgaria). She has published over 100 articles on Bulgarian literary, visual and urban culture and has been the editor of a number of print publications. She has worked for “The Library”, “The Big Read” and “The Great Bulgarian Events of the 20th Century” programmes of the Bulgarian National Television and has authored the scripts of three documentaries. Her most recent creative and scholarly interests are film adaptations of Bulgarian fiction. 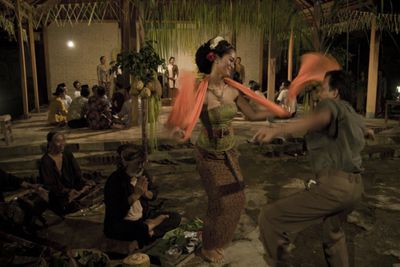