The Teloglion Foundation of Art was founded in 1972, when the art collection and the entire property of Nestor and Aliki Telloglou were donated to the Aristotle University of Thessaloniki.


The Teloglion occupies an impressive, modern, high specificatios building with a panoramic view over the Thermaic Gulf and Olympus, set in a large green park on the outskirts of the Aristotle University of Thessaloniki campus. It houses some notable collections, created by the husband and wife team Aliki and Nestor Telloglou in the spirit of philanthropy and serving the community.

As part of the largest university in Greece the Teloglion links research, teaching, scholarship, the child, the worker, the third age and art and culture in their broadest sense. Consisting of more than 7000 works, its extensive collection can to a large extent tell the story of modern Greek art up to the present day. In addition to important nineteenth -and twentieth- century artists, the strong points of the collection are its representation of abstraction in Greece and Northern Greek painters.

There is an exceptional collection of twentieth-century prints, complemented by smaller collections of sculpture, antiquities, Far Eastern art, ceramics, glass and textiles, while new donations are added on a daily basis.

The most important donation/research tool in the Foundation is the Library and Spiteri Archive, donated by Tonis and Ioanna Spiteri, which covers Greek and European art, especially Paris between 1945-1980. Other important donations to the TI include the Giorgos Mourelos Archive and the Marinos Kalligas Library.

From the outset (1999/2000) the Teloglion has not restricted itself to exhibiting its own collections, but has given the public and especially the young people of the city some important exhibitions (over 80 of them) often in collaboration with institutions from all over the world, but also with the principal museums and arts institutions in Greece. Its exhibitions, on a wide variety of topics, have always aimed to increase awareness of a number of issues in various sectors: e.g. The Euro a European Coin, Santiago Calatrava, The European Toy, Greek Shadow-Puppet Theatre (Karaghiozis), The D. Tsamis Bequest Collection, A Changing Greece, Cyprus1700-2000, Dinner at the Teloglion, Past and Present Occupations, Greek Artists at the Munich Academy, Kostas Andeou, Ancient Technology, Christos Kapralos, Theatre Costumes, Thessaloniki Broadcasting, Picasso Suite 347, Miro of Mallorca, Toulouse Lautrec, Goya engravings, Beethoven, The Louvre in Thessaloniki: Europe and Greek Myths, 16th – 19th centuries, Vasso Katraki in black and white, Wagner-Verdi: 200 years, etc. to quote but a few examples.

The Teloglion has been at pains to try out various ways of presenting its exhibitions to the public (e.g. dramatic play, interactive media, shock tactics, etc.), putting the emphasis from the outset on constantly up-dated educational programmes, parallel events and activities covering music, theatre, literature, dance, the culinary arts, technology, etc. Its (230-seat) amphitheatre can host conferences, colloquia, lectures and a variety of events. In the restaurant special offers and decoration are frequently coordinated with the rest of the programme. Special attention is paid to encouraging new collaborations and developing their proposals. 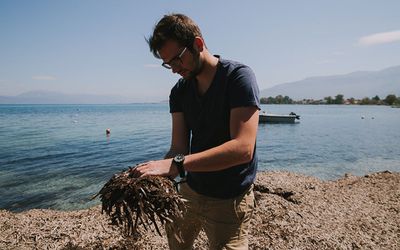