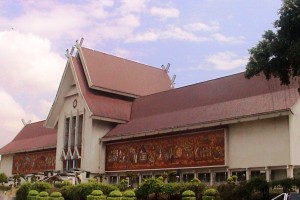 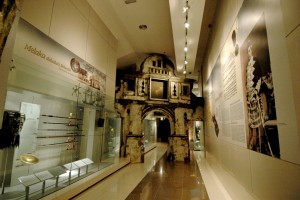 Located in the heart of the city of Kuala Lumpur and set amongst its neighbourhood of historical buildings and romantic parkland, the National Museum or popularly known as Muzium Negara is built in the style of a traditional Malay house. The grandeur of its traditional Malay architecture and its impressive façade is graced by two colossal murals of Italian glass mosaic, each depicting scenes of Malaysian history and crafts respectively.

The idea of establishing the Muzium Negara was initiated by the First Prime Minister of Malaysia Yang Teramat Mulia Tunku Abdul Rahman Putra Al-Haj. The present building was built on the site of the old Selangor Museum, which had been completed in 1906. During the World War II, a part of the building was accidentally bombed by the Allied Forces on 10th March 1945. From that date until 1952, Kuala Lumpur has no museum. A small single-storied wooden building was erected on the same site by order of the then High Commissioner, General Sir Gerald Templer, who officially opened it on 11th February 1953. Until 1959, it was demolished to make room for the new Muzium Negara. The museum was officially opened by His Majesty, the Third Yang di-Pertuan Agong, Tuanku Syed Putra Al-Haj ibni Al-Marhum Syed Hassan Jamalullail on 31st August 1963. The museum is a three storied structure of 362 feet long and 124 feet high at the central gable. It has four main galleries and a central hall which houses temporary exhibitions. Since its inception in 1963, the four main galleries showcase on ethnology and natural history of the country. The displays range from free standing tableau showing traditional cultural events such as weddings, festivals and costumes; to the rich variety of weapons, musical instruments, exquisite ceramics and natural history. The museum has undergone a major refurbishment for these galleries in 2006 and the makeover was completed in 2008. Now the four main galleries, namely Early History, Malay Kingdoms, Colonial Era and Malaysia Today feature history of Malaysia from prehistoric days to the present. A number of national treasures are on display in the galleries. These include the skeleton of Perak Man dated 10,000-11,000 years old – the oldest and most complete skeleton found in South East Asia, a bronze Bell found by a villager when leveling a mound for a house side which is believed originated from the Battambang region of Cambodia, and a bronze Avalokitesvara which dates from the 9th CE. Additionally, a fine collection of keris from the Malay world, silverwares, jewellery, textiles, archaeological artefacts, ethnological and historical objects are also featured in these galleries. Collections: Archaeological collections, Historical material, Ceramics, Textiles, Metalwork, Coins and Medals, Bronzes, Jewellery, Manuscripts and Maps