News & events > Webinar series: Culture in the Time of Covid 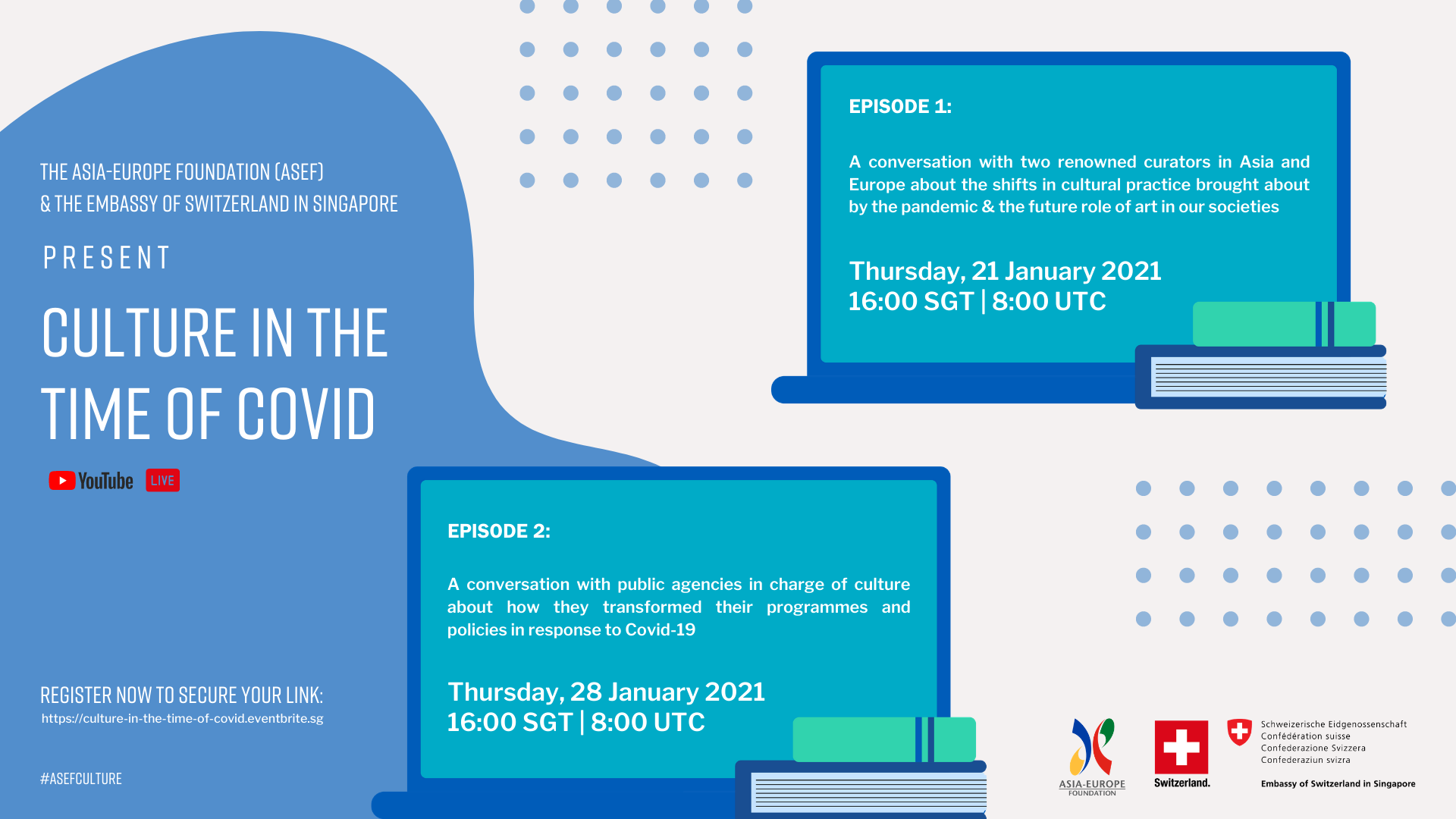 Update: Thank you to everyone who attended the webinars. Watch the highlights of the series in the video below!

The Asia-Europe Foundation (ASEF) and the Embassy of Switzerland in Singapore jointly presents 'Culture in the Time of Covid', a 2-part webinar series that aims to share how arts organisations and public agencies have adapted their programmes in response to Covid-19, and explore how cultural exchange and international collaborations in the arts will look like in the next few years. The conversations will be oderated by Anupama Sekhar, Director, Culture Department, Asia-Europe Foundation (ASEF), and broadcasted live on the ASEF YouTube channel. Register below to book your spot!

Culture in the Time of Covid:

In our first webinar, we talk to two renowned curators about the shifts in cultural practice brought about by the pandemic & the future role of art in our societies. The conversation hopes to address some of the pressing issues of our times: how is the cultural sector managing this emergency situation? Is there a spirit of solidarity? How will the pandemic affect the financing of culture in the coming years? What will cultural exchange look like in the next 3-5 years?

Diana Campbell Betancourt is a Princeton educated American curator who has been working in South and Southeast Asia since 2010, primarily in India, Bangladesh, and the Philippines. She is committed to fostering a transnational art world, and her plural and long-range vision addresses the concerns of underrepresented regions and artists alongside the more established in manifold forums.

Since 2013, she has served as the Founding Artistic Director of Dhaka-based Samdani Art Foundation, Bangladesh and Chief Curator of the Dhaka Art Summit, leading the critically acclaimed 2014, 2016, 2018, and 2020 editions. In addition to her exhibitions making practice, Campbell Betancourt is responsible for developing the Samdani Art Foundation collection and drives its international collaborations ahead of opening the foundation’s permanent home, Srihatta, the Samdani Art Centre and Sculpture Park in Sylhet.

Concurrent to her work in Bangladesh from 2016-2018, Campbell Betancourt was also the Founding Artistic Director of Bellas Artes Projects in the Philippines, a non-profit international residency and exhibition programme with sites in Manila and Bataan, and curated Frieze Projects in London for the 2018 and 2019 editions of the fair. She chairs the board of the Mumbai Art Room and is an advisor to AFIELD, a global network of socially engaged artistic practices. Her writing has been published by Mousse, Frieze, Art in America, the Museum of Modern Art (MoMA) among others.

Michael Schindhelm is a German-born Swiss national based in Ticino, Switzerland. He is a writer, filmmaker, curator and a cultural advisor for international organizations (including Dubai Culture & Arts Authority, UAE; West Kowloon Cultural District, Hong Kong; Strelka Institute, Moscow; Skolkovo Innovation Center, Moscow; Zurich University of the Arts, Zurich; European Capital of Culture Dresden 2025, Germany; Tempelhof Projekt, Berlin, Germany; and Diriyah Gate Development Authority, Riyadh, Saudi Arabia). Michael served as the CEO of various theaters and opera houses in Germany and Switzerland from 1992 - 2007, among them Theater Basel (1996 - 2006). He was also the founding director of the world's largest opera organisation, the Berlin Opera Foundation (2004 - 07) and the founding director of the Dubai Culture and Arts Authority (2007 - 09).He is married to Singaporean cinematographer Yawen Schindhelm-Yeo (trueorigin.net). More information on his work: michaelschindhelm.com/en

In our second webinar, we discuss with public agencies in charge of culture about how they transformed their programmes and policies in response to Covid-19. What were some of the mechanisms & challenges involved in adapting their programming? What are the most creative digital projects they encountered in 2020? What will the next 3 years look like, particularly for international cultural co-operation?

Philippe Bischof has been the Director of the Swiss Arts Council Pro Helvetia since 1 November 2017. After studying in Basel, Switzerland, he began his career as an assistant stage director at Theater Basel, and subsequently worked as director and dramaturgue in Switzerland and abroad both at theatre institutions and in the independent theatre scene. During this time he also served as a jury member for theatre and dance at the Senate Chancellery in Berlin and acquired a Master of Advanced Studies Degree in Cultural Management from the University of Basel. From 2008 to 2011, Philippe built up the cultural centre Südpol in Lucerne, working both as Manager and Art Director. In 2011, he became Head of Cultural Affairs in the canton of Basel-Stadt, a position he held until 2017. From 2016 to 2017, he additionally served as Chairman of the Cantonal Culture Ministers’ Conference (KBK). Philippe is also regularly called on as a lecturer in cultural policy and art promotion.

Yves Fischer is the Deputy Director of the Federal Office of Culture (FOC) Switzerland since 1 June 2008. He is in charge of the FOC's operational management and is responsible for implementing the Confederation's culture policy. A lawyer and musician by training, he joined the FOC in 2002. He has been involved in the drafting and implementation of various legislative projects relating to culture both nationally and internationally. From April 2006 he headed the international cultural assets transfer unit and looted art office at the FOC. Here, his tasks included negotiating bilateral treaties and dealing with a number of cases involving looted art. After studying in New York, Bern and Paris, Yves Fischer completed a master's degree in cultural history and culture management at the Sorbonne. Prior to joining the FOC he was a legal consultant to the United Nations Educational, Scientific and Cultural Organization (UNESCO) in Paris. While studying in Bern he also taught at a music school in the city.

Paul Tan is the Deputy Chief Executive Officer (Planning and Corporate Development) at the National Arts Council Singapore which champions the arts by nurturing creative excellence and supporting broad audience engagement. Through comprehensive support from grants and partnerships to industry facilitation and arts housing, the NAC ensures that the arts inspire Singaporeans, connect communities and position Singapore internationally. Paul joined NAC in 2011 as the Festival Director of the Singapore Writers Festival and Director, Literary Arts, and helmed four editions of the successful literary festival, while overseeing the development of the national literary arts landscape. He currently sits on the boards of the Singapore Chinese Orchestra, the Singapore Symphony Group and the Singapore Chinese Cultural Centre. Paul has also published five volumes of poetry; the most recent “When the Lights Went Off” was launched in August 2018.

Anna Arutyunova joined Pro Helvetia in 2016 as Head of the Moscow office. From January 2021, she is the Head of Global Network and International Affairs sector in Pro Helvetia based in Zurich, Switzerland. After studying history at the Lomonosov Moscow State University, she began her career in arts media, collaborating as writer and editor with publications on art and culture such as Openspace.ru, Art & Auction Russia, Vedomosti.Friday, Art.sy, The Artnewspaper Russia, and Arterritory.com. In parallel, Anna was engaged in research in the field of cultural economy and art market, and regularly lectured on these topics. In 2015, she published the book "Art Market in the XXI century: The space of artistic experiment" with Higher School of Economic Publishing House (Moscow). Before joining Pro Helvetia, Anna worked in the arts and culture scene in Italy, UAE, Brazil and Russia.