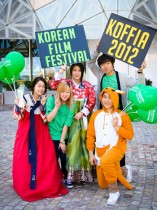 The 4th Korean Film Festival in Australia (KOFFIA) will embrace the best of modern Korean cinema, along with with cultural performances, gala sessions, industry forums and a festival atmosphere spread across three cities - Brisbane, Sydney, Melbourne this year. This year’s festival slogan, The many faces of Korean cinema brings to light the talented filmmakers, actors and actresses who make up the exciting new wave of Korean cinema, as the festival aims to bridge the connection between Korea and Australia. Running from Aug 14 – Sep 11, KOFFIA 2013 will see 50 screenings take place across Brisbane, Sydney and Melbourne. The program includes Kim Ki-duk’s Venice Golden Lion winning Pieta, Kim Ji-hoon’s latest disaster flick The Tower, and some of the biggest Korean blockbusters in history The Thieves and A Werewolf Boy. A notion for diversity will be represented through documentaries, independent films and shorts, including the K-pop doco 9 Muses of Star Empire and Kim Dong-ho’s Jury.  In Sydney and Brisbane KOFFIA will held at the multiplexes of Event Cinemas! KOFFIA has grown leaps and bounds in its short history, with almost 10,000 people attending to date. In Melbourne KOFFIA will take place at ACMI Cinemas, Australian Centre for the Moving Image in Federation Square, a longtime festival partner. Click here for Schedules, Tickets and more...