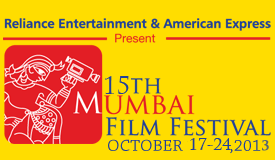 The 15th edition of the Mumbai film festival presented by Reliance Entertainment and organized by the Mumbai Academy of Moving Image (MAMI) will be held from 17-24 October 2013 at Liberty Cinema, Metro Big Cinema, Marine Lines as the main festival venues and Cinemax, Versova as the satellite venue. The 15th Mumbai film festival's impressive line up of 200 movies and other highlights were revealed earlier this week at the curtain raiser press conference held at the Taj Mahal hotel in the presence of Mr. Shyam Benegal, Filmmaker and Chairman, MAMI, Mr. Amit Khanna, Mr. Sudhir Mishra, and Mr. Ramesh Sippy, Trustees, MAMI, Mr. Srinivasan Narayanan, Director, Mumbai Film Festival along with various dignitaries from the Indian Entertainment industry. This year too the festival has announced new initiatives as part of the Mumbai Film Mart (Filmy Room and India Project Room) and a brand new Experimental film section to the festival. These new initiatives will be in addition to the other competition sections such as the 'International Competition', 'Celebrate Age' and 'Dimensions Mumbai'. The total prize money at this year's festival is USD 220,000. The 15th Mumbai film festival will also host a celebration of Spanish Cinema organized in tandem with the Embassy of Spain in India. This celebration package will also include classics such as El Verdugo, Seven Days in January, Carmen amongst others. In addition to this a special Spotlight on Cambodian films will be presented, while also continuing to showcase the blossoming film movement in Afghanistan with the Kabul Fresh section for the second year in succession. The festival will homage to Yash Chopra, Rituparno Ghosh and Pran. Furthermore the best of contemporary French cinema will be presented as part of 'Rendez-vous with French Cinema' section in association with the Embassy of France in India and Unifrance. Side bar events at this year's festival include master classes by acclaimed director Bruce Beresford, noted Editor Jill Billcock, a special Q & A with Leos Carax and Asghar Farhadi in addition to other planned activities. Noted German critic Daniel Kothenschulte will groom the collegians selected for 'Mumbai Young Critics'. Additionally a Music Composer lab has been set up and will be run by acclaimed composer Ilan Eshkeri of films such as Stardust, Johnny English, Ninja Assassin and Hannibal rising amongst others. The Screenwriters lab will be conducted by Equinoxe with the attendance of Claire Dobbin, Script consultant and Chair of the Melbourne International Film Festival and James v. Hart scriptwriter of films such as "Hook" and "Bram Stoker's Dracula" directed by Francis Ford Coppola. This year's 'International Competition' Jury will be presided by acclaimed director Bruce Beresford, of academy award winning film "Driving Miss Daisy" fame. He will be assisted by eminent film personalities including the French actress Nathalie Baye who has worked with pillars of the French Nouvelle Vague such as Francois Truffaut and Jean-Luc Goddard, Japanese film-maker Masato Harada who has made over 19 films in a 25 year career, the versatile actress Konkona Sen Sharma and award-winning director Deepa Mehta renowned for her path-breaking films Fire, Water and recently adapted Midnight's children. 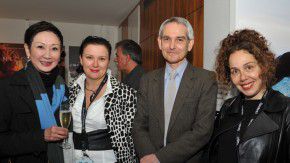