The past decade has seen the Jaipur Literature Festival grow into the world´s largest free event of its kind. Having hosted 1300 speakers and welcoming nearly 1.2 million book lovers, the success of JLF has been astonishing and heartwarming. Come celebrate ten years of JLF from 19-23 January, 2017. Take a look at the list of Speakers at JLF 2017

Do you have a story you want to tell the world?

At Jaipur BookMark we are offering limited seats at the The First-Book Club | New Writers Mentorship Programme in January 2017. Come share a synopsis with our panel of literary agents, critics and mentors. And should your entry be shortlisted, we will invite you to attend a special one-on-one session at Jaipur BookMark 2017 for advice from industry experts. If they are impressed by your work, you may even sign a book deal! BE QUICK - deadline for submissions to join the programme close on 20 December (The programme is open only to unpublished writers of Indian nationality).

Where South Asia Meets the World

Two years ago, the Jaipur Literature Festival began an important new initiative: Jaipur BookMark (JBM). Conceptualized as a B2B segment, JBM is held parallel to the main festival and provides a platform for publishers, literary agents, translation agencies and writers to meet, talk business deals, listen to speakers from across the world and perhaps even sign the occasional contract. This year’s event attracted delegations from the US, UK, Australia, New Zealand, Israel, France, Norway as well as as key Indian language publishers.

Registration for JLF 2017 Festival is free 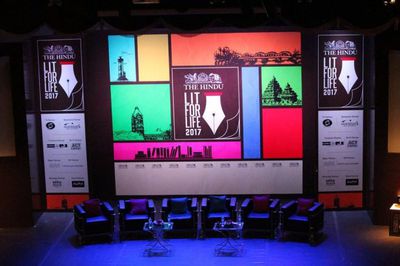