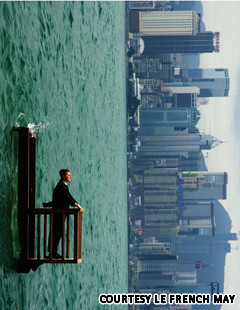 [caption id="attachment_8917" align="alignright" width="240" caption="Philippe Ramette performed "Le Balcon II" 10 years ago by floating down Victoria Harbour while clinging onto a wooden balcony."][/caption] Hong Kong’s 19th annual French arts festival, Le French May, presents a 10-week programme of performance, exhibitions and screenings. Organised by the Consulate General of France in Hong Kong and Macau, the programme includes more than 100 events. The festival, which began as a modest month-long event, is now the largest of its kind in Asia. It may be a little taste of home for Hong Kong’s rapidly expanding French community -- 13,000 French citizens live here, with that number growing at 10 percent per annum or 150 people per month -- but the new French Consul General, Arnaud Barthélémy, insists that the festival benefits the local community as well. He points out that the majority of Le French May’s 60,000 spectators are Hong Kongers, adding that most of this year’s performances involve a mix of French and local artists. “It’s French, but it’s more and more a Hong Kong festival,” he says. Organizers this year have increased their focus on contemporary visual arts and performances from a new generation of French talent, in a move that could help to attract younger audiences. “It’s always a challenge to create a program that is demanding but that can be seen by the largest possible number of people,” explains Barthelemy, adding that it is important for the program to show the most recent talent to emerge from France. Read more about Le French May festival. ——————————————————————————– This news item came via ifa (Thanks!) ——————————————————————————-