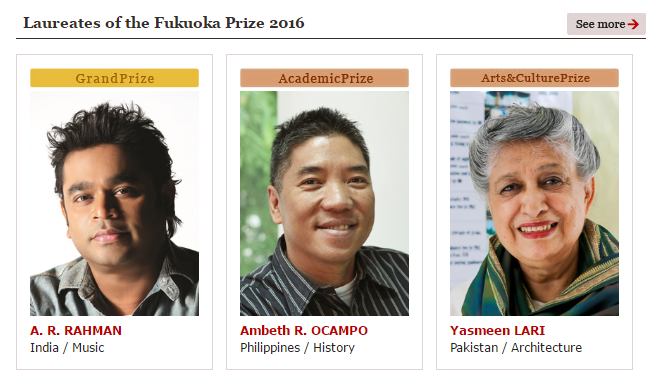 The laureates of the Fukuoka Prize 2016 have been announced in Fukuoka city, Japan, awarding those who have made outstanding contributions to academia, arts, and culture in Asia. Grand Prize goes to musician and composer A.R. Rahman (India) with the Arts and Culture Prize to the Pakistan architect and heritage conservationist Yasmine Lari and the Academic Prize to the Philippines historian Ambeth R. Ocampo.

The Fukuoka Prize is a means of showing respect to those who have made outstanding contributions to academia, arts, and culture in Asia. We intend, together with the people of Fukuoka, to advertise to the world through our city, the diversity and the distinctiveness of Asian culture.

The laureates for the fiscal year 2016 are as follows :

By his world-famous music, Mr. A. R. Rahman has opened up a new arena for film music, and has become a driving-force of this field to gain it a new recognition. His bold fusion of traditional South Asian, classical Western and popular contemporary American hip-hop and other music has created a number of unforgettable tunes with pleasing melodies and a powerful beat. They have become synonymous with the films for which he wrote them, and resonate in many hearts.

Ms. Yasmeen Lari founded the Heritage Foundation of Pakistan and has been involved in the preservation and conservation of historical buildings, while also designing contemporary architectural projects as the country’s first woman architect. Since the Great Earthquake in 2005, she has also been energetically working for humanitarian aid. As a pioneering leader in Pakistan’s society and culture, her contribution to cultural heritage preservation and to the development of a disaster-resistant society has been enormous.

Ms. Yasmeen Lari is Pakistan’s first female architect, and has not only created many contemporary buildings, but has also played a decisive role in the preservation and conservation of historical buildings, through the Heritage Foundation of Pakistan, which she herself founded. The support programme which she organized for the victims of the Great Earthquake in Pakistan in 2005 also exemplifies her engagement in humanitarian projects. Her work as a pioneering female leader of Pakistan’s progressive social and cultural movement has been crucially important to protect the historical heritage and to create a disaster-resistant society.

Dr. Ambeth R. Ocampo is an outstanding historian and an intellectual who has contributed to academic, cultural and social progress in the Philippines, through his positions as an academic and a newspaper columnist, and through his service in executive and advisory roles in historical and cultural administration. By providing a clear explanation of the global context within which Philippine history has developed, he has played an important role in promoting an open-minded nationalism and international exchange.

The 27th Fukuoka Prize award ceremony will be held at ACROS Fukuoka in 16 September 2016. Admission is free. We hope you will join us there.