[Exhibition] Gold from Java - Silver from Batavia, The Hauge 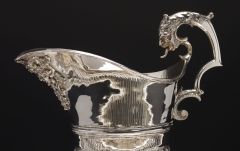 An exhibition at the Gemeentemuseum, The Hague, is presently showcasing for the first time, the beautiful gold Javanese jewellery of the pre-colonial Javanese courts in contrast to silver objects made for 17th and 18th century functionaries of the Dutch East India Company (VOC). The legendary Indonesia of the past comes to brilliant life in the sumptuous gold jewellery of the pre-colonial Javanese court culture (0-1500 AD) on show this summer, for the first time ever, at the Gemeentemuseum Den Haag. The mystical power of gold was used in this jewellery to attract good luck and protect the wearer against the forces of evil. The Gemeentemuseum is simultaneously exhibiting unique silver objects made in Batavia in the 17th and 18th centuries for functionaries of the Dutch East India Company (VOC). The objects include tableware, betel boxes and commemorative salvers. In 2010 the Gemeentemuseum received a donation of twenty pieces of VOC silver from the collection of architect C.J. Wagenaar. That donation prompted this exhibition and the publication of a new book on the subject. Following the Dutch conquest of Jakarta in the 17th century, more and more Dutch citizens settled in Indonesia. The colony’s increasing prosperity brought a growing demand for luxury items and household accessories. European silversmiths set up businesses in Batavia (now Jakarta) to meet this demand. In their workshops, they frequently employed indigenous workers or immigrant silversmiths from Ceylon (now Sri Lanka) and India, where there was a rich tradition of fine craftsmanship in silver. A key characteristic of Batavian silver is the resulting combination of western forms and oriental motifs or, vice versa, of objects rooted in the culture of the East but bearing western-style decoration. Betel boxes made for western residents of Batavia are a good example of the latter combination. They are intimately associated with the indigenous habit of betel-chewing, which was widely adopted by the Dutch community. The boxes are beautifully decorated tortoiseshell or tropical hardwood caskets adorned with silver fittings. Since the use of such boxes usually changed over time, their interiors have usually been modified. Remarkably, however, the original compartmented interiors of some of the boxes in this exhibition are still intact. Commemorative salvers are among the most typical kinds of objects produced by silversmiths in Batavia. Such salvers, engraved with inscriptions in memory of the deceased, were given to friends and relatives. The more salvers were distributed, the more wealthy and important the deceased appeared. One surviving salver, inscribed in memory of Cornelis Chastelein, has a particularly interesting tale to tell. Chastelein was a notably enlightened man for his time: he arranged that, after he died (in 1714), his slaves should be freed and given his estates. Some centuries earlier, in the pre-colonial era, gold jewellery played an important role in Javanese court culture. The Gemeentemuseum Den Haag possesses a fine collection of such jewellery, adorned with monsters, demons and other aggressive heads intended to attract good luck and protect the wearer against the forces of evil. Apart from such terrifying motifs, many of the pieces also feature decorative devices deriving from the natural world. This suggests that, prior to the Hindu-Buddhist period, the Javanese may have worn jewellery made from parts of indigenous plants and animals. The exhibition is accompanied by two bilingual Dutch/English publications: Goud uit Java / Gold from Java by Pauline Lunsingh Scheurleer (WBooks, € 24.95) and Zilver uit Batavia / Silver from Batavia by Titus M. Eliëns (WBooks, € 27.95).