Erich is an interdisciplinary Master of Creative Industries student at Popakademie Baden-Württemberg (GER) and Queensland University of Technology (AUS).

In recent years many developing countries have recognized the challenge of embracing creativity in the arts and innovation in business. The case of Indonesia is significant, firstly because the nation is a young democracy, and secondly because the central government is taking an active development role. Like many other countries in Asia, however, the term creative economy is hierarchically managed and aligned to economic improvements rather than furthering pluralism. In effect the government has taken the master template from the UK’s Department of Culture Media and Sport and adapted this to local conditions. Along with this cultural borrowing come high expectations.

In October 2011, an Indonesian cabinet reshuffle led to the establishment of the Ministry of Tourism and Creative Economy, headed up by former Minister of Trade Mari Pangestu. Minister Pangestu was in charge of aligning the development goals of the tourism industry with those of the creative industries. However, the newly elected president Joko Widodo subsequently changed the name of the back to Ministry of Tourism, omitting the term creative economy. Mari Pangestu was then replaced by Arief Yahya, the former CEO of Indonesia Telecommunication Company, the company behind a large development project called Bandung Digital Valley.

The main task of the former Ministry of Tourism and Creative Economy was to attract international visitors to Indonesia’s cultural heritage, represented primarily by culinary businesses, domestic fashion and indigenous craft. The government’s focus on tourism is diversification of the economy. Spending by foreign tourists has not only flowed into creative products and services but to provinces for regional development.

While the creative economy idea has not been dispensed with it is currently unclear how it will be reframed. Suggestions are that a separate agency will be formed although some believe that the creative economy is too big an idea for an agency to manage. The former hybrid Ministry (of Tourism and Creative Economy) managed two industries that mutually contribute 12% to GDP and deploy a workforce of 16.9 million inhabitants out of a total labour force of 119 million. 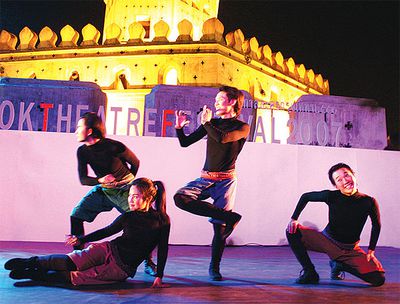 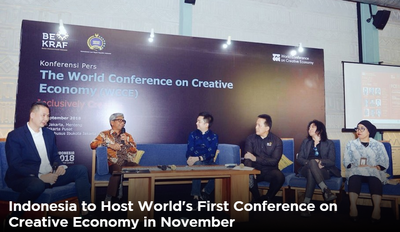