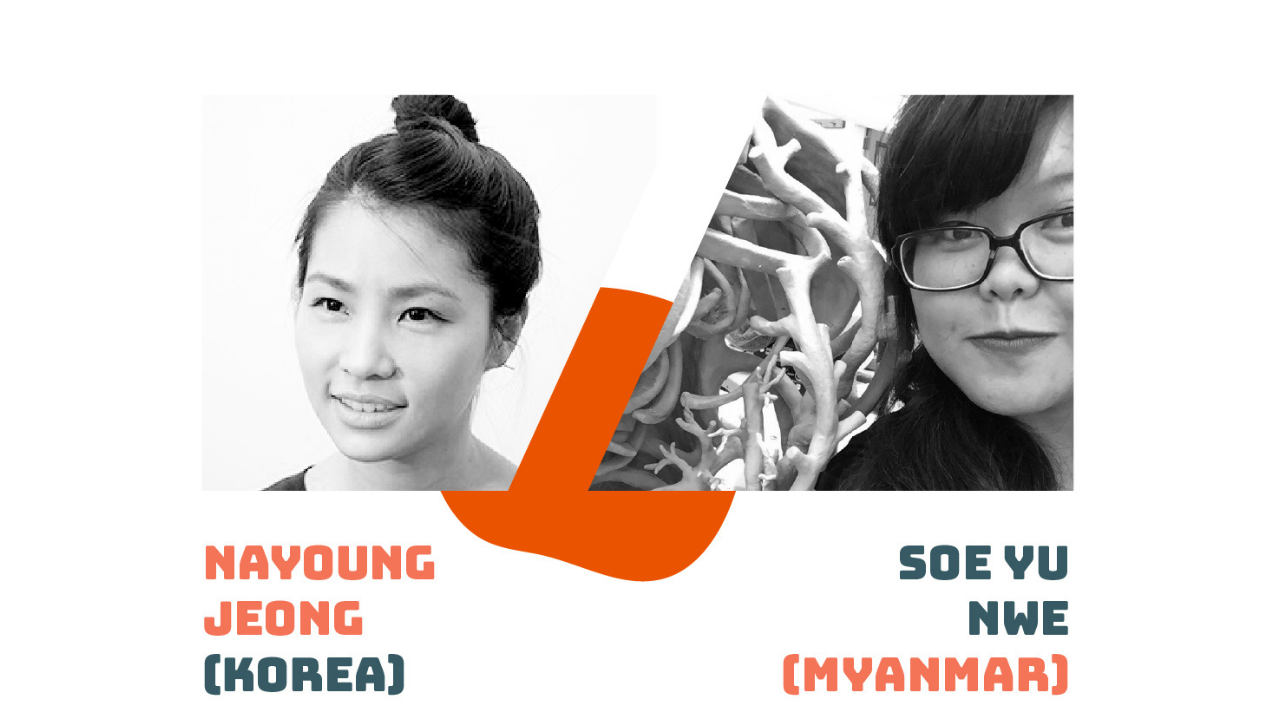 Soe Yu NWE from Myanmar and Nayoung JEONG from Korea collaborated through Virtual360 Konnect – Emerging Arts Leaders Virtual Residency Series. The pair worked on ‘Bounded Women’, an exploration of the metaphorical borders of womanhood by interrogating the issue of confinement in relation to the female identity in their respective countries though art and conversations.

Our artistic exploration into the cultural confinement of women begins with the body politic, which creates restrictive gender roles for women. Various religions around the world observe these restrictions which can be found across Western and Asian contexts. While there is comparatively more freedom for women now, these social, religious, and political pressures persist. While many things have changed for the better, there remains vestiges of sexism today that are unchanged from the past. For example, unlike women who wore only skirts as a school uniform in the past, women nowadays are encouraged to wear pants as part of a school uniform to prevent sexual harassment which still occurs.

In Myanmar, the Buddhist concept of “hpone” had resulted in a cultural phenomenon that makes women the second sex. “Hpone or pon” can be defined as spiritual glory, power, influence, and dominion. In Myanmar, men are believed to be spiritually superior to women because they are intrinsically higher hpone creatures. As George Orwell wrote in ‘Burmese Days’ of his character U Po Kyin’s anticipation that his religious meritorious deeds would grant him a reborn in a male’s body, Orwell commented sharply that “a woman ranks at about the same level as a rat or a frog- or at worst as some dignified beast such as an elephant.”

Another example would be a widely accepted Burmese folk belief that when a man passes under a woman’s longyi (traditional Burmese female skirt), the hpone of his lifetime would be reduced. Such sexist concepts create a social hierarchy in the everyday interaction between sexes and also reduces a woman’s gender to something that tarnishes a man’s spiritual dominion. 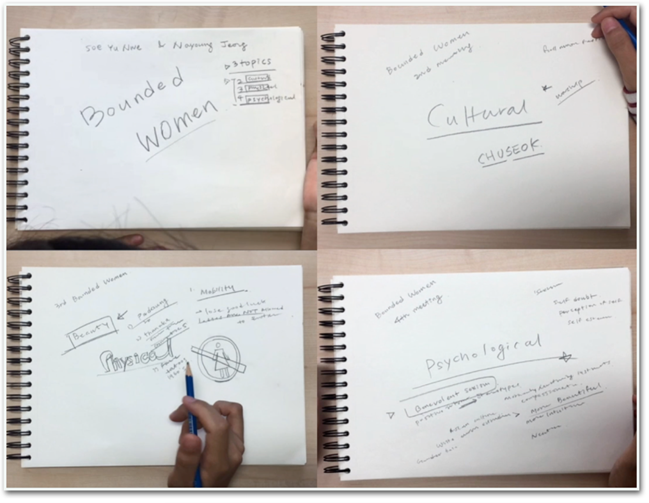 In Korea, women respond to physical standards intended to mold them into sexual objects for the benefit of the male gaze. There are nearly 1 million cosmetic surgeries, also known as Artificial Plastic Beauty procedures, per year. Jeong made a video titled ‘Became a Princess’ which explored the physicality of womanhood as an external force dictated by larger social forces. 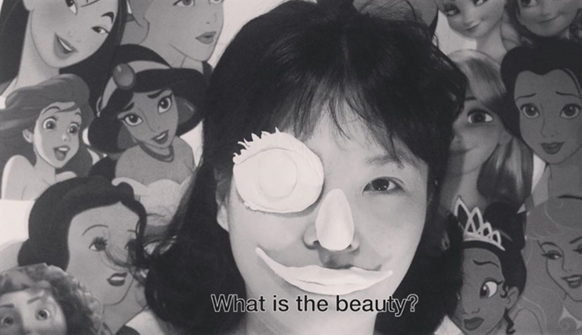 On the topic of gender-based physical parameters in Myanmar, Nwe shared that women are restricted to enter the inner sanctum of the pagoda and are prohibited to be in close proximity to the Buddha Statue in temples. Signs that say “No Ladies Allowed” in English are frequently observed on numerous pagoda grounds to ward oﬀ female tourists. One such place Nwe has visited is Mandalay’s Mahamuni Buddha Temple, where only men and monks are allowed to gild the magnificent Budda statue. Another example is the famous Kyaiktiyo Pagoda where the ground surrounding the sacred boulder is sectioned oﬀ with clear warning signs to prevent women from entering. According to a myth in ancient times, the sacred boulder with Buddha’s hair relic was afloat at the edge of the cliﬀ due to its spiritual power. However, a woman’s touch had resulted in the boulder to lose hpone, and thus it had descended to the ground. Adding to the examples in Myanmar, women are also warned not to enter any sacred religious grounds when they are menstruating. 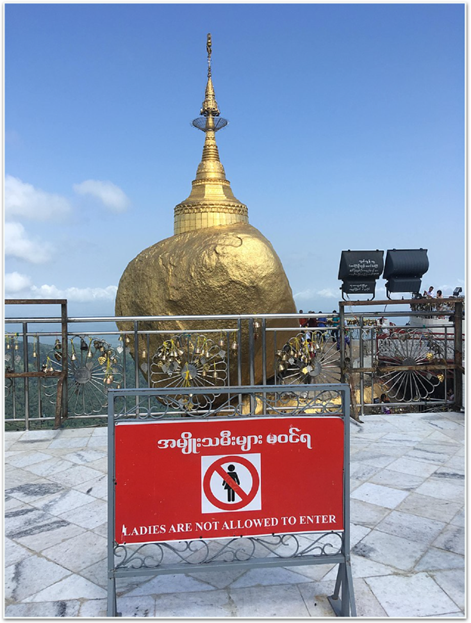 One of the drawings Nwe created during the Virtual360 Konnect residency responded to the idea of female sex as an impure body part. In the drawing, a hybridised botanical woman ghost is wrapped and bound by a serpent which serves as a phallic symbol, while the dark rose she held is symbolic of the tainted female sex. 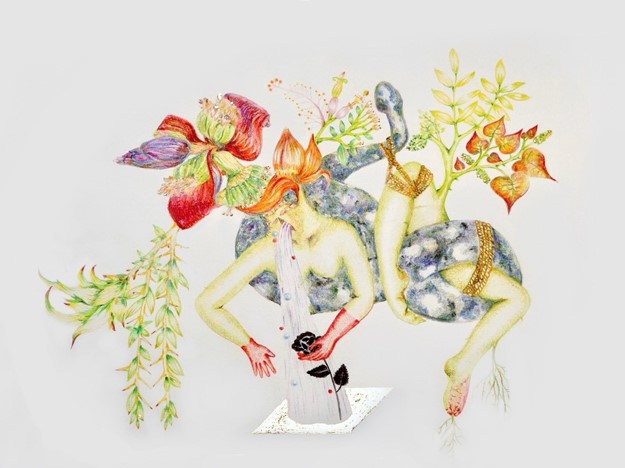 The psychology of female confinement extends to the interior realm of the individual psyche as well. This can come to pass as what is known as Benevolent Sexism. This phenomenon expresses itself as a form of brainwashing and infantilisation through social conditioning. Namely we see this formulated in the idea of women always needing help from men, which produces a reliance and co-dependence. Benevolent Sexism may also transpire in the idea that women are of superior physical beauty and must therefore be idolised. While this can seem like a positive aspect of womanhood it still results in a sense of dependence on men for validation. Add to this the social pressure of childbirth and domestic obligations, women may feel a psychological confinement that produces social and physical tensions.

This notion of psychological confinement also seeps into the spiritual life of women. In a major Buddhist country like Myanmar, the idea of attaining enlightenment during the reincarnation cycle can be a religious person’s ultimate life goal. Yet girls are taught at a young age that they cannot attain enlightenment in their own body. They must be reborn as a man to gain enlightenment. This notion of the female body deterring a woman from achieving a sacred goal is a deeply wounding concept to her psyche and could also develop a sense of inferiority in a woman.

After reflecting on the concept of societal confinement of women through creating artwork and weekly discussions, we were left to wonder how one would reconcile the value diﬀerence within one’s sexist custom and religion. To what extent does such sexism aﬀect a woman’s daily environment and their relationship with close ones and how can these be reconciled. We also wonder if the economic damage and public health risk caused by the COVID-19 pandemic has intensified the pre-existing sexism due to the inescapable physical confinement of home quarantine. We wonder how much of the imbalance power dynamic causes domestic abuse and makes women the most vulnerable victim under the false sense of security of their own home. Doubtlessly, the virtual residency left us with more questions regarding the physical and psychological borders within which a woman establishes her life and what it takes in order to diﬀuse and transgress sexist societal boundaries.

Myanmar artist Soe Yu Nwe's cross-cultural experience has inspired her to reflect upon identity through making. She creates hybridised beings that are fluid, fragile and fragmented. Through transfiguration of emotional landscape by poetically depicting nature and body in parts, she ponders the complexities of individual identity in our rapidly changing globalized societies. Having exhibited in 13 countries in the span of 4 years, she was named in Forbes 30 Under 30, Art & Style List of 2019. Her work has been acquired by the Queensland Art Gallery & Gallery of Modern Art in Brisbane, Australia.

Korean artist Nayoung Jeong’s primary material is clay that she sources locally from various cities around the globe to explore issues of cultural displacement. Her work often takes the form of invitational sculptures that are constructed with these local material, welcoming public audiences to consider their own placement within territorial, nationalistic, and cultural schemes. JEONG often infuses live performance and ritualistic action into her exhibitions, engaging audiences through use of space, material, and human physicality. She received her BFA from California College of the Arts, and MFA at Rhode Island School of Design. She recently received PhD at Slade School of Fine Art, University College London.