Magazine > The Restoration of an Indonesian classic, Lewat Djam Malam

The Restoration of an Indonesian classic, Lewat Djam Malam

Usmar Ismail's Lewat Djam Malam (After the Curfew) is a classic 1954 Indonesian film set in the aftermath of the revolution that brought an end to the Dutch colonial rule. While obscure to most people unfamiliar with the history of Indonesian cinema, to many Indonesian film aficionados, it is regarded as one of the best—if not the best—Indonesian films. In May 2012, after a long and arduous restoration project, it was screened at the opening of Cannes Classic.

Yet, a couple of years ago, the remaining reels of  Lewat Djam Malam were threatened into degeneration inside the vault of Sinematek Indonesia.

It is a condition shared by almost 3,000 other Indonesian film titles kept inside the non-profit film archive, where tropical, hot and humid environment quickly ruins delicate material. At least once a year some newspaper or magazine bemoans the dismal condition of Sinematek Indonesia. According to Lisabona Rahman, the manager of the Kineforum Program, who is currently taking her Master’s degree in film preservation in Amsterdam, not more than 10% of these titles were in an acceptable condition. 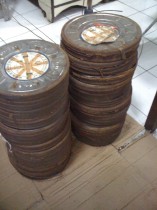 In Lewat Djam Malam Diselamatkan, the accompanying book released to document and to disseminate the restoration process and related issues, JB Kristanto stated that the ambitious project was initiated in 2008, when Philip Cheah, the director of Singapore International Film Festival, e-mailed JB Kristanto and Lisabona Rahman (both the authors of the Indonesian Film Catalogue 2008), for the possibility of translating and publishing the Indonesian Film Catalogue into English. The next e-mail in January 2010, not only talked about the translation of the book and the website, but also offered having a special screening of one restored Indonesian classic film with English subtitles.

Lewat Djam Malam was almost immediately recommended as the title, considering it was also one of the masterpieces of Usmar Ismail, known as the Father of Indonesian cinema.

Thus began the long ambitious project of restoring Lewat Djam Malam. Rahman began researching the technical and physical conditions of the reels so that the National Museum of Singapore could estimate the budget needed for this project.

The restoration was conducted by L’Immagine Ritrovata a laboratory specialising in film restoration, in Bologna, Italy. According to Davide Pozzi, the director of L’Immagine Ritrovata, while the handling of every film is different, the restoration of Lewat Djam Malam was considerably more arduous than their usual restoration projects, taking 7.5 months of work without a day off, since none of the six copies available was fully intact. Automatic transfers were impossible since they were infested with moulds and fungus, suffered from vinegar syndrome, creased, curled and torn, and many other damages. Once the film proceeded to be digitally repaired, other materials such as other films by Usmar Ismail, and films belonging from the same period, were sent as references. There was also a two-minute session of sound missing in reel five, which had to be recovered from a positive copy found inside the vault.

The final products were not only in celluloid but also a DCP (digital cinema package) at 2k definition, suitable for most projectors operating in Southeast Asia. The total cost of the restoration was around SGD 200,000 (around USD 163,706, or almost IDR 1.5 billion).

This is the first full restoration project of an Indonesian film. It was initiated under the mission of restoring the shared heritage of the Southeast Asian cinemas, originally to be fully funded by the National Museum of Singapore. Agreements were signed between the National Museum of Singapore and Irwan Usmar Ismail, as the representative of Usmar Ismail family and the copyright holder of Lewat Djam Malam.

According to Adrian Pasaribu, the co-editor of Lewat Djam Malam Diselamatkan, the international world seemed to respond positively. Since the history of Southeast Asian cinema is relatively underexposed, most people—commonly only familiar with the region’s 80s to 90s exploitation films—were surprised to see that, already in the 1950s, Indonesia was making a film with such artistic and thematic complexity. Lewat Djam Malam is already scheduled for the next screening in the upcoming London Film Festival by the British Film Institute in October 2012, as part of the Treasure from the Archive program.

In Indonesia itself, with theatres screening The Amazing Spiderman and The Dark Knight Rises at the same time, there was unfortunately not much room—or promotional budget—for Lewat Djam Malam to grab moviegoers’ attention. But those who managed to watch it were surprised, to see the past vividly portrayed, and to know that Indonesia had produced a film with this level of sophistication in the past. The screening schedule was extended for three weeks in Plasa Senayan, Jakarta, and two weeks in Yogyakarta.

Beyond theatres, the film had been screened on KompasTV during the Indonesian Independence Day on August 17, 2012. A DVD release is forthcoming, as well as road shows to different cities (particularly outside Java) to stimulate richer conversations. A new initiative called Sahabat Sinematek (Friends of the Sinematek) is being organised, with the hope of raising awareness and supporting various film preservation plans.

Beyond theatres and film festivals, it is essential to move this work forward. The immense works involved require extensive research and strategic planning, pooling resources and professional expertise from myriad sources. Local and global forums coupled with informal collegial discussions remain invaluable resources to further disseminate, build upon, and expand the dialogues. This restoration has not only brought about a film of special historical and aesthetic values, but also awareness of the importance of a local film archive, and the necessity of transnational partnerships and networks among various individuals and institutions.

The author would like to thank Adrian Jonathan Pasaribu, Hikmat Darmawan, and Pak Budi (Sinematek Indonesia) for their kind comments and help.

Kathleen Azali is the founder and director of C2O Library & Collabtive, an independent library and collaborative lab in Surabaya, Indonesia, that aims to engage and to collaborate with various individuals, organizations, and networks in building open, critical, and empowered individuals and communities. C2O runs an active library, and has several programs including printed newsletter, website, book launches, workshops, film screenings, and public talks. 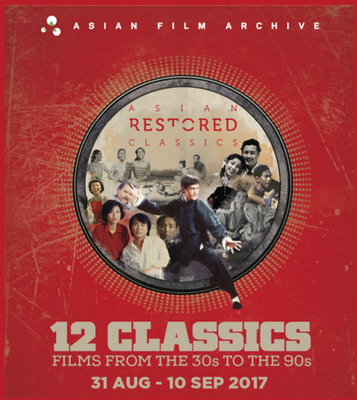