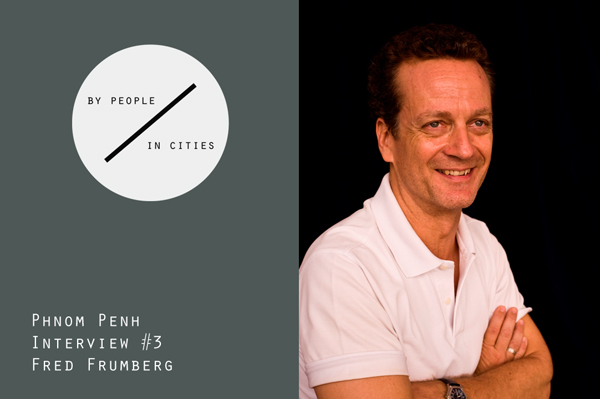 The third interview for By People / In Cities: Phnom Penh invites Fred Frumberg, Founder and Executive Director of Amrita Performing Arts, a non-profit organisation working to preserve and revive Cambodian performing arts. He shares his thoughts about the future possibilities for Cambodian arts and his experience in integrating contemporary elements into Cambodian performing arts through international collaborations.

Q: If you had to pick one word to describe Phnom Penh, what would it be?

Q: There is a growing relationship between cultural heritage and new creative practices in Cambodia, how does Amrita experience and live this new artistic climate?

Our mission at Amrita has been to help revive and preserve the wide spectrum of Cambodia’s traditional performing arts through a programme that emphasised national capacity building in all aspects of production management.

As a reflection of observed shifts in the country’s artistic climate, the mission has evolved to focus more on contemporary creativity in theatre and dance. Amrita Performing Arts produces fully staged productions of contemporary Cambodian dance and theatre in collaboration with internationally renowned directors and choreographers, featuring professional Cambodian performers through a process of intensive workshop and dialogue.

In its current phase of development, Amrita Performing Arts has become a major catalyst in helping these young artists find their voice and move their creative drives forward in a proactive, nurturing and culturally sensitive environment.

As the Cambodian artists reveal greater technical ability with a passionate artistic zeal, we continued to lower the ‘safety’ net by introducing into the process collaborators from further afield. Highly successful workshops have led to the creation of new and exciting repertory with such artists as Belgium based choreographer Arco Renz, Indonesian choreographer Eko Supriyanto, Khmer / French choreographer Emmanuèle Phuon and Toronto based choreographer Peter Chin to name a few. These works have played to an eager and curious Cambodian audience as well to extremely receptive audiences on international stages around the world.

Amrita Performing Arts is now well established in Cambodia as a pioneer in Cambodian contemporary dance, responding to the creative drives and desires of our performers who in turn are responding to a vastly different Cambodia.  Our hope through these collaborations has been to translate the experience of current social conditions into the dance parameters of time, space and physical energy; exploring the themes of emergence from isolation towards integration within the complexities of the contemporary world and in the context of a transformed country. Our work continues to examine the relationship between tradition and the contemporary, set against the backdrop of the past and the current social milieu.

Q: What would help improve the situation for artists and arts organizations in Phnom Penh?

More support from the government for non-tangible culture as well as a stronger sense of responsibility on the part of well off Cambodians who are in a situation to help develop the arts community.  Nearly the entire burden now falls international NGO’s and that needs to shift.

Q: Do the arts and culture have the capacity to bring social change in Phnom Penh? And are they accessible enough for local people?

We have produced numerous plays on social issues including HIV awareness, domestic violence which included extensive outreach programmes.  We also produced two play about the Khmer Rouge; 3 Years, 8 Months, 20 Days and Breaking the Silence. The latter played throughout the Cambodian provinces with audience discussions that were so successful, the play was invited to tour to five cities in Rwanda last month to help teach local artists to use theatre for purposes of national reconciliation.

Q: How do you envision the future for young artists in Phnom Penh?

Very hopeful otherwise what would be the point of our efforts. As we’ve observed the voracious appetite of the artists, we recently changed our mission statement to read:  Amrita Performing Arts is committed to creating contemporary Cambodian dance and theatre for a new generation of artists passionately dedicated to ushering their country's ancient performing arts heritage into the future.


Fred Frumberg moved to Cambodia in June '97 as a consultant with UNESCO, to assist in the revival and preservation of Cambodian traditional and contemporary performing arts. In July 2003 Fred founded AMRITA Performing Arts, a non-profit organization based in Phnom Penh to continue these efforts and introduce an element of contemporary creativity.  Prior to Cambodia, Fred spent fifteen years working in opera houses and theaters throughout the USA and Europe, assisting stage directors such as Peter Sellers, Francesca Zambello and Deborah Warner.  He was Head of Production at the Paris Opera from 1994-1997, a staff stage director for the Netherlands Opera in the late 1980’s and production manager for two World Festivals of Sacred Music in Los Angeles in 1999 and 2002.

The second series introduces Phnom Penh, Cambodia, through its cultural heritage and the recent transformations that have been taking place at the intersection of traditional and contemporary practices. 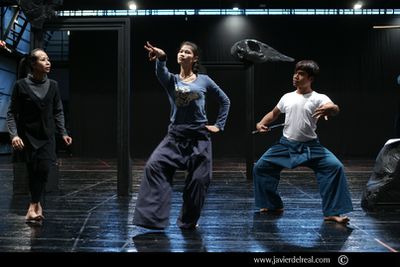 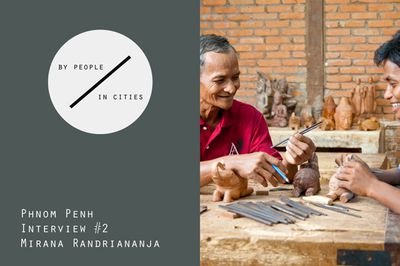