Magazine > Korea | An introduction to Cultural Policy - Part I

In this article, the first of a two-part series, Kiwon Hong sets the historical context of cultural policy development from the 7th century CE to the 1980s.

The political thinking about the arts may been seen to originate during the 7th-8th century (under the unified Shilla dynasty) from the Confucian order and its role in maintaining the state. Music, art, and state ritual were regarded as useful instruments in cultivating and refining human nature to incarnate the Confucian ideal. The state was conferred with the important role of setting theoretical standards in various art forms, especially for those used in courts and governmental ceremonies. However, Confucianism was not prevalent in the everyday life of common classes. The cultural life of ordinary people was a blend of various religions such as Buddhism, Taoism and folklore practices. Confucianism was reinforced only in the late 14th century with the establishment of the Chosun dynasty, when political doctrine and everyday norm had come to a concordance. The state yielded influence on cultural production and consumption by managing royal institutions in the arts.

The invention of Han-Geul (한글: Korean alphabet) may represent the centralised and state-oriented attitude in cultural undertaking. Han-Geul was invented during the reign of King Sejong (1397-1450). King Sejong, a revolutionary monarch dedicated to the establishment of national identity and a knowledge-based society, founded a form of special institution solely devoted to academic research and the creation of new alphabet (Jip-Hyeon-Jeon). While the Chinese script was used by the learned class, it was hard to learn for the common people. It also did not coincide well with the spoken language. As a result of strenuous effort, a new phonetic alphabet system was finally created in 1446 (proclaimed by publishing Hoon Min Jeong Eum: Righteous sound to enlighten the people). The written language was an effective medium to convey inherited wisdom and ethical norms that could not only develop knowledge, but also sustain the solidarity of the society. It is also noteworthy that literary art flourished as the language system evolved with time. 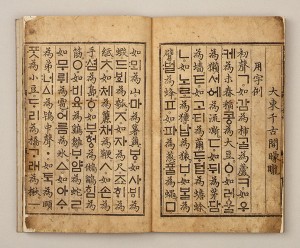 The Japanese colonial period (1910-1945) acts as a great divide in terms of the cultural sector. Historical facts were distorted, traditional cultural practices and conventions debased, and heritage sites and monuments were disrupted to serve its interest. Use of the Korean language was banned and policy to convert surnames to Japanese was reinforced. All in all, there was no room for proper cultural policy discourse in this antagonistic situation.

Political turmoil after the Second World War (1939-45) and the Korean War (1950-53) had an indirect impact on the formation of modern cultural policy in South Korea.

The independence of the Korean Peninsula from Japan in 1945 was followed by the territorial division of the North and South. With this originated the subsequent ideological contention, also evident in the cultural sector. As communist doctrine towards art and culture were evident (state-control of style and content), so too was present an ideological drift in the other half of peninsula. There was no specifically pronounced cultural policy orientation, except for the ideological drift that any kind of activity that could be regarded as endangering democratic polity was to be curtailed.

Basic endeavours in terms of building infrastructure were undertaken, such as establishing a few national cultural facilities such as the National Library, the National Museum, the National Theater and the National Korean Traditional Music Institute.

1960s and 70s: An inception period of modern cultural policy

The decade from the 1960s to the 1970s could be regarded as a period of contradictory accomplishment in terms of cultural policy. Being a government that came into reign by coup d’états, it retained a two-fold attitude in dealing with cultural matters. The government put forth great effort to refurbish national cultural identity and to restore cultural heritage damaged during the colonial period. By conferring upon itself the role of safe guarder of national culture, the government tried to partly certify justification for its regime. The other side of preserving national culture was the oppression of culture that envisioned liberal, rebellious, and democratic thoughts.

Despite this flaw, this could be regarded as an inception period of modern cultural policy in South Korea. The first comprehensive legal provision to promote culture and the arts, namely the Law to promote Culture and the Arts (1972) was enacted in this period. The cultural sector was not managed independently, but covered multiple fields as to include public relations and information (Ministry of Public Information or the Ministry of Culture and Information). The cultural policy area was also one of the fields that had to coincide with the overall national policy agenda and it followed the national format of setting up intermediate plans such as ‘Five Year Culture Promotional Planning’. The ‘planning’ idea in arts and culture had the effect of diminishing the autonomous development in cultural sector.

The second round of military governance partly followed the policy direction of the former, but replenished the cultural welfare side of policy. Decades of despotic government and compact economic development had a twofold effect on Korean society. It could be referred to as a flourishing period in terms of expansion in cultural infrastructure. Local governments were financially supported by the central government to build new cultural facilities such as theaters, public libraries and museums. These efforts, however, did not produce a grand impact because they had not been paired with a nurturing of human capital, which gives life to these material objects. Local governments were unprepared in terms of programmatic orientation on how to run these facilities. This ‘Grands Travaux’ type of centrally-planned policy resulted in the monotonous design and function of art centers, which were indistinguishable from each other and lacked the unique characteristics of local cultural identity.

Economic affluence triggered interest in the cultural arena; however, there were limited alternatives in terms of artistic ideas and expressions. Failure to democratise the Korean political system in the 1980s brought about substantive oppression in freedom of thought and artistic expression. Confrontation with the communist North also aggravated the situation in the name of protecting national security. During this period, the opening of the cultural market to the United States and Japan was limited, as local arts and culture suffered from various regulations.

Kiwon Hong is Associate Professor at the Graduate School of Public Policy and Industry, Sookmyung Women’s University, South Korea.  She also serves as Director of the Cultural Policy and Administration Programme at the School.

Links and resources to information on Korean cultural policy

Read Part II of this article at: https://culture360.asef.org/magazine/korea-an-introduction-to-cultural-policy-part-ii/

Sejong Center for the Performing Arts