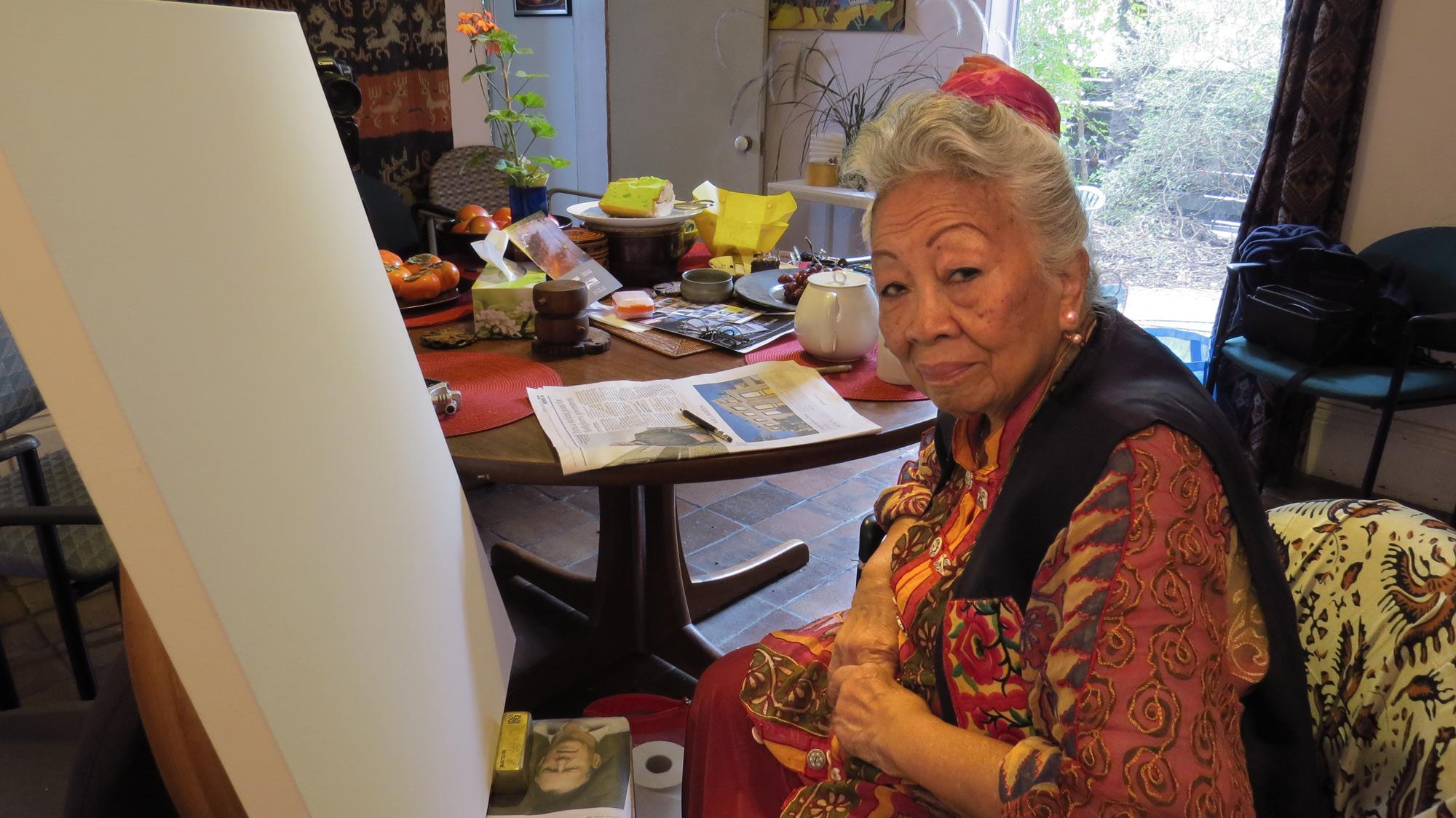 A new documentary film tells the story of visionary artist Kartika Affandi, daughter of Indonesia's most celebrated painter, and a groundbreaking personality in her own right.

On the poster for the documentary: “Kartika: 9 Ways of Seeing”, the smiley face of a blithe elderly woman pops up from an opened mouth, bringing to mind the screaming face of “The Court Of The Crimson King” cover album. The image is indeed an accurate anticipation of the quasi-lysergic realm we will be led into by watching the film. It is the colourful universe of a real artist queen, Kartika Affandi, whose artwork of a lifetime is irreverent, playful, loud, energetic and even shocking for Indonesian society.

The life and art of the Javanese painter and sculptor, born in 1934, is so extraordinary that it overshadows the fact she is the daughter of Indonesia most acclaimed painter, Affandi. Taught to paint by her father, she had to work hard to be acknowledged for her own personal language and poetics. Still actively painting, sculpting and exhibiting at the age of 83, she keeps on bring her artistic vision to life.

In the documentary “Kartika: 9 Ways of Seeing”, researcher and videomaker Christopher Basile lets Kartika recount her experience and art practice. We chatted with Basile - whose longstanding interest in SE Asian art has led him to devote 3 years to this project - to learn how Kartika Affandi found the strength to express herself in the face of a society and a time in which this was unprecedented and considered an impossible goal for a woman.

How did you first encounter the work of Kartika Affandi and what were your first impressions?

I first saw Kartika’s paintings years ago in reproduction. What I was impressed with was her consistent vision while portraying a wide range of subject matter. She imbues her work with a particularly personal quality and a special energy that is all her own. Later when I saw her works in person in Yogyakarta in Java I was amazed. As a filmmaker one of the challenges making the film was trying to bring that impact to the screen.

What pushed you to make the documentary? 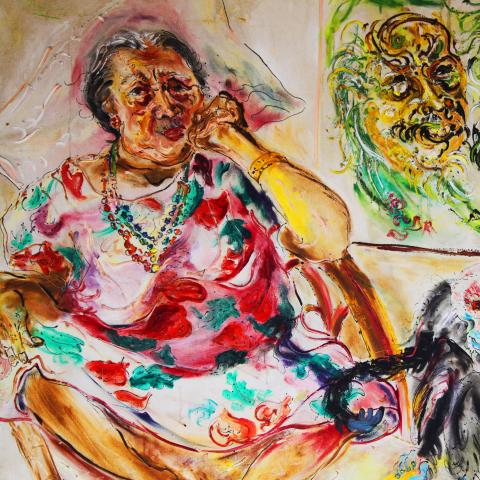 I felt more pulled than pushed. I was in Java for another film project, shooting a short documentary about a local mystic and guru, when I first met Kartika. This was about 9 years ago, and I was so attracted by her warmth, her intelligence, her story-telling. Her grand personality just pulled me in, and we hit it off.  She is a well-known public figure in Indonesia, as the artist-daughter of the country’s most celebrated artist Affandi, and as an outspoken feminist and humanist voice. This said, after 60 years of creating remarkable work she still hasn’t received the recognition she deserves. And nobody had ever made a film with her, so she seemed to me like an exciting subject for a documentary film.

Did you get any unexpected results from the process of doing the documentary that you couldn’t predict?

When I started the film, I was concerned about telling Kartika’s story to the wider world who might not know very much about Indonesia or modern art there. So, I envisioned a film describing Kartika’s life starting from the Dutch East Indies colonial period in the 1930s, through the Japanese occupation in WWII and after that the fight for Indonesian independence – which her father was involved in and which led to the family being interred in prison camps. There was so much to tell: her world travels with her father Affandi, her studies in India, her experiences performing as a dancer in Europe, her marriage at age 17 and having 8 children by age 27, life under the Soeharto regime in Indonesia starting in the 1960s...I shot something like 12 hours of interviews with Kartika, plus another 20-plus hours of her painting and living her life. The documentary was becoming a long essay instead of a film, and it would need to be 4-hours long.

So instead I edited it into a 1-hour film which is more of a character study, a personal, psychological portrait of a great personality and her vision. Kartika revealing herself gradually, obliquely, as people do in conversation in real life, as she talks about selected pieces in her oeuvre, how she made them and what they mean to her. Unexpectedly this somehow traditional approach to film documentary evolved into more of a visual poem about Kartika, her world and her art.

In your documentary Kartika is described as a modern Indonesian artist. What do you think makes her modern and not contemporary, in your view? 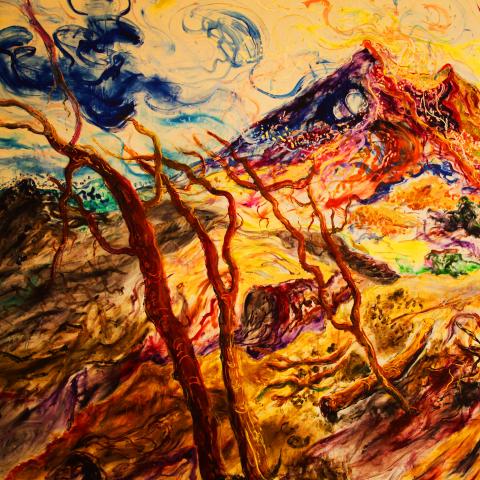 This came from Kartika herself, who describes herself as a modern artist in contradistinction to a “traditional artist” which in Java means someone who makes shadow puppets, keris daggers, batik paintings, carvings and other traditional Indonesian art forms. But I think Kartika could be described as a contemporary artist in many respects. Her decision to create her works in spontaneous, public settings in what she calls “performance art,” for example. She did a collaborative, performance-art piece in Delft in the Netherlands recently which involved her being kidnapped and secured in the boot of a small car that was hoisted up on a crane above the audience. She is not like most 83-year-old, great-grandmothers. I attended a party with her, a gathering of the hot, young graffiti artists in Yogyakarta, and they all loved her and treated her like a spiritual godmother. Kartika is complicated and multivalent; her work resists labels.

How do you think the shadow of her father’s work has affected her career? And how does she feel about that today?

In my film Kartika talks at length about the influence of her father Affandi, and her mother Maryati who was also an artist who worked in needlepoint and paint but entirely for her own pleasure. From the moment Affandi burst on the world art scene representing Indonesia for the nation’s first exhibition at the Venice Bienale in 1954, he was acknowledged as a genius. His influence on Kartika was and is paramount, even today 28 years after his passing. From Kartika’s first exhibition she was compared unfavourably to her father, and some have criticised her work for being too much like his. In my view, I think this is rather superficial, and I expect anyone looking at her work with open eyes would agree.

To develop her own style and artistic knowledge Kartika studied in Paris and later, in Vienna. Speaking to her, would you say Western ideas are part of her way of looking at art?

Kartika acknowledges influences from Western painting and sculpture, and from the arts of India, China, Japan and other Indonesian traditions. As a child she travelled on her father’s art expeditions to Bali and lived there, absorbing those influences. She has collaborated and learnt from local artists in Aboriginal Australia and Papua. So I think she has been influenced by Western art as well as others.

But Kartika remains first and foremost a Javanese artist. That is why I took some time in the film portraying her environment, beginning with showing urban scenes of Yogyakarta where Kartika has been based for most of her life, and her home and gallery just north of the city among the rice fields near the Merapi volcano where she lives.

What new aspects has Kartika introduced to Indonesian art and what is her legacy? 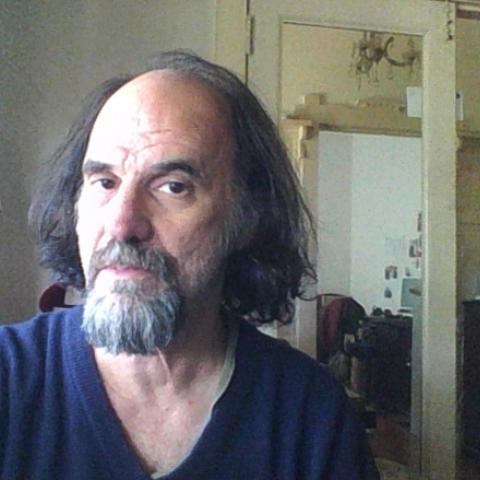 There are many things. Kartika brought an intimately personal perspective to the Indonesian art world, a deep subjectivity. In a culture where individuality and extremes of emotion are repressed, she expressed her most overwhelming fears and anxieties openly. In the repressive atmosphere of modern Indonesia, she brought an unashamed honesty to her nudes, without ever prettifying them or fetishizing the body. She presents nudity openly, as a simple fact of human life, something that is unprecedented in Indonesian art.

Kartika deserves credit for introducing a woman’s perspective to the world of Indonesian art. She opened the way for women in Indonesia to pursue careers as artists. There is a moment in the film Kartika: 9 Ways of Seeing where she describes how her father Affandi finally acknowledged, when she was in her mid-40s, that she had established her own distinctive, artistic identity. In the painting “Rebirth” she depicts herself from a first-person perspective as a nude giving birth to a wizened, newborn version of herself. When Affandi told her he could never have imagined such a subject for a painting, Kartika said that she could because “I am lucky. I am a woman.” In Kartika’s vision of the world there is room for everyone, and every perspective and experience offers something special that contributes to a wider and more inclusive understanding of the universal, human experience.

Dr. Christopher Basile PhD is a filmmaker, ethnomusicologist, musician, composer, teacher, writer, photographer and painter, based in Melbourne, Australia. He was Director of the feature documentary film "A Meeting with Maharsi Pamungkas" (2013) and he worked as cameraman, editor, composer, colour-grader and soundman for a feature documentary on religion in Java “The Java Spirit: Religious Diversity in Indonesia” (2012). As an Ethnomusicologist working in Indonesia, he has authored 'The New Grove Dictionary of Music & Musicians' and 'The Garland Encyclopedia of World Music' as well as other articles. As a recording engineer he has published his field recordings as CDs with several short videos he shot in Indonesia. He wrote, narrated and produced the Music of Outer Island Indonesia series for ABC national radio. He has contributed to Museum installations in the United States and Japan, and taught at the National Institute of Arts in Jakarta, Indonesia, inaugurating the first course in ‘Anthropology of Performing Arts’ there. As a musician he has performed on film soundtracks and with musicians and groups. He lives in Williamstown near Melbourne in Australia, with his wife Renike and their two sons. 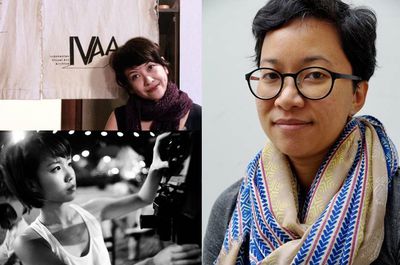 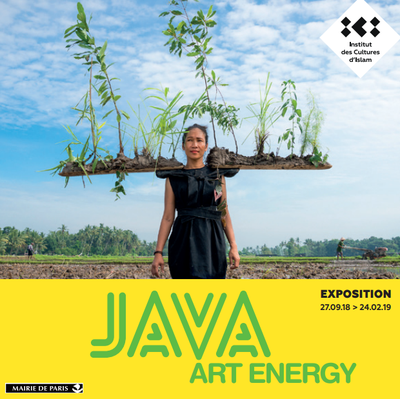