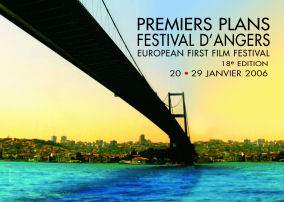 The organizers of THE PREMIERS PLANS FILM FESTIVAL (Anger – France) have just revealed the selection of films that will compete from January 20 -29 2006. The line-up for this edition presents an interesting selection of first short and feature films. It has also a list of 28 films from the major European Film Schools from where new talents are emerging.

Films, presented in this section can run for a European Film School award. Wining film directors can expect prizes that range from free studio services such as for the making of a Master for TV broadcast, the broadcast on a French TV programme, the nomination for the European Film Awards 2006, and cash prizes starting at 1.500 euro.

Three schools from the Visegrad group of countries that are new EU members are taking part in this 18th edition. The Szinhases Filmuveszeti Foiskola - SFF, will represent Hungary. The Czech republic is represented by the Prague based film school FAMU which will show two students projects and, the Polish (Państwowa Wyższa Szkoła Filmowa, Telewizyjna i Teatralna) school of Łódź will also present two of its productions: Notable among the other schools from the previous Eastern bloc is the strong participation of the German Potsdam film school – HFF

How different is today the film education in the Eastern part of the “Old Continent”? On the objectives side of the curriculum, the priorities are generally similar. Both in West and East Europe, film education systems aim to prepare the students to work under a variety of funding options, rather than to expect a full support from state funding. On the equipment side, the students have to integrate the new digital tools in their projects. On the content side, schools in the East are now offering a great freedom to explore the subjects of the student’s choice.

Another improvement in the film training programme is the better chance of having a work promoted. In most of the cases, the school will help for the promotion of the film, and student from countries such as Slovakia can expect to be seen not only in Europe but also in Asia as it was just the case with the animation film of Iveta Grofova who took part in the last Korean SICAF.

Film schools from Central and Eastern Europe such as the Polish school of Łódź are often an attractive choice for Western candidates. The cost of the study can be very little compare to the price applied by schools in the previous fifteen EU countries. But, in some case, the candidate may have to work twice as hard in learning the language previous to learning film – as it is the case for the school of Łódź  – where the programme at Polish cost is given in Polish (known to be one of the most difficult language in the world).

Nevertheless, every year these schools in East and Central Europe count an important number of foreign students. In 2004, the Danish Cultural institute organized an event called” Rendez-Vous With Denmark - Danish Days in Łódź with the presentations of films by the Danish graduates of the PWSFTviT Film School in Łódź. During the last year, among the 131 students, the Directing Dept counted foreign students from countries such as South Korea, the Scandinavian countries, South and North America and others.

Which are the schools

Łódź was the only big city near Warsaw that had not been destroyed. It quickly became a new major cultural centre of Poland. Soon, Łódź was chosen as the new centre of film production of the country and since it hosts the Film Studio and Film School.

As in most of the film schools, students in filmmaking in Łódź will have the choice between four different departments with both film and TV: orientation: the Cinematography Dept (including the animation), the Directing Dept, the Acting Dept and the Production Dept. After the completion of a four-years programme, the student can obtain a M.A degree in one of these fields. The school proposes others courses lasting 2 and 3 years.

Founded in 1947, a year before its Northern Polish neighbour, the Prague Film School FAMU is one of the oldest school in Europe. The school website reminds that FAMU counted many famous students who had to live the country following during the year of the communist terror; Frank Daniel and Milos Forman being the most known.

FAMU (Film and TV school) is one of three parts of the Academy of Performing Arts in Prague..The school is devided into 9 departments: still photography, feature cinema, documentary, scriptwriting, cinematography, sound, animation and production, and a recent interdisciplinary department: the Center of Audiovisual Studies.

Who are the students

Studying in a country from the Central or Eastern part of Europe is not only rewarding in term of relatively low study cost. It is also rich for the strong cultural live that these countries have succeed to keep even during the most difficult moments of their history. Candidates can also expect to find an environment with a generally high educational level. Looking at the selected works from the School competition at the Premier Plan Festival can provide an illustration of the creativity in the schools in Eastern Europe.

At Premiers Plans – Anger, the Polish school presents “CYRANO”, by Filip Marczewski who started his film studies in Łódź in 2002. The young filmmaker has been already successful with another production such as “BIEDA-ZIEMIA” (Poor Land) presented at the Brief Encounters latest edition (November 23 – 27, 2005).“POOR LAND”, which is listed in the Visegrad Library of documentary film is about the most ecologically destroyed region of Poland, with the highest level of unemployment. Filip was also selected at the 2005 edition of the Berlin “Talent Campus”

In the same Premiers Plans festival, Vaclav Svankmajer is one of the two-selected Czech students. Vaclav is the son of the Master of animation film and Czech artist Jan Svankmajer. Vaclav is born in 1975 and has already an impressive series of work presented in International film festival such as “RYBA” (Fish) presented in the Cine Foundation section  of the Cannes Film Festival. Vaclav develops different art forms that brings him from the stage to his workshop where he creates surrealistic environments (In Czech).

Each year, the Visegrad countries (the Czech republic, Hungary, Poland and Slovakia) produce an important number of high quality documentaries. Unfortunately, these movies are rarely crossing the borders of the country of production. In order to raise the visibility of Visegrad documentaries, the Prague-based One World Film Festival has initiated a database and video library of major documentaries produced in Visegrad countries after 1989.

Since Poland joined the EU, students from the EU countries have the right to study at the PWSFTviT Film School in Łódź for free like Polish students do. Same rights and same obligations, EU students who want to study without study fees will have to take the same entrance exam as Polish students, thus in Polish. The details concerning the exam can be found on the school's website - Polish version.

Asian Films not only in the Capitals