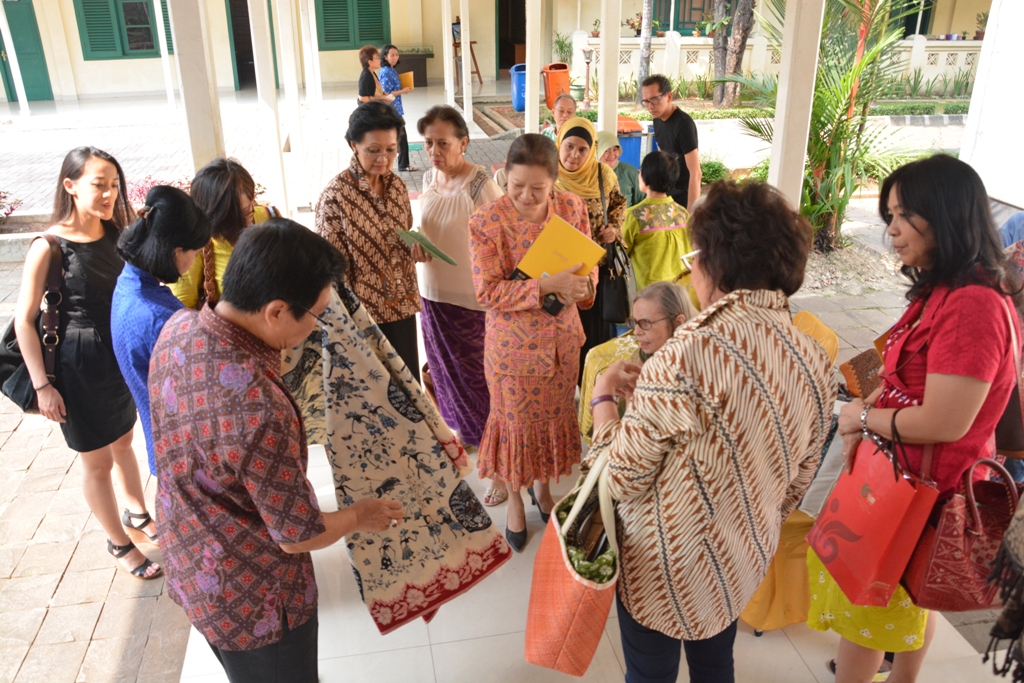 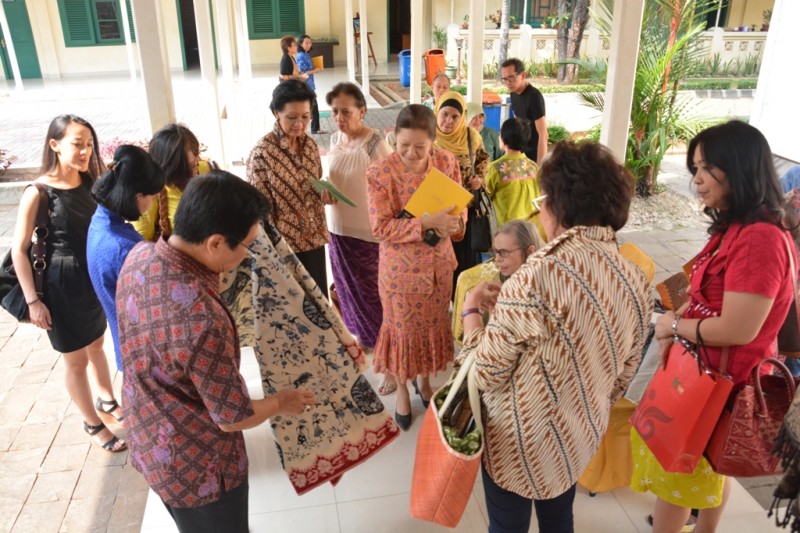 
“We were excited to share the passion on our Batik collection in Indonesia.  At the same time, we felt very nervous because Batik is an integral part of Indonesia’s cultural heritage and people’s everyday life.”

This was the shared impression museum curators and Batik experts had at the Curating Batik workshop, organised at Museum Tekstil Jakarta in Indonesia on 3 June 2015 and attended by more than 50 Batik experts and Batik lovers.

The Curating Batik event in Jakarta marks the first of several activities being organised as part of a study of Batik collections in selected museums in Asia and Europe, towards the set-up of a permanent Batik gallery at the Weltmuseum Wien in Vienna, which is currently undergoing extensive renovation and will re-open in 2017. Participating museums include the Weltmuseum Wien (Austria), Museum Tekstil Jakarta (Indonesia), Náprstek Museum of Asian, African and American Cultures (Czech Republic) and Museum der Kulturen Basel (Switzerland). These museums are members of the Asia-Europe Museum Network (ASEMUS), a network of over 100 Asian and European museums supported by the Asia-Europe Foundation (ASEF) since the year 2000. Through the ASEMUS platform, curators from the above-mentioned museums met and discussed their respective collections. The more they compared and shared, the more they learnt about  from each other’s collection and the areas in which they could benefit from each other’s expertise. The result is the Curating Batik project. This year, curators from Austria, Czech Republic, Indonesia and Switzerland have planned to meet for a series of workshops and study visits to exchange ideas and visit Batik collections towards giving inputs to the shaping of the Batik gallery at the Weltmuseum Wien.

The event in Indonesia in June 2015 marked the first step in this process. It included public lectures, workshops, gallery visits and field visits to Pekalongan, Lasem and Solo in middle Java in Indonesia. 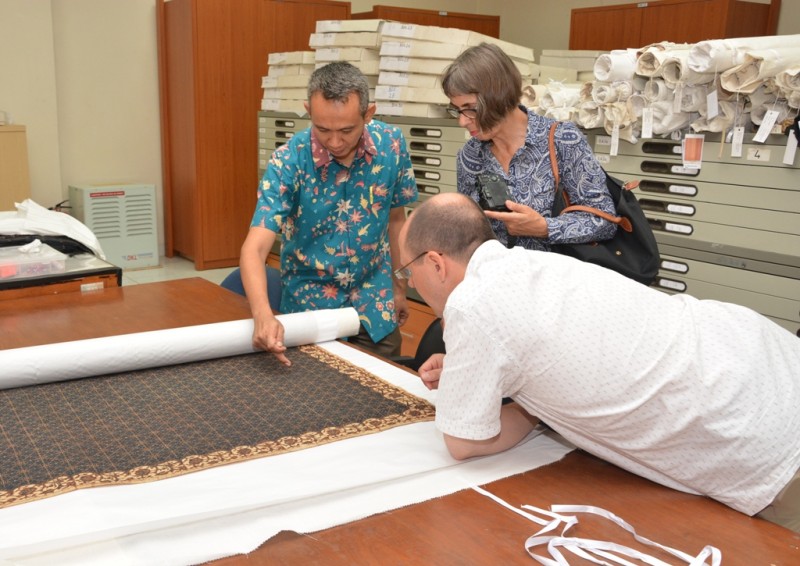 Curating Batik is a concrete example of the impact of networks that the Asia-Europe Foundation (ASEF) promotes; the idea of connecting people, sharing knowledge, exchanging information, and building partnerships. Curating Batik was selected through the 2nd edition of ASEF Creative Networks, an ASEF initiative that encourages collaborations among networks in order to reinforce the dialogue between cultural professionals from Asia and Europe.

At the Curating Batik workshop in Jakarta earlier this month, Dr. Jani Kuhnt-Saptodewo, Curator of Insular Southeast Asia, Weltmuseum Wien mentioned that her museum has almost 300 pieces of Batik: ‘The first collection is a souvenir from the Novara Expedition (1857–1859), the first large-scale scientific, around-the-world mission of the Austrian Imperial war navy. The acquisition from Java entered the museum in 1858. Therefore, it is considered ‘very old [Batik] material. The British Museum owns an older fabric from Governor General Raffles dated back around 1820.’  Dr. Jani Kuhnt-Saptodewo also added that it made sense to collaborate with the Náprstek Museum in the Czech Republic for their shared connection of “the Austro-Hungarian expedition around the world [that] lasted from 1857 to 1859 in which in 15 – 21 April 1858 was in Singapore and 5 – 29 May 1858 was in Batavia. Scientists who participated in the expedition were Dr. Novara Karl von Scherzer (Anthropologist) and Dr Hochstetter (Geologist/the first Director of the Museum of Natural History Vienna).”

Dr. Richard Kunz, Curator of Southeast Asia, Museum der Kulturen Basel, Switzerland, mentioned the Swiss-Indonesian connections in Batik during his presentation. Although his museum has a small number of Batik textiles, it also has interesting Batik tools and process samples, as well as great samples of Batik imitation. So the challenge for him would be the approach to curating the collection. ‘What is a potential of the collection? What story lines can be developed? What message do we want to convey with an exhibit?’ ‘Indonesia, most particularly the island of Java, is the area where batik has reached the greatest peak of accomplishment. The Dutch brought Indonesian craftsmen to teach the craft to Dutch warders in several factories in Holland from 1835. Factory work in Switzerland begun in the Valley of Glarus in the 18th century by imitating fabrics from the Orient and Far-East. The Swiss produced imitation batik in the early 1940s. A wax block form of printing was developed in Java using a cap.’ 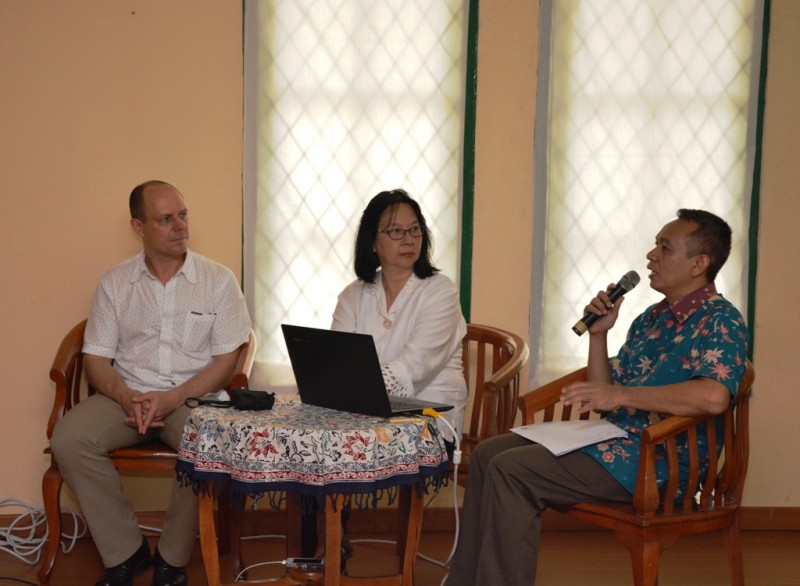 The collaboration with Museum Tekstil Jakarta has provided the curators opportunities to explore the museum’s rich collection and exchange information. Benny Gratha, a loyal volunteer at Museum Tekstil Jakarta since 2005, has been serving as an informal curatorial assistant at the museum. Through these years, he has built up extensive knowledge on Batik through ‘Museum Tekstil Jakarta’s permanent collection which is one of the most comprehensive collections in the world of a broad range of Indonesian textiles including warp and weft ikat cloths, batik, embroideries, beadwork and multifarious appliqué techniques, tapestry weaves, supplementary warp and weft textiles and from all over the Indonesian Archipelago. The Museum continues to grow and develop to respond to the needs of its visitors. Periodically throughout the year, it cooperates with private collectors and various institutions in holding short thematic shows in between its regular displays.

During their field trip in Indonesia, the curators will undertake field research and documentation towards their exhibition. Dr. Jani Kuhnt-Saptodewo will be travelling with Dr. Hwie Liong Kwan, Independent Batik Expert, to the middle of Java (Pekalongan, Lasem, Solo) to document batik production, and interview batik producers. In the last decade, Dr. Kwan has been studying Batik in his hometown and encouraging the local community to preserve the technique as part of creative economies.


He said, “The city of Pekalongan itself is known for its distinct Batik Pesisir or Coastal Batik which features vibrant colours and patterns. The batik produced by the skilled artisans here reflects multi-cultural influences from Chinese, Dutch, Malay, Japan, the Indies and Arab nations. The beauty of batik made in Pekaolongan has been recognized throughout the world.”

Dr. Kwan believes in the importance of raising awareness among the locals to cherish their heritage and preserve it. The best way to do this is to prove the impact of creative workers on regional unemployment. He has also been organising workshops for local artisans, organising a platform for exchange, and featuring their beautiful crafts.

The support from ASEF under the ASEF Creative Networks 2nd edition enables the curators from Indonesia to travel to Austria, Indonesia, Czech Republic and Switzerland. There, the curators will take on residencies and study as well as identify the Batik collection in each museum. They will also share their extensive knowledge through a number of workshops. Moreover, they will provide consultation on the selection of artefacts for the permanent Batik collection at Weltmuseum Wien which is due to open in late 2017, and the upcoming exhibition at Museum Der Kulturen Basel in 2016. The curators from both museums are open to the idea of collaboration, co-research and co-funding, and are willing to hold further discussions for potential collaboration.
More information:

Curating Batik | workshops on Batik collections in Asia and Europe 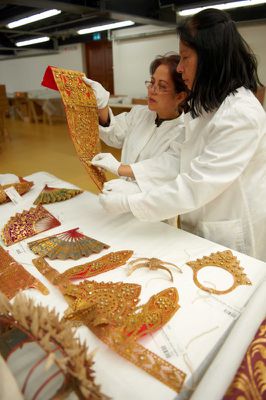 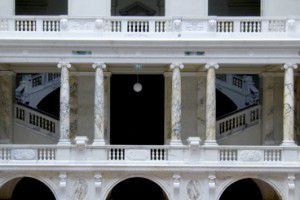