For the film animation industry, the place to be in June is the French city of Annecy. The capital of the Haute-Savoie, which is situated at the southern edge of the Lac d'Annecy, hosts an animation Film Festival that many considers as “the Mecca” for any frame by frame or computer assisted animated video or film.

For its 30th edition, the festival received some 1,732 films from 62 countries. The selection committees have chosen 213 films from 35 countries. All the presented films have been completed after September the 30th 2004.They are going to be shown in the five different sections of the festival: short and feature films, commissioned films, TV films, graduation films, and internet films.

The 2006 edition may show disappointing for that it is marked by a little number of ASEM – European films from the new members states; two productions from Estonia, two Polish films, one Hungarian, and one Czech film only. Asian ASEM countries are also under-represented by Japan, Korea and just three Chinese films.

This situation is not reflecting the revival of animation film production in these regions. The just closing BIMINI film festival in Riga – Latvia shows a production year 2005 rich in animation of all types from the Baltic States, from East Europe and also from Asia. So, why such a little number of non-Western film productions at the Annecy festival? The Annecy selection committees have their own rules and also some tendencies.

Looking back at the previous edition of the festival recalls that Eastern European films have been awarded recently. At the 2005 edition The Cristal award for the best feature animated film went to the Hungarian film “THE DISTRICT”. ( NYOCKER) - a movie that the Karlovy Vary film catalogue considers as “A post-Communist South Park. With the potential to become a cult movie.” The same Hungarian film also won the Grand Prix of SICAF 2005.  (Here's the clip).  A year later, we still love its wild tuned mix of 2D, 3D computer animation.

A DIVERSITY OF TECHNIQUES AND SENSITIVITIES

At the 30th edition of the Annecy film festival, animation goers will have the chance to see the latest Czech film by one of the most prominent Master in puppet animation. Bretislav Pojar - a regular guest of Annecy comes with his short film “HIROSHI - TEARS IN THE WIND” The film is based on a story written by the Japanese writer Yeto Sato. Far from the Urban – jungle universe of the Hungarian awarded movie, this short also illustrates the diversity of techniques and, sensitivities that Annecy tries to reflect.

The Czech film on a Japanese script goes about the friendship between a little boy from a city and a man who hosts him in his cottage in the mountains, far away from civilization. In a recent interview published by the Czech film commission Pojar tells about the universality of the subject. When asked about the difficulties to understand the world that he had to depict (the story takes place in Japan, and it is a story about a Japanese boy). “After all this is a story of a child... It could equally be European or North American…”

More than the setting and script, the Czech director could have find difficulties to catch the audience interest with the technique of animated puppet. Gene Deitch - one of the rare American who was admitted to work in the Czechoslovakian animation film studio during the Communist period reminded us that “Puppet style of animation may stand difficult to follow by the audience of countries without a long tradition of puppetry as is the Czech Republic”.

In most of the Western country, the animation often goes with a higher level of realistic expression. “The Lipping – which is the movement of the mouth of a character  – needs to be more present when a character speaks in a Western production”. The long tradition of puppet performances in Bohemia has transformed the audience interest. The audience there seems to prefer less realistic performance that allows a higher degree of interpretation”.

In Annecy, the selection committees will have also varied expectations according to its composition, which change every year. The selection of films in Annecy is also the selection of a festival, which hosts the most important market of animation films in Europe. All these elements come into consideration at the moment of selecting the films for the different sections of the festival.

Instead of expecting the presentation of their films at the Annecy film festival, some animation filmmakers form both Asian and European ASEM countries have preferred other festivals in Central and East Europe.

The closing ceremony of the 4th International Festival of Animation Films BIMINI 2006 took place on April the 9th. During the five days of the festival more than 200 films from 31 countries were presented to the Latvian audience. Films shown at BIMINI were judged by two juries: the children jury and a professional jury.

The Best Debut film went to “EAT DOG CAT MOUSE” by Kwok Fung Lam a film commissioned by CHANNEL 4 in the MESH scheme. Kwok Fung Lam also developed his story in an interactive game where you will play the mouse eating rice, the cat eating mice, the dog eating cats and...

Ann Xiao is one out of four animation artist whose digital film was also commissioned  by Channel 4 - Mesh scheme. Before moving to London in 2003, Ann was an award-winning comic artist in China. She made her first animated film "The Uncertain City" during her MA in Camberwell College of Arts. Her animation was selected for Onedotzero 05. The same Onedotzero organizes animation film events in London, Paris and Prague.

In conclusion, June maybe for opportunities to be seen in Annecy, but between April and June, don’t forget the other options that are the Latvian BIMINI and the Czech ANIFEST in the South of Bohemia. ANIMAFEST competitive festival, which offers also a  cash 3.000 euro award – proposes a fantastic animation programme from May 04 to May the 10th. An occasion also to see some of the 184 films entered by the Czech  Republic, Slovakia and Poland along side with 17 other countries.

The popularity of Czech films in Japan

The current situation of the Czech animation film industry 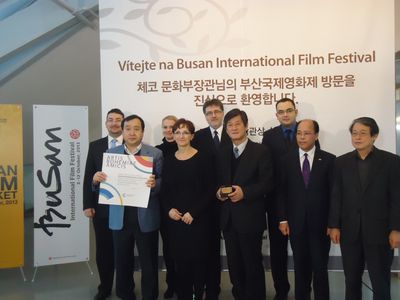