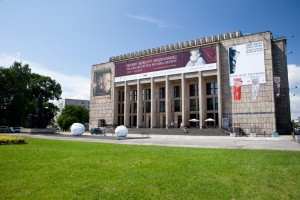 The National Museum in Krakow was established as Poland’s first national art collecting institution in 1879. Until the end of the First World War, it was the only such large museum accessible to the public on Polish soil.  The collecting process was begun with “Nero’s Torches”, a painting presented to the city of Krakow by its creator, Henryk Siemiradzki, with the intention of creating a gallery of national art in the Sukiennice (Cloth Hall). Within the next few days, more gifts were received from artists and collectors, and the City Council adopted a special resolution, founding the Museum. Initially, the collecting focus was on works of contemporary Polish art, much less on foreign works. This profile evolved in time: at the beginning of the 20th century the holdings were expanded to cover also works of decorative art, numismatics, arms and armour, archaeological and ethnographic objects, historical documents and memorabilia, and art of the Far East. After Poland regained its independence in 1918, the Museum’s storage and exhibition space proved to be insufficient for its holdings. Fund-raising activities were thus begun with a view to building a new seat for the Museum. The design of what is now known as the Main Building was widely acclaimed as one of the most advanced museum concepts in contemporaryEurope. Unfortunately, the outbreak of World War II interrupted the construction works and the building was in use unfinished until 1970, when the project was resumed, though it was not completed until 1990. In 1950, the National Museum in Krakow absorbed the Princes Czartoryski Museum- along with its Library and Archives - the oldest private museum. Since then, the National Museum has been the administrator of the holdings and buildings of the Princes’ Czartoryski Museum, despite the fact that in 1991 these were taken over by a foundation set up by Adam Karol Czartoryski, the heir and representative of the Czartoryski family. Collection of the Far Eastern Art Department [caption id="attachment_1463" align="alignnone" width="300" caption="KATSUSHIKA HOKUSAI, Fuji Mountain, National Museum in Krakow Collection"] 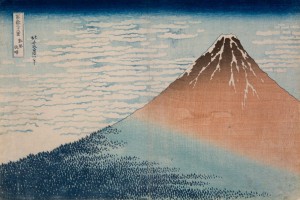 [/caption] The collection of Far Eastern art at the National Museum began with two Japanese vases featuring scenes of silk production, a gift from Wiktor Osławski in 1892. Today, art of Japan still holds pride of place in the collection of over 12,600 items, which also originate from China, Korea, Mongolia, Tibet and – to a lesser extent – India and Indonesia. The largest are the holdings of Japanese art, especially graphics of the ukiyo-e school from the collection of Feliks Jasieński (over 4600 sheets, illustrated books and albums). The second largest and most valuable section of Japanese art is arms and armour. The collection of 740 tsuba sword guards and decorative elements of the sword hilt illustrate all the major techniques of sword making and ornamenting and all decorative motifs. From the 50 swords on view (katana, wakizashi, tachi) some are showpieces of top artistry, just as a dozen or so helmets, masks and armours. A small but interesting collection of Japanese lacquer includes mainly inro cases for medication with decorative netsuke toggles (18th–19th century), as well as various types of receptacles, goblets, tables, combs, etc. The drawing card among the Japanese fabrics is the collection of 30 obi sashes, a few kimonos and tapestries, mostly from the 18th and 19th centuries. In the Chinese collection, the most remarkable is the set of some 400 pieces of pottery, spanning the period from the Han dynasty to the Qing dynasty (2nd century BCE to 19th/20th century), especially the group of the oldest stoneware vessels, distinguishable for their supreme artistry and high historical value. The Japanese woodblock prints and other objects in the collection of the National Museum are often displayed at exhibitions in Poland and in other European countries. Displays organised in Japan always attract large audiences. In the history of this ample collection, the period of World War II was, unfortunately, marked by considerable loss, as around 500 of the most valuable prints were stolen by the Nazis. Nevertheless, thanks to donations to, and purchases made by, the National Museum, its collection of woodblock prints, currently exceeding 4600 items, is one of the largest and finest in Europe. The holdings of the Department of Far Eastern Art had to be deposited at th Manggha Museum and the collection is still undergoing treatment by curators and conservators of the National Museum in Krakow.

ASEMUS is a magnificent opportunity to contact other curators, scientists and researchers involved in the matter of Asian art and culture. It is a platform to publicise one's collections and compare materials for research. We’ve already experienced exchange of data and information, giving lectures and recommendments of specialists or people working on a certain subjects to our colleagues worldwide. Another idea we are discussing in our Museum is to exchange internships. That is short term personal exchange. In order to learn and teach. And a third suggestion for future for ASEMUS – is to organise conferences and meetings

Musée Cernuschi - Museum of Asian Art of the City of Paris, France