Established in 1981, Fongnaam is not only a remarkable ensemble of the very best Thai musicians, it is also at the forefront of modern composition,both in traditional and experimental styles.

Fong Naam's work has not only won respect in Thailand but has also been received with overwhelming warmth and enthusiasm on its many overseas tours, most of which have been to Europe though the ensemble has also performed in Japan,Australia,the USA and Canada.

By the mid-20th century Thai classical music was in a relatively stagnant state. The aggressively modernizing policies of Western-looking Thai politicians during the 1940s and '50s led to a widespread view of traditional Thai arts as being, at best, culturally static or, at worst, culturally backward. By the 1960s many of the traditional musicians patronized by the royal court in Bangkok held dogmatic, inflexible and zealous attitudes toward the maintenance of stylized traditions and imagined a rigid compartmentalization dividing genres.

In the effort to revitalize the classical arts and to introduce them to a new and younger Thai audience as well as to a foreign audience, master musician Buyong Ketkhong and his energetic American student, Bruce Gaston, founded the Fong Naam ensemble in 1983. The group is named for the first traditional piece it performed in public. The tune, an ancient melody once performed to accompany the offering of food to monks translates into English as either "bubble" or "sponge."

While maintaining contemporary classical traditions, the ensemble has also revitalized and recorded historic ensembles, repertoires and instruments and has blazed the trail for contemporary and collaborative modern neoclassical and intercultural Thai composition. 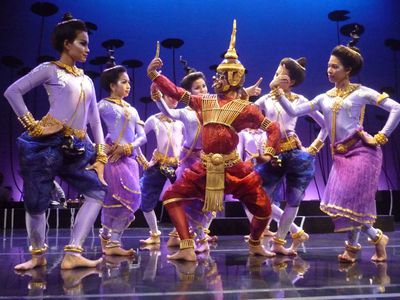