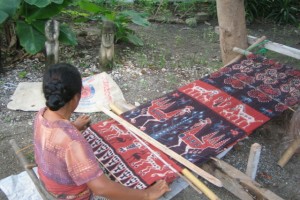 [/caption]
Ikat textiles are found in cultures all over the world. Ikat is being woven in Argentina, Bolivia, Ecuador, Guatemala and Mexico and also in Uzbekistan in Central Asia. India, Japan and several South-East Asian countries have long histories of ikat production. Among the most admired ikat come from the island of Sumba and also from Sarawak.  The pua kumbu shares many similarities with the hinggi of Sumba, yet the legends, symbolism and rituals that surrounding the two vary. An exhibition is being held at the National Textile Museum, Malaysia on these two ikat traditions and to accompany the exhibition there will be a forum. A panel of speakers compromising: Edric Ong, Marie Christine Tseng & Judi Knight Achjadi will deliberate on the development of the weaving and lifestyles of the Sumbanese and Ibans. They will also examine the balance between aesthetics and practicality of these ikat textiles. [caption id="attachment_1472" align="alignnone" width="300" caption="Detail of pua kumbu, National Textile Museum Collection"] 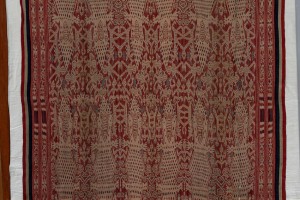