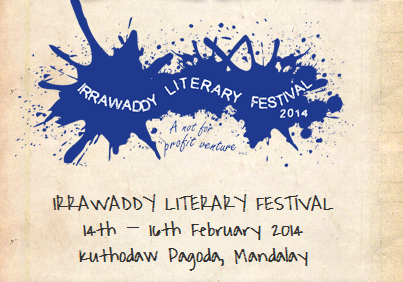 Following the success of the inaugural Irrawaddy Literature Festival in Yangon, the ILF 2014 heads to Mandalay for Myanmar's next literary event from 14-16 February 2014. The Irrawaddy Literary Festival 2014 will be held in the grounds of the magnificent Kuthodaw Pagoda in Mandalay. The world’s largest book, inscribed on 729 white marble tablets, dots the the spacious grounds of the Pagoda, which was recently designated a UNESCO World Heritage site. Set within shaded avenues, bordered with fragrant starflower trees, the compound is the perfect backdrop to the Festival’s eclectic programme of events. The ILF 2014 is proud to announce the participation of a wide range of highly esteemed authors, journalists and broadcasters. It is also delighted to have secured the active participation of some of the region’s most influential literary agents and publishers. As for our esteemed authors, ILF 2014 is especially pleased to welcome back Jung Chang and Fergal Keane, and would like to extend our warmest wishes to all those taking part for the first time – an exciting range of wonderful writers covering a plethora of genres. The list of names includes this year’s Man Asia Prize winner, Tan Twan Eng, Louis de Bernieres, Caroline Moorehead, biographer of many the 20th century’s most notable people, as well as Dame Joan Bakewell and Martha Kearney, two of the best known and respected voices in broadcasting today.

As with the inaugural Festival there is also a strong Burmese/Myanmar presence, close to a hundred writers taking part, all eager to share the still new experience of a truly open forum for the exchange of thoughts, poetry and prose and much more.