News & events > Exhibition: "What is Europe? Views from Asia"

Exhibition: "What is Europe? Views from Asia" 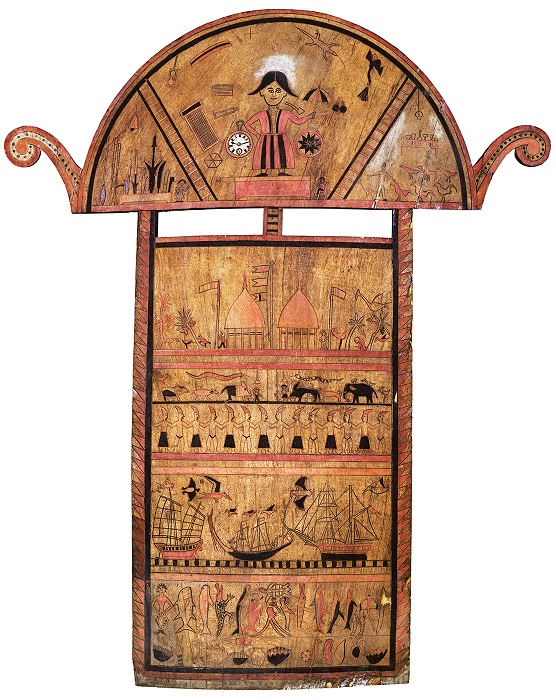 Between 23 August and 22 October 2018, the British Museum, London, an ASEMUS member, presents an exhibition entitled "What is Europe? Views from Asia". Exploring the interconnected relationships between Asia and Europe from the 18th century to the mid-20th century, this exhibition looks at Europe from the outside.

Examining perceptions of Europe through a series of objects from Japan, China and South Asia, this display illustrates how encounters between Asia and Europe are often far more nuanced than has been previously presented. The exhibition includes a wide variety of objects that challenge common preconceptions – from prints, magazines and paintings to sculptures and protective figures.

Two objects from the Nicobar Islands in the Indian Ocean shed light on the complex artistic response to European trade and power relations. The Islands were colonised by Denmark in 1756, and then sold to Britain in 1869, and are now a union territory of India. A Nicobarese hentakoi (painted board) shows the selective adoption of European practices and goods, and the importance of local objects deemed valuable and symbolic. Hentakoi were thought to have protective powers, and this example shows a European ship, a local vessel and a Chinese boat, as well as a deity flanked by a compass and chronometer. A kareau (protective figure) from the Nicobar Islands is also included in the display – portrayed wearing a European pith helmet.

Subtle examples of subversion and dissent are also on display, such as the reception of European religions in Asia - a porcelain figure of the bodhisattva Guanyin and child shows this relationship. Made for hundreds of years for Buddhist devotion in China and Japan, in the 18th century some manufacturers added Christian imagery to these statues in the form of a mantilla – a Christian head-covering. Christianity was forbidden in Japan from 1587–1859, so sculptures like this, made for European export markets, allowed ‘hidden’ Christians to worship in secret in Japan.

The ridicule and mocking of Europe is also represented in the exhibition. A 1943 manga magazine mocks Allied wartime leader Winston Churchill, and an earlier print made during the Russo-Japanese war of 1904–1905 ridicules the Russian Navy, describing them as ‘aimless boats’.

The display contains examples of the multi-faceted relationship and mutual adoption of Asian and European artistic styles. Instances of Western influence on Asian artists are shown alongside Chinese porcelain made for export to markets in Europe. There are also links between individual artists in the exhibition – German printmaker Käthe Kollwitz and Chinese artist Li Hua.

Together, the objects in this display reveal the nuanced and complex relationships between Asian and European nations from the 1700s to the mid-1900s, presenting narratives from many different backgrounds and encouraging debate about the present.

Complementing the exhibition, several talks and panels have been scheduled in September and October. For additional information about "What is Europe? Views from Asia", please visit http://www.britishmuseum.org/whats_on/exhibitions/what_is_europe.aspx