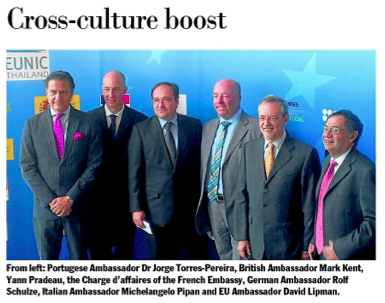 European organizations join in the promotion of European culture and European–Thai cultural dialogue and exchange in the set-up and first project of EUNIC Thailand.

The Alliance française, British Council, French Embassy, Goethe Institut of Germany, Instituto Camões of Portugal, the Italian Embassy and the Spanish Embassy – with the support of the Delegation of the European Union to Thailand – have established EUNIC Thailand (European Union National Institutes of Culture Thailand).

EUNIC Thailand promotes, with shared resources and on a project-by-project basis, the diversity of European culture, and stimulates intercultural dialogue and cooperation between Europe and Thailand. The member organizations will continue to develop their separate activities.

The first activity organized by EUNIC Thailand was a European Languages Café to mark the European Day of Languages on 26 September. Further EUNIC activities that are being developed for the coming year include a street art festival with 30 young artists from different European countries and Thailand; a smart phone application with information about the “races of Europe” in the Thai capital; and events related to the Bangkok World Book Capital 2013.

The Presidency of EUNIC Thailand rotates between its members. Currently, it is held by Jeremy Opritesco, the head of the cultural section of the French Embassy in Bangkok, with British Council Director Chris Gibson as vice president.