Architecture in Islamic Arts: Treasures of the Aga Khan Museum 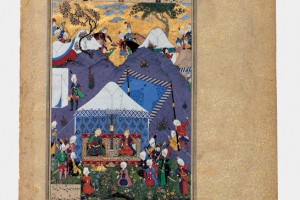 Treasures of the Aga Khan Museum: Architecture in Islamic World is a travelling exhibition of objects and art from the Aga Khan Museum collections, which has been touring renowned museums in key European cities. Come 30 March, it will open at the Islamic Arts Museum Malaysia. It is currently on display at the State Hermitage Museum, in St Petersburg, Russia.

Architecture is one of the most visible manifestations of Islamic art. It has flourished across the Islamic world for over 1,400 years. Majestic domes, peaceful courtyards and towering minarets not only punctuate the landscape with their grandeur, but also serve as a unifying element in Islamic art and heritage. This exhibition has been organised to bring attention to the importance of architecture to the artistic traditions of the Islamic world.

The exhibition is divided into six sections: 'Sacred Typographies', which explores the sites and monuments of Islamic pilgrimage through paintings and drawings; 'Religious and Funerary Architecture', which examines mosques and commemorative shrines; 'The Fortress and the City', which encompasses forts and fortified towns; 'The Palace', which looks at the residences of royal families; 'Gardens, Pavilions and Tents', which discusses the arts of shelter; and 'Architecture and the Written Word', which focuses on architectural spaces contained in miniature painting. Among the most notable artefacts on exhibit are: a miniature entitled “Emperor Jahangir at the Jharoka Window of the Red Fort in Agra”, painted in 1620 by Nadir a-Zaman; a 16th century folio from the most famous series of paintings in Muslim art, the celebrated Shahnama of Shah Tahmasp; architectural elements like muqarnas and ornamented wood pieces from 15th century Spain; glazed turquoise earthenware elements from late 14th century Central Asia; tiled arches from 15th century Egypt; ornamental doors from 9th century Iran and 16th century Iznik tiles from Turkey. The exhibition at The Islamic Arts Museum Malaysia will mark the first time that the collection will be displayed in Southeast Asia. It will run from 30th March to 29th June 2012. After its run in Malaysia, the exhibition will be on show at the Asian Civilisations Museum, Singapore.